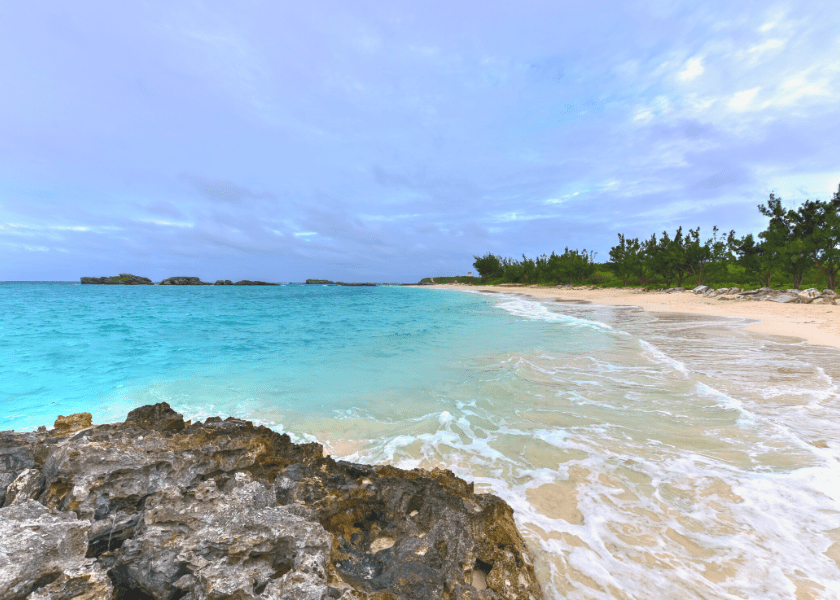 Into the Ocean: Clearwater Beach

Clearwater has a special charm for those of us who remember when it was part of the American base and therefore forbidden territory to most Bermudians. Once the base lands were returned to us, in 1996, it became a public beach park and has since become a much-loved swimming spot, thanks to its two sandy beaches and its seemingly endless stretch of sheltered ocean. In fact, the beaches are strictly speaking “artificial” since they were made for army personnel use after landfill was created to make the runway for the base. Round the corner is Turtle Bay, completely natural and named after the green turtles that once bred prolifically here. Turtle grass is plentiful here. Both beaches are good for snorkelling.

Clearwater is ideal for families, with water shallow enough for the small children and deep enough not to frustrate those of us who want a serious swim. There’s always a lifeguard during the summer season (and another at Turtle Bay).The playground here is an added attraction should the children tire of the beach. Bathroom facilities, complete with changing rooms and showers, are also on hand.

Another reason for Clearwater’s popularity with locals is the nearby restaurant, with full bar, offering Bermudian fare as well as entertainment, in particular the Gombeys, the uniquely Bermudian troupe of drummers and dancers. If you want to experience a true Bermudian flavour, Clearwater is perfect. For a quieter experience, avoid weekends and public holidays.

Clearwater, accessible by motorised transport, was once the property of the American base. So was neighbouring Cooper’s Island, venue for NASA’s tracking station, just a little further on from Turtle’s Cove behind the large gates. Today it is a nature reserve
and once past the gates, you are not allowed to use any kind of mechanised transport. You have to walk. Strictly speaking, Cooper’s Island is no longer an island since the Americans used landfill to attach it to the mainland off St. David’s. However, it still has an isolated atmosphere. Islands off its coastline, such as Nonsuch, and rocky outcrops are breeding grounds for our endemic cahows and that is why it’s important to follow strict park etiquette. In addition, we are hoping green turtles will return to breed, especially as turtles did hatch there in 2015, and they too need protection from noise and light. Cooper’s has a variety of beaches, plus an observation tower with panoramic views of Castle Harbour and an exhibit on flora and fauna you can find in the park. Opposite Clearwater is a nature trail loop, which allows views of native and endemic flora and which at one point hugs the Castle Harbour coastline.