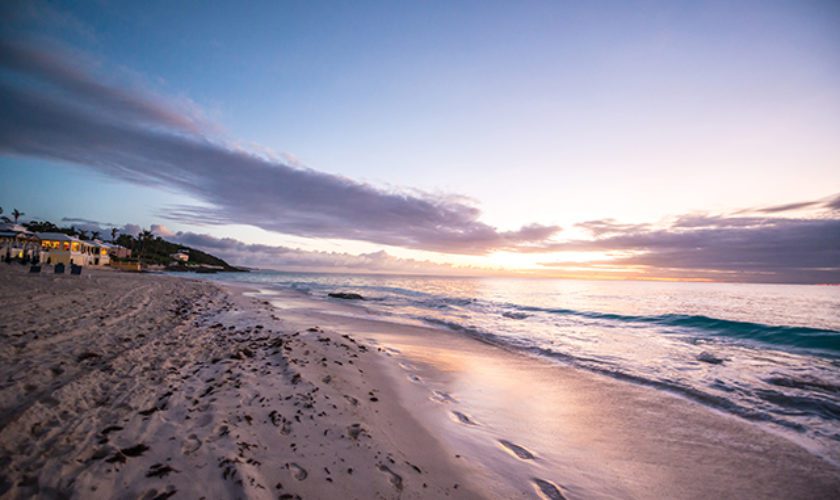 Into the Ocean: Elbow Beach

Early in our history of tourism, Elbow Beach, formerly “Elba Beach,” was more iconic than Horseshoe Bay, thanks perhaps to the hotel built on the site in 1908. Thousands of tourists would come to enjoy sun and sand here, especially once North American students began to descend for College Week from the 1950s on through the 1970s. On Christmas Day, a new tradition has evolved in recent years—thousands of locals arrive for a Christmas swim plus quantities of champagne. Still very popular with visitors from abroad, the beach is best early morning and evening for a less-crowded experience during the summer season.

Elbow is part of a magnificent strand of sand stretching from what is now the Coco Reef Bermuda hotel, past Elbow Beach Hotel to Coral Beach on the western end. Only one part of the beach, to the west of the hotel and to the east of Coral Beach, is public where it is permissible for everyone to swim and sunbathe. That said, mornings and evenings people often walk the whole stretch, which once we more appropriately dubbed Sandy Banks. Sometimes, especially after windy weather, beachcombers can find purple ocean snails. Enthusiastic swimmers love this part of the ocean for its easy access to deeper water and for its proximity to the reef where snorkelling is excellent. Elbow Beach is also known for spectacular sunrises—so much so that an Easter Sunday sunrise service on the sand is held by Christchurch, Warwick. We like swimming after dark here, especially on full moon nights when the moonlight shines upon the water. No wonder Elbow Beach has often been the venue of marriage proposals.

Elbow Beach is mentioned in several of our nineteenth-century travel books before a hotel was dreamed of. Two hundred years ago the sand here was constantly on the move, forming sand hills, the name formerly given to the area. Susette Harriet Lloyd in her Sketches of Bermuda explains how the encroaching sand buried whole trees and cottages.

Later, Elbow would become famous for another reason: the 1915 wreck of the BR. S.S. Pollockshields on the reef off its beach. Thanks to the heroism of Antonio Marshall and his men who rowed in a whaleboat to rescue the crew, everyone was saved except the captain who drowned while trying to save the ship’s cat and kittens. Today, the wreck is a popular site for scuba divers.

The history of the beach and of the hotel, founded in 1908, is vividly recorded in local artist Graham Foster’s mural painted on two walls opposite each other at the entrance of the newly renovated conference rooms inside the Elbow Beach Hotel. It’s well worth a visit for its wealth of detail.