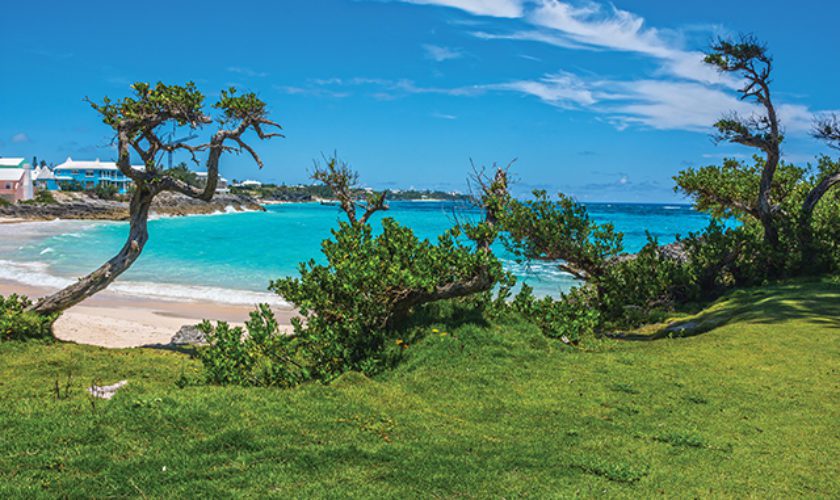 Into the Ocean: John Smith’s Bay

A local wag often explains to tourists that he knew the John Smith after whom this beach is named because, he says, they lived next door to each other. Since the relevant Captain John Smith was a famous seventeenth-century explorer who wrote The General Historie of Virginia, New England and the Summers Isles in 1624, we have every reason to disbelieve him. In fact we’re not sure John Smith ever visited Bermuda at all, let alone this bay. Lots of other people have visited, however, John Smith’s Bay being hugely popular with locals. Easily reached from the nearby bus stop, this half-moon-shaped cove descends gently down from a small area of grassy parkland, much used by our locals for picnics on weekends and public holidays. So if crowds bother you, it’s best to avoid those times.

This beach, like others on the south shore, is subject to rip tides. But the ocean here is fairly sheltered even when on the western side of the beach the surf roars in. On the eastern side, low overhanging cliff formations give the illusion of caves and are good spots for refuge from direct sun. A rocky promontory running towards the water in the centre of the bay effectively cuts it in two. Also on the eastern end and out to sea is a rock formation closely resembling a man driving a boat. A lunch wagon in the parking area sells snacks during the summer.

Generally, swimming in Bermuda is a fantastic experience but there are a couple of precautions we take to ensure our safety. On beaches without lifeguards, it’s best never to swim alone. On the south shore beaches particularly, rip tides and rip currents can occur, especially during the hurricane season from June through November. When they do occur, the Bermuda government puts out warning signs requesting everyone to stay out of the water. It’s wise to follow the warning, however tempting the surf might be to some. Should you have the misfortune to be caught by a current, stay calm and let the current carry you parallel to the shore until you catch waves that will take you back to the water’s edge.

Portuguese man o’ war is another danger, especially after stormy weather when these purplish-blue creatures are blown on to our beaches. The jelly fish has a balloon-like structure and long tentacles that give a vicious, sometimes deadly, sting. Avoid stepping on them while walking on the beach or brushing against them in the water. If you do get stung, rinse the affected area with salt water and soak it with vinegar, aftershave or alcohol. Use shaving cream to remove remaining cysts.