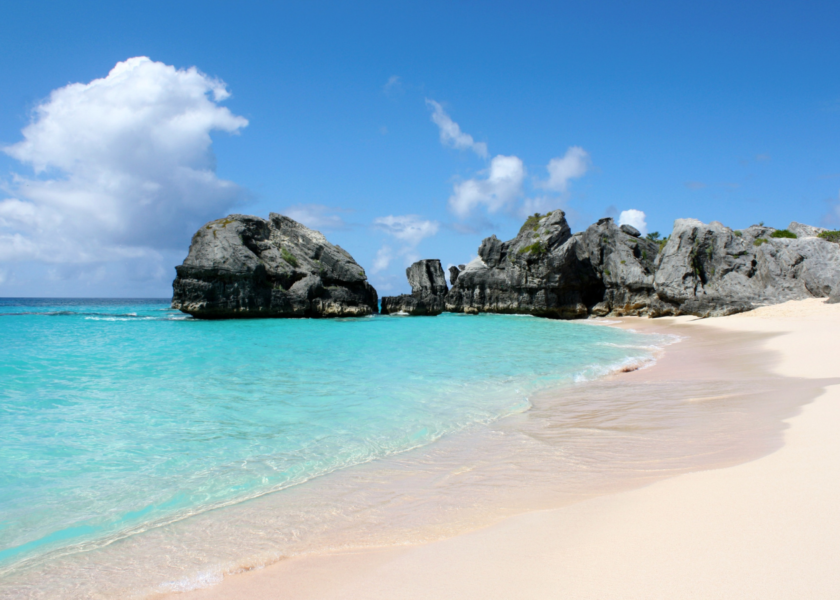 Into the Ocean: Warwick Long Bay

Even at peak season, Warwick Long Bay is never as crowded as some of our other major south shore beaches, allowing a far more private, secluded swimming experience. Apart from a public convenience, there are no other permanent facilities as there are at Horseshoe Bay, so we come here for the quiet and the natural, superb beauty of this bay. It is, as its name suggests, very long and its straight stretch of creamy sands beneath the clifftop contrasts dramatically with the turquoise of the ocean and ragged grey of the rocky boulders. Especially at high tide, on entering the water, you’ll soon encounter a sudden shelf on the ocean floor quickly taking you out of your depth. So swimming here may not be ideal for the less experienced, or for small children, particularly as there is no lifeguard service. Snorkelling is rewarding because of the reef so close to shore. Even from the shore edge, it is possible to see schools of parrot fish riding just below the crests of the waves, while further into the water you can see these blue/green creatures gliding in and out of the reef.

Warwick Long Bay is accessible from South Road, a short road twisting down to the car park where steps take you down to the beach. During the summer a lunch wagon and a concession stand in the parking lot sell snacks and rent snorkelling equipment. To the east, a trail takes you to the far more children-friendly beach Jobson’s Cove, where the water is shallow and sheltered. Shallow steps are carved out of the rock-face backdrop.

South Shore Park is an impressively long stretch of green, straddling the southern coastline of Warwick and Southampton parishes and containing a chain of picturesque coves and beaches, some half-hidden below the cliffs and the sand dunes. Horseshoe Bay and Warwick Long Bay are the two largest and best-known but others, such as Butts Beach, Stonehole Bay and Chaplin’s Bay, are also pleasant venues for swimming and sunbathing. They all feature dramatic limestone cliffs and formations, which provide crucial habitats for our longtails returning each February to breed and staying through September. You can see them constantly swooping in and out of the cliffs, their bleats plaintively vibrating on the air.

Other birds can be seen on the sands—sanderlings and ruddy turnstones scudding along the water’s edge. Bay grape trees with their plate-like leaves, coppery at certain times of the year, casuarinas, Spanish bayonet, beach lobelia, tamarisk and tassel plantare just a few of the flora commonly seen on our beaches and dunes. The park is easily accessed from bus stops on South Road, with tarmacked side roads leading down to many of the beaches. But the beaches can also be reached by walking along a crisscross of trails on the dunes, allowing for a more magical sense of discovery.