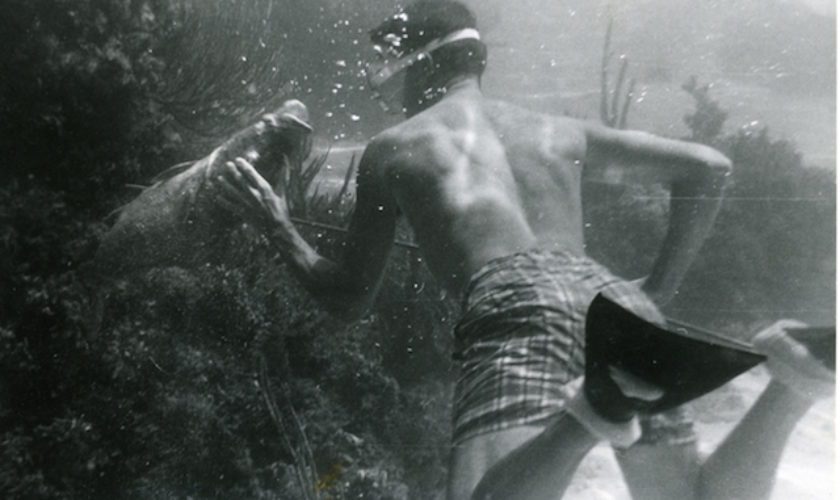 This article was taken from our archives. It originally appeared in the July 1950 issue of The Bermudian.

An exciting new sport has “arrived” in Bermuda this year. Some call it goggle-fishing, but few question that it has rapidly become a major sport on the island.

An expert pearl diver who is by happy coincidence also an accomplished billiards player would have the best of all possible qualifications for spear-fishing. However, almost any young or youngish man (or girl, for that matter) who swims well, has a zest for thrills and $15 for equipment, can become reasonably good at it.

The local version is a home-grown Bermuda sport and for twenty years an ardent but relatively unnoticed little group has been perfecting underwater weapons and technique for spearing fish on Bermuda’s reefs. For the last three years its popularity has gradually increased, but suddenly this year flippers, face masks, spears and spear guns have become best sellers in local sports shops. Several stores sell equipment, but surprisingly the undisputed headquarters of the sport is the Reid Street jewellery shop of T. M. Doe & Son. Barrell-chested, good-looking Ross Does, equally expert with a main spring or spear, “invented” the sport as a boy and at thirty-four is recognized as “the old man of Bermuda spear-fishing.”

Geographically it is impossible for a Bermuda baby to be born more than a mile from water and many of them learn to swim by the time they are three years old. Ross Doe was somewhat backward in that he did not learn to swim until he was five, but within two years he was joining in the popular juvenile pastime of underwater exploration using a home-made mask. Tired of just looking at fish he got a brass bow and arrow and started to hunt them under water. Young Ross had never heard of anybody else spear-fishing when he started but apparently the sport has been independently evolved wherever warm water, reefs and good fish have combined.

Spear-fishing is known in Southern California, the West Indies, the Mediterranean, Hawaii and many of the Islands of the Pacific. But the pointed but unbarbed spear (to be more prosaic, a 3/8 in. stainless steel reinforcing rod that costs about 7s. or $1) originated by Doe and popular with most local “bottom-scratchers” is probably unique to Bermuda. Spear guns that can catapult a short spear twenty or thirty feet are particularly popular in France, but partisans of the Bermuda spear somewhat derisively compare this to hunting pheasant with a telescopic gun sight. In still other schools of spear- fishing a short, hand propelled spear is used, but adherents of the “Doe system” insist that the longer spear makes possible a far stronger thrust and also simplifiees securing fish once they have been speared with the result that fewer are lost after spearing. Doe himself is so devoted to the sport that he refuses to engage in pedagogical arguments. He uses the long spear himself, but next door to his jewellery store he sells spear guns to those who like them.

As the game is played locally the bottom-scratcher puts on rubber foot-flippers, a rubber-rimmed, glass-fronted mask and, grasping in 11-ft. spear in his hand, slides over the side of a punt row boat and into the fascinating coral reefs that encircle Bermuda. He may float on the water and spot his prey before diving, or he may dive immediately and look for fish under the ledges of the reef. According to Mal Martin, an owner of The Reefs Beach Club who has been fishing with Doe for three years, the initial thrill of the sport comes with the dive because then “man is operating in the element of the adversary.” A coral reef is beautiful and enchanting, but close up the exotic sea fans, brain coral, rose coral and anemone are also somewhat ominous. On the surface it is a beautiful bright day (a cloudy one doesn’t give a spear fisherman enough light), but in the subterranean gloom even the gentle nudge of a beautiful Angelfish can startle a brave man.

The fisherman holds his spear as he would a billiard cue and propels himself through the water with his flippers. After sighting his prey and maneuvering it into position he gives a good thrust and spears it against the sandy bottom or the reef. He then grasps the spear near its point to prevent the fish sliding off, and brings it to the surface. Each fish has its own habits and the spear fisherman hunts accordingly. The Angelfish seems to know it is so slightly regarded as a food fish that only the novice will challenge him, so he all but chaperones the bottom-scratcher. To take a 100lb. Rockfish two or three spear fishermen will encircle him, and directed by a leader on the surface, guide the giant into position to spear against the reef. Despite its pedestrian name the prize catch of local spear fishermen is the vegetarian Hogfish which if found on reefs where reeds grow. The Hogfish rarely takes a hook and, living on the reefs, is almost impossible to net, but in addition to being a rarity, it is delicious to eat. The local technique for stalking Hogfish is to swim above and as the fish turns over to look up (his eyes are on his sides) he presents an excellent target.

The gasping novice recovering from his first dive can never believe he has been down such a short time. On the average a dive is rarely over 15 feet or three-quarters of a minute although Doe can go 50 feet and stay under over two minutes before surfacing. Few ears, either of Bermudians or visitors, can take this.

Bermuda conditions are nearly perfect for spear-fishing. The waters are clear and calm within the protecting reefs. Few of any other reefs in the world are known to have so many varieties of fish concentrated in such a small area, certainly not so many that are big, beautiful and good to eat. The knowing spear-fisherman never goes into the deep waters beyond the reefs where anything from sunken treasure ships to mermaids can be found, and the few civilized barracuda and sharks that venture within Bermuda’s reefs have never been known to molest man.

Louis Mowbray, Curator of the Governmnet Aquarium as well as arbiter of most things aquatic in the Colony, is always careful to give two warnings to would-be spear fishermen: (1) Be an experienced swimmer, and (2) Never go spear-fishing alone. Under water a big fish is often stronger than a man, and in excitement of battle a novice may struggle too long, lose too much oxygen and even “black out.” The expert will interrupt the fight to surface for air with the knowledge that although his fish will seek a hole, a school of gay but scavenging littler sergeant majors will follow and mark the hiding place.

Spear-fishing has something of the primitive lure of mountain climbing or big game hunting, but it isn’t a cruel sport. Spearing a fish is probably more humane than allowing one to suffocate after it has been taken on a hook. Presumably it will be some time before it is routine to see people striding down Front Street carrying 11-ft. spears, but with its increasing popularity the Bermuda Government has wisely moved to prevent the sport from becoming a sort of underwater pigsticking. No one person may take more than two of any one variety of fish or more than three Bermuda’s famous spiny lobsters in a day.

Despite the current enthusiasm spear-fishing isn’t on an organized basis. The rank amateur can wade out five feet along the South Shore and find plenty of fish to keep him busy. With reasonable care it is an excellent pastime on a family picnic, and Ross Doe’s seven-year-old son is such a devotee that he politely declines to go swimming unless it is to be combined with spear-fishing. Somewhat surprisingly it is an excellent spectator sport. Spectators enjoy it whether they sit in the boat to straighten spears and take off the catch, or put on masks (sometimes fitted with snorkels) to float on the surface and watch the considerably more violent activity underwater.

On Thursday afternoons and Sundays Ross Doe usually puts down his jeweller’s eyepiece and takes parties spear-fishing. After twenty years of devotion he is obviously delighted that his creation is becoming so popular, but his role as the local oracle brings him an increasing number of calls on how, where and when to spear fish. Sometimes the calls come when he should be fixing watches. “It looks like I’ll either have to take the phone out of the store of go into spear-fishing as a business,” he says. Few who have heard him talk about spear-fishing or watched him do it expect the phone to go.