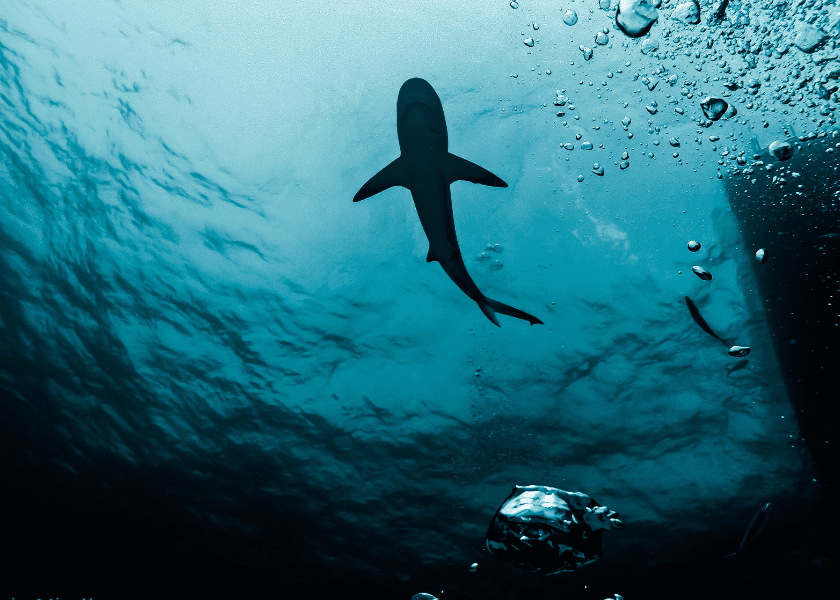 This article was taken from our archives. It first appeared in The Bermudian in 1954. It appears here exactly as it did originally.

Last month The Royal Gazette reported that a shark, reputed to be 15 feet long, was sighted in Hamilton Harbour, its dorsal fin cutting the surface of the water between the Paget and Pembroke shores.

Maybe this made some of our visitors nervous, but old-timers here merely remarked, “What of it?”

It is a long time since we last discussed the subject of sharks in these pages. Some years back, men from Hamilton Parish bagged a nine-foot shark which they had spotted loitering in Harrington Sound. The shark had come in under the tiny bridge at the Flatts, only outlet from the Sound, and couldn’t find his way out again. There he was, trapped and distraught, frittering away his young sharkhood among a lot of picayune angelfish, yellow grunts and Bailey’s Bay bathing beauties. What irked us, however, was that the shark was described as a “man-eater.” That spurred us into doing some research.

In the course of our delvings we found plenty of references to sharks, but never a record of any human casualty caused by sharks in Bermuda. In fact, in the three and a half centuries of this Colony’s placid history, there has never, it appears, been a shark accident, major or minor. We recall corroborating this with the late Louis Mowbray, brilliant ichthyologist, and father and predecessor of the present curator of the Government Aquarium. We, who have swum with trepidation in the shark-infested harbours of Australia where people are killed or maimed every year by sharks, are sufficiently reassured by Bermuda’s record to regard any itinerant sharks around here with tolerance and indulgence. That is, as long as they don’t go lousing up the fishing.

Actually, there are about 150 known species of shark, of which about ten varieties have been identified in neighboring waters. Commonest type seen here is the puppy or cub shark, a shovel-nosed fellow whose average length is three or four feet, and who reaches a maximum of eight or nine feet. It was an overgrown specimen of this species that the Bailey’s Bay boys called a “man-eater.” Incidentally, it is said that a cub shark can and often does produce as many as thirty living offspring at a single sitting without even blanching.”

The Chinese make gelatin from sharks’ fins and use it in their cooking, and even in Bermuda shark meat is considered by many otherwise normal people to be a platable dish. For our part, its noisome smell when cooking is so overwhelming that we’ve never had either the stomach or the courage to try it.

Dr. William Beebe, who has put his theory to the test innumerable times by descending into shark-infested waters clad only in swim suit and a diving helmet, has said that the shark’s reputation as a man-eater is generally undeserved. Certainly, as far as Bermuda is concerned, neither man nor record can contradict him with local facts. In brief, Bermuda sharks have always shown themselves aloof and restrained as far as man (or woman, for that matter) is concerned. If their jaws have slavered when they’ve sighted a toothless blonde bathing within dinner distance they’ve never let on about it. Like all good Bermudians they seem to appreciate the fact that tourists are our bread and butter, and so confine their diet to groupers and rockfish who won’t complain to the Trade Development Board anyway.