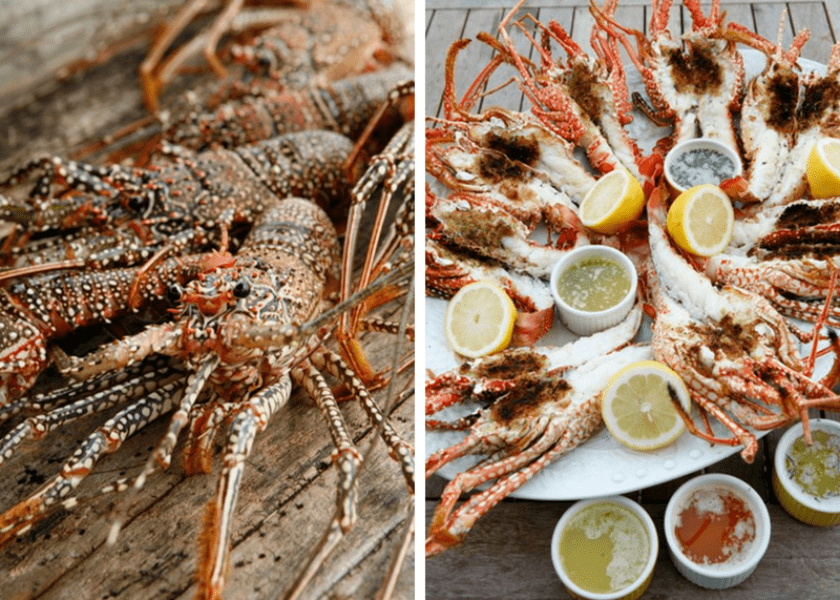 There aren’t many places left in the world where you can go out and dive for your own gourmet dinner. Bermuda’s coral-reef environment and its associated marine life make our island a unique place to live, where anyone with a penchant for swimming and the ability to hold his breath and dive underwater can catch his own lobsters.

Bermuda’s recreational lobster-diver programme was established in 1984, and the number of licences issued has ranged from 450 to approximately 570 in the 2005–2006 diving season. Obtain a recreational sport diver’s licence for $115 and equip yourself with a pole with a wire noose and you may swim into the ocean and catch two spiny lobsters per day from the first of September to the first of April. Licenses expire on the 31st of August. The same annual licence allows divers to catch slipper lobsters and guinea chicks throughout the year (such licence shall not confer a right to take spiny lobsters (Panulirus argus) between April 1st and September 1st).

On any relatively calm day during spiny-lobster season, dozens of boats can be seen dotting the horizon to the north as divers attempt to noose their lobsters. For those without boats, it is also possible to swim offshore to the west and south. It’s wise to check the specific government regulations regarding permitted fishing areas before heading out.

Free diving for lobsters is a physical workout. It entails hours of snorkelling on the surface and diving to the bottom of reef formations to circle the reef looking for suitable caves and ledges where lobsters retreat during the day. Once a lobster has been found, it’s not a given that the lobster will be caught. Holding one’s breath while placing a noose carefully over the tail to yank the animal out is an art form only experience can improve.

The Caribbean spiny lobster is an active, migratory crustacean. For most of the year, spiny lobsters spend daylight hours inside coral-reef crevices, emerging at night to forage over considerable areas before returning in nearly total darkness to the same den or to one of several others nearby. Lobsters are also capable of homing to a specific den if displaced to an unfamiliar area. The ability to maintain consistent headings while migrating underwater and to move reliably even in darkness to specific targets implies that lobsters possess a remarkable sense of orientation and navigation mechanisms.

As any experienced sport lobster diver can tell you, there are favourite caves and ledges that week after week will proffer a steady supply of lobsters. Nevertheless, by the time you have struggled back to your boat with your catch suspended from the wire noose, any tendency to feel sorry for the lobster you’ve just caught quickly dissipates. While the increasing number of sport divers is clear, the total catch by recreational lobster divers is still only a small proportion of the lobsters reaped by commercial fishermen in their traps. Recreational-diver lobster landings have varied from season to season but roughly equate to 10 percent of the commercial catch.

Since the establishment in Bermuda of a permanent commercial fishery for Panulirus argus in 1996, the number of commercial lobster fishermen has ranged from 16 in the first year to a high of about 22, while the total trap allotment for the fishery has varied by 60 traps (270 to 336 traps) over the same period. The government owns all traps and leases them to commercial licence holders on an annual basis. Traps may only be set in two designated inshore areas for a four-month period during the winter (December to March). The central section of the Bermuda reef platform is maintained as a reservoir where no commercial lobster fishing is permitted.

A tagging programme for Panulirus argus, initiated in 1997, is still ongoing. Data analysed thus far shows that lobsters are capable of long-distance travel, although their movement patterns are highly variable. Landings of P. argus have varied during the past six years, from a record in the 1999–2000 season of 36,515 lobsters to a total of 23,756 lobsters caught commercially in 2005–2006. The highest landings figure previously recorded was 35,193 lobsters in 1989 (before the fish-pot ban of 1990).

Spiny lobsters are sold in Bermuda according to size rather than weight. Fishermen at roadside vending stands sell most of the larger lobsters directly to customers. Prices for these lobsters range from $30 to $35. The smaller lobsters are usually sold to local restaurants and hotels for approximately $25.

Although the commercial lobster fishery in Bermuda is a supplementary fishery, it is nevertheless very important to commercial fishermen as it provides an additional source of income during the winter months. During the period from December to March, fish catches are generally lower due to inclement weather. In addition, the quantity of key fishery species such as wahoo and yellowfin tuna is typically low during the winter months. As a result, participation by commercial fishermen in the lobster fisheries forms a significant part of their annual fishing activities. But be sure that when you buy lobsters, you buy them from a licensed commercial fisherman. Recreational sport divers are not permitted to sell or barter lobsters.

Spiny lobsters are sometimes known as rock lobsters. Although they superficially resemble clawed lobsters in terms of overall shape, having a hard carapace and exoskeleton, the two groups are only distantly related. Spiny lobsters can be easily recognized by their very long, thick, spiny antennae and by their complete lack of claws.

The Caribbean spiny lobster, Panulirus argus, grows to about 60 cm in length. The sharp spines that cover its shell and antennae help protect the lobster from predators. These lobsters have a striped body, brown-grey in colour with yellow spots on the segmented tail. If startled, they will kick their large abdominal tails rapidly to swim away backwards to safety.

Panulirus argus inhabits tropical and subtropical waters of the Atlantic Ocean, Caribbean Sea and Gulf of Mexico. This nocturnal species inhabits coral reefs, where it hides during the day in crevices under ledges. Spiny lobsters mate between March and June, when fishing for them is prohibited.

Young juvenile lobsters, about 2.5 cm in length, can grow up to 1.3 cm carapace length per week. This rapid growth rate allows some to reach 7.6 cm in about one and one-half years. In general, although male lobsters grow faster than females, most Caribbean spiny lobsters attain about 9 cm length, or roughly the length required to be legal catch, when they are about three years old.

—Find additional information about the Caribbean spiny lobster at www.marinebio.org.

Bermuda’s northerly coral reef environment is unique, and its marine life is in delicate balance. It is imperative that we safeguard these resources to ensure that they are not overexploited and that they continue to provide benefit and enjoyment to the people of Bermuda for generations to come. To maintain
the beauty and diversity of the underwater world for everyone to enjoy, a number of protected areas have been established where no harvesting is permitted; this allows natural-reef communities to flourish.

The following rules and regulations pertain to recreational lobster divers:

• Any person wishing to participate in recreational diving for lobsters must first obtain an annual licence for that purpose through the Department of Environmental Protection. Spiny lobsters (Panulirus argus) may be taken only during the open season: September 1 to April 1 and it is an offense to be in possession of a spiny lobster, dead or alive, outside of this period. Divers with a license may seek other species of lobster, including slipper lobsters and guinea chicks, throughout the year.

• The minimum legal size of the spiny lobster is 92 mm (3⅝”) carapace length.

• Lobsters must be landed on shore whole; it is not permitted to wring the tails at sea.

• It is an offence to take, injure, sell, purchase or be in possession of any lobster whether alive or dead at any time when the lobster is bearing eggs.

• Only a noose or snare of a type approved by the Director may be used to take lobsters; spearing is prohibited.

• It is not permitted to use an aqualung.

• Licence holders are required to submit monthly statistics on their activities on the forms provided or report their catch through the website www.fisheries.gov.bm.

Lobster diving is not permitted in any harbour, bay, inlet, creek or sound in Bermuda. The area south of the South Channel on the north shore from Commissioner’s Point (Grassy Bay) and St. Catherine’s Point (The Narrows) is off limits south of an imaginary line between Kings Point and Greys Bridge. A map can be obtained from the Ministry of the Environment or by visiting the Marine Resources and Fisheries Enforcement website.

Please contact the Fisheries Wardens at 705-FISH (3474) or fishtips@gov.bm  to report a fisheries offence or a “fish kill” event.