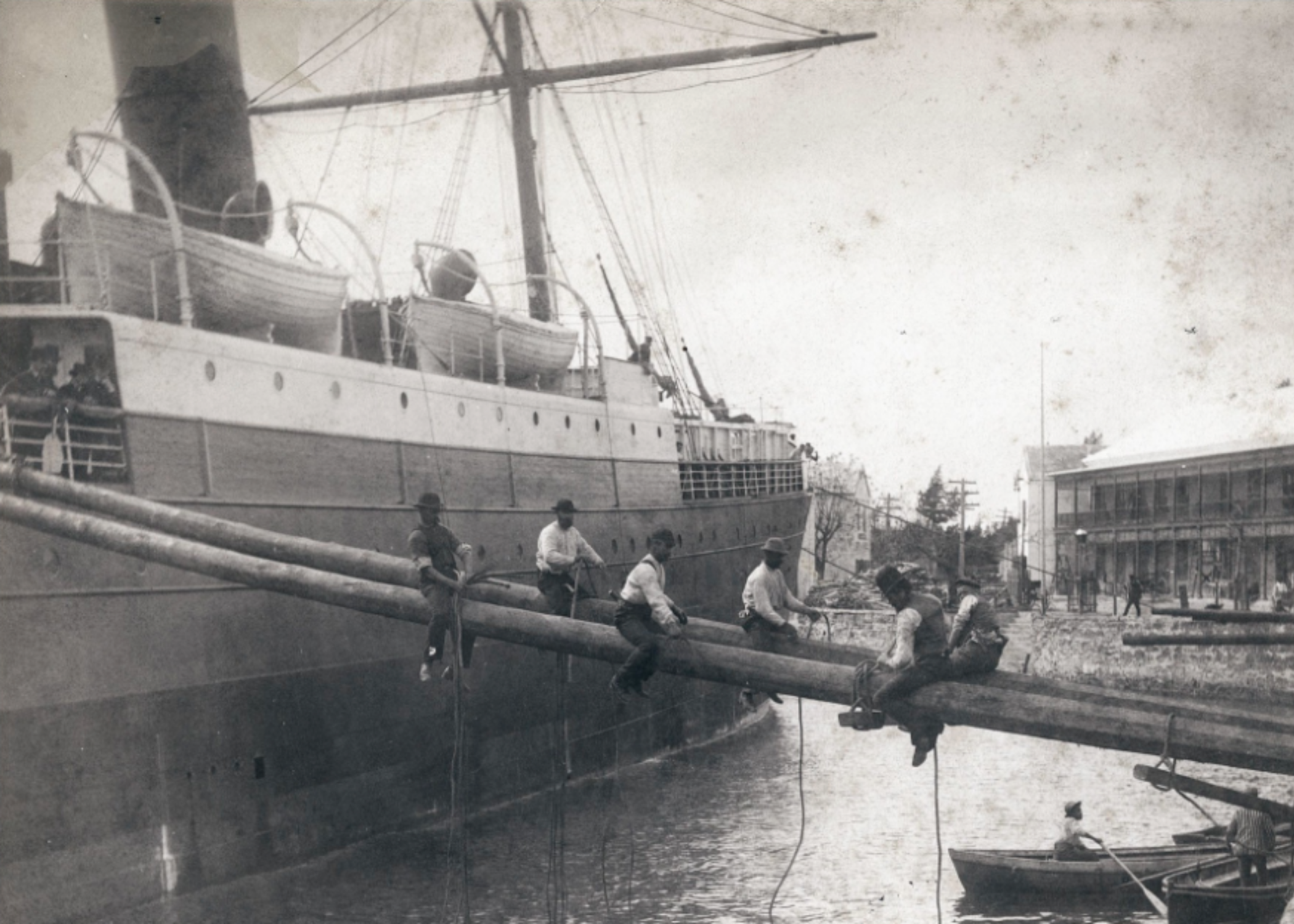 This article was taken from our archives. It first appeared in the February 2005 issue of The Bermudian. The full text appears here in its original form.

It’s perhaps just as well that Nicholas Ethelbert Lusher was a photographer. He left behind an invaluable pictorial record of Bermudians at the turn of the twentieth century, yet relatively little is known about the man himself. He appears to have left no documentation or letters about his pictures and few news clippings or articles. And while he is frequently mentioned in historical Bermuda books, most notably The Bermudian’s own Celebrating the First 100 Years of Photography in Bermuda, published in 1989, he has yet to receive the “coffee table” treatment given to other, perhaps less-gifted photographers.

Without his wonderfully detailed portraits of Bermudians of every class and hue, frozen in time and fashion, we would hardly be aware of his existence or his place in Bermuda history-and even those images were almost lost. Precious and fragile original glass negatives were consigned to dusty attics and boxes and long forgotten, often to be rediscovered as buried treasure years later.

The largest collection, stored in the ceiling space behind the twin gables of the old Crisson Building on Queen Street, was saved and donated by the family to the government archives; these negatives later formed part of A Family Album, an historical exhibition of 140 old Bermudian photographs at the Bermuda Society of Arts in 1979 that also included images by William Weiss and James Heyl.

Others, like those rediscovered by Edmund Marshall amidst boxes of old prints, resurfaced later; Theresa Airey painstakingly restored and included them in her book, Bermuda: The Quiet Years.

So who was Nicholas Ethelbert Lusher-or N.E. Lusher as he is better known-and why are his images so important?

Perhaps because of the paucity of information available about him, any shows of his work have focussed on the subjects, rather than the man himself. Even Lusher’s own descendants, who include local art dealer and collector Nicholas Lusher, seems to know little about the man himself other than his photographic legacy.

But this much appears to be true: N.E. was an “adopted” Bermudian, having been born on Turks Island in 1859, the son of Captain and Mrs. James A. Lusher, and died in Cleveland Heights, Ohio, in September 1932. An obituary in The Royal Gazette that called him “a pioneer in the photographic art in Bermuda” reads: “Unassuming to the last, Mr. Lusher took no active part in local government affairs, though he was always keen and oft-times critical observer. In an unostentatious manner, he performed many charitable works which will long endear him to many.”

The same obituary records that after spending his early childhood on Turks Island, the family moved to Belfast, Maine, and it was while in Maine that the family began to make frequent trips to Bermuda.

Quite how and when N.E. came to be involved in the relatively new medium of photography is not clear. Louis Jacques Mandé Daguerre only published his historic manual on how to permanently reproduce a print on a metal plate 20 years before Lusher was born, and the first known photographs of Bermuda date back to the early 1850s. According to Celebrating the First 100 Years of Photography in Bermuda, Lusher was a contemporary and personal friend of George Eastman, who invented the revolutionary Kodak camera in 1888, but Lusher declined Eastman’s offer of shares in his fledgling company!

By 1880, Lusher had moved permanently to Bermuda and opened his own photographic business, N.E. Lusher & Sun [sic], at 42 Front Street; he also had a studio on Queen Street. The name of the company was not a misspelling by demonstrated Lusher’s sense of humour, acknowledging that solar energy was the natural source of light for his work.

He seems to have been an industrious and prolific fellow, because before long he had established a thriving business, winning all of the government’s photographic business-a fabulously detailed group shot of members of the Colonial Parliament in 1883 is featured in The Quiet Years– and recording a steady stream of portrait work at his studio. The Royal Gazette recorded in 1932: “As recently as the building of the Bermudiana Hotel, when he was about 60, Mr. Lusher agilely scaled scaffolding over a hundred feet high in search of material for his camera.”

Suzanne Notman, writing in Celebrating the First 100 Years of Photography in Bermuda, says: “The portraits of Lusher are remarkable because they included all segments of the community and captured, as no other photographer did, the essence of Bermuda’s people. They have become an important part of the Bermuda’s recorded history.” To look into the faces of confident seafarer Pilot Fox, a stern George Lambert with his mutton-chop whiskers, “Miss. Simmon’s” posing stiffly amidst a swathe of skirts, and young men-the “Crawford Group”-jauntily wearing boater hats, is to glimpse a Bermuda of a bygone age.

Whether Lusher saw himself in this light or was aware of the importance of his historic legacy is debatable. As tourism flourished in the late nineteenth century, Lusher and others, including Heyl, were quick to capitalise on the market by producing albumen prints of Bermuda scenes and hugely popular stereoscopic images.

He was clearly not an “artistic” photographer in the manner of American Arthur Stieglitz, who by 1900 had established the photo-secessionist movement for whom the qualities of light and movement were more important than merely recording an image, or Karl Struss, an early member of the movement, who made several trips to Bermuda between 1910 and 1915 [see The Bermudian, May 2004].

Lusher was, perhaps, the Mall Studio of his day, a commercial photographer more concerned with turning a profit and recording Bermuda and her people for posterity. He was, after all, something of an entrepreneur, owning a cycle livery and a hotel, The Grasmere, in Fairylands where he once apparently contemplated building a golf course.

Tom Butterfield of the Masterworks Foundation, a keen collector of photography who edited the images for Celebrating the First 100 Years of Photography in Bermuda, thinks Lusher has been greatly underrated. “I would put him down as a technician, a true artisan, a man who understood his craft as opposed to someone like Stieglitz, who changed the way we look at the world,” he says. “Lusher does that for us today, because you look at some of his pictures of Portuguese immigrants and mixed marriages, for example-it is incredible stuff.”

“What I like about his work is its simplicity. It’s very direct, not hokey. There’s a formality there. So little is known about him, but he left the greatest body of work of the time. I know Heyl is revered, but I think Lusher’s work is streets ahead of Heyl. Part of it is that you can look at 10,000 portraits and they hold your fascination, whereas a landscape doesn’t after a while.” It will be intriguing to see Lusher’s more formal work juxtaposed with Weatherill’s more intimate studies that almost a century of technological advances helped make possible.

Even so, from a technical point of view, experts are enthralled by the detail Lusher obtained in his work. “All the tones are there,” Butterfield notes. “The photographic medium in the 1880s was still relatively limited in terms of being able to make a photograph that had details in the highlights, shadows and mid-tones. The filtration and red ares were still problematic areas in photography, but he had great photographic knowledge in how to handle the medium. That’s what gives them their richness. That’s the test of someone who had a deep technical knowledge of the medium.”

Remarkably perhaps, Lusher’s studio portraits were all taken in natural daylight. His studio on Queen Street was set up under a north-facing roof, and a glass skylight gave a naturally soft illumination of his prints. A reflector would have lightened shadows.

The fact that any of Lusher’s original glass negatives have survived at all is remarkable in itself, says Butterfield. “Remember, they were heavy, very cumbersome; they break and they deteriorate. The coating was a problem. Each plate was hand coated with emulsion. Every now and then when a glass plate turns up you can’t believe they have survived. They also give the pictures their detail, because the plates were the size of the image-there was no blowing them up. I gave one to [photographer and platinum printer] Mark Emmerson, and he blew up the image and kept blowing it up and you could see the nails on people’s shoes.”

The Crisson collection of Lusher glass negatives was rescued from the Crisson Building before it was torn down; Lusher was a distant relative of the Crissons. Herb Crisson, son of former owner Mrs. E. E. Crisson, told The Bermudian in 1979: “It was quite a project [to retrieve the plates] because they were stored under a high ceiling and we had to get ladders. The pigeons had used some of them, but most were in very good shape.”

The task of restoring them fell to Helen Rowe, the late government archivist, who meticulously cleaned and catalogued them while her father, Clifford Rowe, and her brother Mark made the first prints from them in more than 80 years.

More than a century after they were taken, Lusher’s photographic time capsules continue to fascinate us and not only because of their historical content. Tom Butterfield remarks, “As we get more removed from photography as the medium as we understand it [i.e., traditional film and printing], the greater the appreciation for the true art of the photographer becomes.”