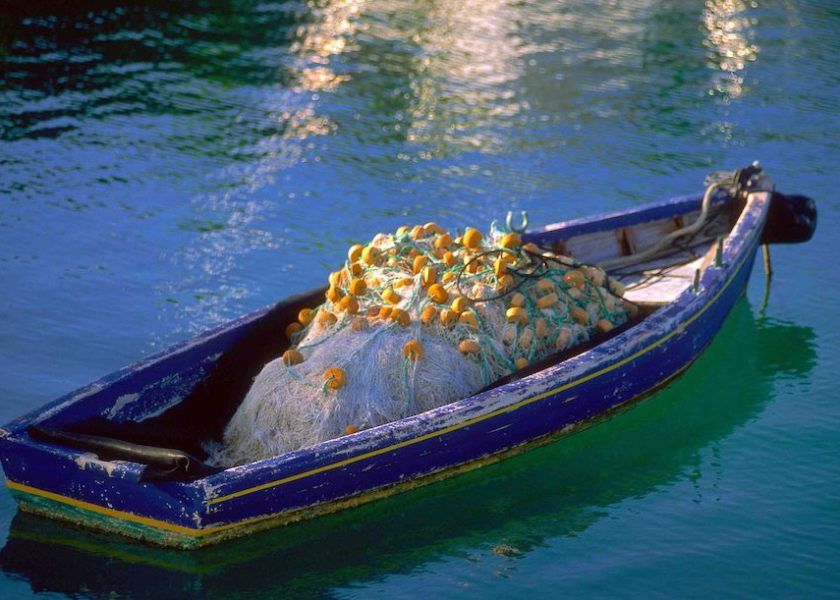 Daybreak finds Red, Sweet Pea and Burp sitting off Frying Pan Island, three men in a boat, happy as mussel pie. I don’t ask them how they have come about their nicknames, but I can bet the stories couldn’t be published in a family magazine. Balanced in a leaking Boston Whaler—a “dinky,” as Burp (a.k.a. Gary Lamb, who displays no obvious inclination toward his moniker) likes to refer to it—the trio are hauling nets off Somerset’s western shore in the hope they may have snagged themselves some mullet.

Mullet season is something of a long-standing tradition among East Enders who hunt the silver-speckled schools of fish (Bermuda’s answer to the rockeye salmon) with fanatical zeal, mainly in pursuit of spawning females with fat and precious roe. Red (Allan Neasham) is just along for the ride, but Lamb and Sweet Pea (Winston Foggo) are St. David’s Islanders of distinction, each with family trees twisting back 300 years. For a half-century, since he first gladly abandoned terra firms at age three with his grandfather Grover and Uncle Gilbert—a community legend in his own right—Lamb has celebrated this annual ritual religiously.“He looks forward to it so much, he never misses a year,” murmurs Neasham of the taciturn Lamb, 53, today a self-made millionaire property developer of some distinction, but a man still so rooted in the blunt honesty of his beloved community that fellow residents have begged him for years to run for Parliament. “He won’t do it,” says Neasham. “Allan, can you see me in a top hat and tails?” counters Lamb. Instead, he prefers to play grassroots lobbyist and political advisor of sorts, something confirmed by a top former U.S. Navy official once invited to Lamb’s Black Horse Tavern to feast on fish sandwiches and discuss the finer points of a controversial landfill project. “Whoever he says gets in (to Parliament) down there, gets in,” confides Neasham. “But to tell you the truth, there isn’t anything he likes doing more than going mulleting. If you took that away from him, you might as well shoot him.” “It’s like a fever,” agrees Lamb. “You just can’t wait ’til November comes.”The mullets’ spawning takes place between mid-October and the first week of November, give or take a day or two depending on the phase of the moon. But when the secret clarion call goes up, St. David’s stalwarts like Lamb and Foggo pack their vessels as if embarking on a clandestine search for the Grail—in this case, not a silver chalice, but a school of coveted fish each up to two feet in length which make a beeline for Bermuda’s shallow bays. To bolster the fishermen’s fortitude are coolers swollen with Zip-locked rice and veggies and a couple of mullet already netted (the better to make a cauldron of chowder en route); cartons of orange juice along with bottles of far more substantial beverages; bread, beer, pockets of Starburst candy, and a Hemingway-esque hoard of fishing gear, nets, lines, and lures, all stowed neatly aboard Lamb’s trusty 26-foot vessel, Sunday’s Ride, for the four-day sleep-out on Mangrove Bay. “It’s a little holiday,” shrugs Lamb, in his baseball cap, stubble and bare feet. “We got enough food to go to America,” chuckles Foggo.

I join them on one morning’s expedition, when the trio appears none the worse for wear after a rough night of Dark ’n’ Stormies at Sandys Boat Club. Apparently, someone had the courageous plan to check the nets at midnight, and everyone ended up in the drink.Angular cranes sweep across the turquoise glass of Mangrove Bay as Lamb and Foggo, who sleep on board with the chowder and iced mullet during these West End sojourns, putter over to the dock to pick us up.

“You had your breakfast?” booms Neasham, a genial, white-thatched giant with ocean crossings, yacht deliveries, Caribbean sails and numbers Newport-to-Bermudas to his impressive mariner’s record. He points me toward a cooler. “You should fix yourself a corned beef sandwich with a nice fat slice of Bermuda onion…”

I politely decline. It’s not yet six o’clock in the morning and my stomach’s already fragile after its bone-jarring moped ride from Hamilton.

By tradition, the men set their 300-yard gill net at nightfall, check it in the morning, then several times after that, shifting it to richer pastures when they feel the mullet are on the move. Sunday’s Ride glides out to the lip of the bay at Tucker’s Point and Lamb drops anchor. There, except for a few knotted patches thanks to last night’s escapade, lies the buoyed net, leaping at the seams with an assortment of captured delicacies.

The pair start hauling in the expanse of net, until it threatens to swamp the tiny dinghy. A small stingray is next along the line, its tail tangled in the netting. “Hang on, baby,” soothes Lamb, his gnarled knuckles patiently working the creature loose, its dark speckles glistening in the soft morning light. After a few minutes, he frees it and it glides like a Stealth bomber down through the dark waters.

Like some magic contraption from a children’s fairytale, the mullet net spills its bounty aboard the rocky dinghy: lobsters, slivery jacks, golden tinged grunts, a couple of bream (which get chucked back overboard), handfuls of rubbery seaweed. Suddenly, the sought-after treasure—a long, gloriously silver-speckled mullet rises from the depths. “She’s a female,” says Lamb expertly, as he pulls it aboard, “but she’s already spawned. He points to her abdomen, where the last remnants of many million tiny, translucent, yellow-gold eggs have poured into the ocean. “See, the roe’s gone.”

Despite the slim pickings, the camaraderie of these yearly mullet outings is really what the participants prize so dearly. “Sitting off”—as they so perfectly describe it—alongside the Sandys Boat Club dock while the rush hour scurries in to fluorescent offices and paper-choked deadlines, the trio tell tales of long-gone friends, shared jokes and simple Bermuda pleasures often lost on the Island’s consumerist maelstrom.

“Look! Look!” urges Neasham, interrupting his mates’ chatter and pointing beyond the dock. A huge school of glittering fry is leaping in the waves of rhythmic unison across the bay. “It’s so pretty,” Neasham almost whispers, “you could write music to it.”

A couple of weeks later, I journey out to the windswept reaches of St. David’s to check on Lamb’s roe. This year’s mullet season garnered him a dozen fish, but only two batches of roe. They’re hanging in his kitchen, like a pair of skinny, withered lungs, dark brown casements containing millions of golden fish eggs. Each year, depending on the catch, Lamb cures the roe, then divides the rich caviar into eagerly-awaited slices. “The old-timers have been calling me for days,” he smiles. “They’ve been asking, ‘Is it ready yet?’ Just you wait ’til you see their faces when I give them this.”

Lamb, who suffers fools, poseurs and braggarts none too kindly but appreciates anyone who “speaks straight,” is beneath his gruff exterior the quintessential Good Samaritan. Armed with a dry wit and big heart, he is the self-appointed protector of his peninsula; young and old, black and white, turn to him with their problems, queries, news. He makes a special point of visiting the elderly, and never without taking along a bag of freshly-caught fish, some home-made hot sauce or a tub of chowder. Once a year, it’s a slice of roe, carefully wrapped in silver foil.

Like his father and grandfather before him, he first salts the fragile roe casements, which have to be taken tenderly out of the fish to prevent tearing. “Taking out the roe is like surgery,” says Lamb, who reckons he’s mastered the art after 50 years. “You have to file your fingernails first, because if your nail cuts the roe, the eggs spill out.” After being salted for 20 minutes to draw out the water, the roe is hung in a dry place and left for a fortnight, gradually turning hard and dark brown or black.

“I’ll cut this into about 40 pieces,” he says, slicing the delicacy. St. David’s people used to keep a long piece of wax paper full of roe in their pocket, and chew a bit at a time,” he says, “like a piece of tobacco. It’s good cut thin on a piece of toast or Johnny Bread, but everybody has a different recipe.”

In the 1950s, Lamb remembers roes would cost £5 a piece. “That was a man’s week’s wages in those days, and I’ll tell you, to get a piece of roe off a St. David’s islander, you’d have to steal it!” Figuring in the time it takes to catch the mullet, plus the boat fuel, he guesses roe, like caviar, would fetch up to $1,000 today if it were for sale.

Lamb left school at age 13 (“everyone did in those days”), joined the pilot boat service and later set up his own construction business which continues today as he and his son Chris resurrect run-down homes with perfect old-style proportion and detail, many of them in blue-chip neighborhoods. But whenever he can, he takes to the sea to fish. Sometimes, his white-collar friends will call on him to free them from the stress of 20th-Century routines. “I’ll get a call from (a well-known local surgeon) and he’ll say, ‘Gary, I got to get out of this goddamn office, man.’ I say, ‘let’s go!’”

Lamb’s passion for mulleting perhaps stems from his hearing for the days of decades ago, when friends’ lives weren’t so frantic, when fishing connected them all to each other and their birthplace. “We’d have six boats go up to Somerset, tie up, fry up some fish or cook some chowder or curried goat,” he recalls, the memory dredging up a smile. “My grandfather would be playing euchre and they’d all be telling their blue-ribbon stories. It was really beautiful.”

Some of those stories were actually true, like the one about Lamb’s Uncle Gilbert, who happened to be fishing seven miles offshore one July day in 1945, when he stumbled upon 18 British sailors. They were floating in a lifeboat after a German submarine torpedoed their ship, the John Ralph. “They’d been at sea in the lifeboat for days,” Lamb recounts. “It was hot, mid-summer, and when he found them, their lips were cracked up with the heat. My uncle gave them corned beef and biscuits and nursed them with tea. The British Navy sold him the lifeboat afterwards for a shilling.”

These tales, passed down through the family for generations, are the life-blood of his community, and Lamb believes fiercely in the need to protect them for posterity. Toward that end, he’s hoping to rally support for a St. David’s Museum at historic Carter House on the former baselands, where traditions like whaling and mulleting can be showcased, and stories of local heroes preserved. “Someone needs to talk to these old guys in St. David’s, before they slip their moorings,” he says quaintly. “Or there’ll be no one to tell them.”

The mullet ritual, with its long laughs, its hard work, and its favourite stories plays a big role in this skein of memory that ties together his neighhourhood and its residents.

“St. David’s people never done much,” declares Lamb, “but mullet fishing was one of the greatest social missions we ever had.”