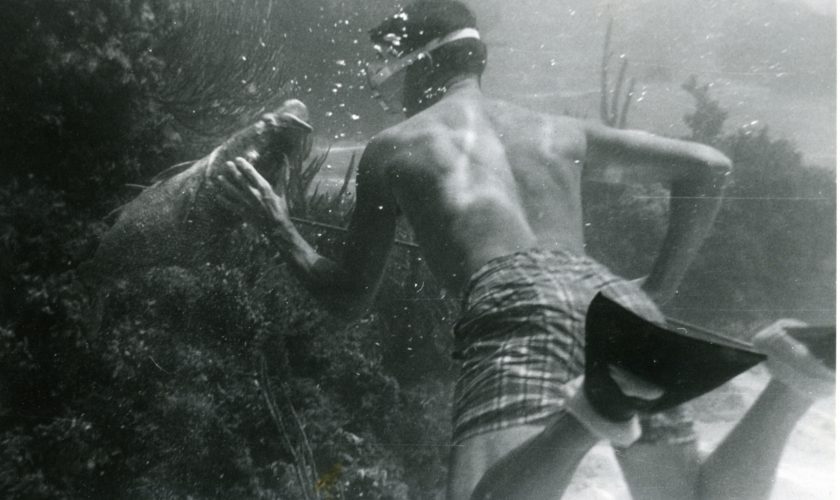 Mystery of a Spanish Wreck

This article is an abridged version of an article originally published in The Bermudian in April 1941, which ran in April 1974.

In the autumn of 1936, when Spain was racked with civil war, the 10,833-ton liner Cristobal Colon left her homeport for the British Isles and loaded fuel in Cardiff. From the Welsh port she cleared for Mexico, and en route was taken over by a special committee acting on orders of the Spanish Government. Later, members of the crew declared that the vessel was bound for Cuba to pick up a cargo, arms and munitions for the Loyalist forces.

At 11:26pm on the fine moonlit night of October 25th, 1936, the Cristobal Colon was steaming at her full speed of 15 knots. One minute later she was hard aground on the reefs off Bermuda about four miles east of North Rock with a huge hole torn in her hull. The wireless operator, it seems, was enjoying a broadcast from Madrid instead of listening for navigation signals. The ship’s master, Crescencia Narvarro Delgado, reputedly mistook St. David’s Lighthouse for the Gibb’s Hill light. He had not been to sea during the five years previous to his taking command of the Cristobal Colon. On board were no passengers, but a curiously large crew of one hundred and sixty, including six stewardesses. No lives were lost in the disaster.

Salvage negotiations were opened, and soon dropped, with a New York firm who wanted $1,800 for each day on the water, plus a $50,000 fee if the vessel were successfully refloated. H.M.S. Dragon, a light cruiser then stationed here, made several futile attempts to haul the ship clear of the reefs, and finally the wreck was abandoned.

Had the Cristobal Colon run ashore here three centuries ago, like many a Spanish ship, there would have been great rejoicing throughout the Colony, for in those times there were few more profitable trades here than, say, “salvaging.” Aware that there were still plenty of enterprising Bermudian who would soon be poking about the wreck on dark nights, an official warning was published promising gaol to anyone caught lifting anything from the stranded vessel. At the time, The Bermudian printed a story about a man out Bailey’s Bay way who pulled off a nice haul of seven eiderdown mattresses on the night the ship was abandoned. When he learned what the law had in store for salvage-snatchers he got cold feet and decided to rid himself of his loot. Rousing his family, he loaded them with the mattresses and led them down to the beach near his home, and then pitched the mattresses into the sea. But wind and sea refused to cooperate and no amount of shoving and coaxing would send the couches away from the beach. Recruiting his family, the damning evidence was hauled back to the house and hidden till nightfall. That night the same procedure was followed with no more success. Not until the fourth night did he see the last of the now-hated mattresses, and for weeks afterwards a member of his family was delegated to go down to the beach each day, just in case.

One looter was caught red-handed with a fine radio set, which he stole from the wreck. In court he insisted the set had not been taken from the Cristobal Colon. “What would I do with a Spanish radio?” he protested plaintively to the magistrate. “I can’t understand Spanish.”

To a casual observer the Cristobal Colon appeared to be a perfectly sound ship under way, and nothing was done to alter this dangerously deceptive appearance until after another vessel, the Aristo of the Ocean Dominion Line, followed her on the reefs some months later after apparently deciding that he Spanish vessel was in the channel. Lured to her own doom, the Aristo was fast aground for four hours on Curfew Boiler not far from the Cristobal Colon. She was refloated and taken in tow by tugboats. Then suddenly the captain gave the order to abandon ship, and with towline still fast, the Aristo plunged bows first to the bottom, a half-mile from Northeast Breaker Buoy. A Marine Court of Enquiry then recommended that the funnel and at least one mast of the Cristobal Colon be removed to avoid a repetition of such a disaster.

All salvaged cargo and furnishings from the Cristobal Colon were stored in the King’s Warehouse at St. George’s pending the result of claims made by the Spanish Government and the Compania Transatlantica, original owners of the vessel.

The crew remained in the Colony about three months, being cared for by the Sailor’s Home. They were son familiar figures into eh streets of the Old Town, dressed in berets, grey flannel slacks and blue shirts. A souvenir of their sojourn here is a road leading from Gates Fort some distance along the North Shore, which was built by the distressed seamen and paid for by the British Government. They were carried back to Europe in a British ship. Their story has a grim ending, for later it was reported here that on their return to Spain they were seized by victorious rebels and shot out of hand, men and women too.

In spite of a Customs notice posted up on the sides of the Cristobal warning that trespassers would be prosecuted, the wreck received plenty of nocturnal visitors, and now and then various groups of marauders would meet on the decks to their mutual embarrassment. The ship had been a finely equipped liner, with attractively paneled alleyways and a good deal of carved mahogany. The chapel was floored with variegated tiles, many of which have been removed in the course of the passed four years by American tourists and token hunters.

Not until the victory of General Franco and the insurgent armies as the case of the Cristobal Colon settled in the courts, and by the tie the salvaged goods and furnishings of the vessel were auctioned off last month storage fees due the Corporation of St. George’s had mounted to more than £1,300 which was paid out of the proceeds from the sale.

On March 12 a long-awaited event took place in the Corporation shed in St. George’s. From all over the Colony bargain and souvenir hunters swarmed eastward. For at last the salvaged goods and furnishings on the Cristobal Colon, wrecked her more than four years ago, were to be sold at public auction.

Of the thousands of items sold, chief interest was shown in table silver and cutler. After spirited bidding on individual pieces, the great bulk of this was sold to Ernest Lindley for £101.

The ship’s steering wheels were bought by two men who once followed the sea and retained a sentimental attachment for anything pertaining to it, Robert Aitken of Devonshire and Hugh Gray of Sandys. At the time neither seemed to know what they would do with the big wheels but they cheerfully paid £6. 10s. and £5 15s. for them. The original charter and certificate of appraisal of the Cristobal Colon went to Louis L. Mowbray of the Government Aquarium. A handsome piece of maroon tapestry and the finely carved coat-of-arms of the vessel were bid in by Lloyd Jones of Paget. Furniture dealers bid briskly against private buyers for a batch of mahogany chairs with reversible seats, most of which were acquired by William Frith of Hamilton at 3. 5s. apiece. One of the ship’s bells went to Arthur Woodman of the White Horse Inn at St. George’s and the other to Lloyd Jones. Three coffins, two white and one black, were sold for the very low figure of 7/- each, which might indicate a remarkable lack of foresight or excessive squeamishness on the part of the crowd. An organ which emitt
ed weird noises when its keys were struck fetched only £3. Seven paintings by Jose Arrue depicting scenes of life in Spain were knocked down for 25/- each. Dr Parker of St. George’s acquired some leather-upholstered chairs studded with brass nails, and Bernard Wilkinson of Bailey’s Bay paid 33/- each for fifty-two oak chairs.

There was a sudden stir of excitement in the crowd when a man in anguished voice howled that he had been robbed of a bundle of currency notes. Frantically, he ransacked his pockets over and over again, and a police sergeant and a constable were called in. As the latter took out his notebook, the sergeant told the man to have another look through his pockets. He did so and sheepishly produced the money intact. The crowd cheered.

Wines and spirits salvaged from the wreck were also sold at remarkably low prices. Forty-six mirrors were sold off in short order, and a bass drum fetched only 30/-. A piano was bought by Herbert Davis of Sandys for £16.10. The auctioneer had no difficulty disposing of such items as attractively fashioned electric light fixtures, bunk ladders, pots-de-chambre and suchlike to souvenir hunters.

The sale went on for five days, on the last of which were sold binnacle lights, coils of rope, boat covers, crockery and ship’s linen. The ship’s motor launch fetched £57, and lifeboats went for £3 apiece. The auction closed when F.C. Outerbridge of St. George’s bid £85 for all remaining material, a miscellany of hundreds of various items. So ended the story of the Cristobal Colon, but always there will remain a certain amount of mystery attached to the vessel, never now to be cleared up.