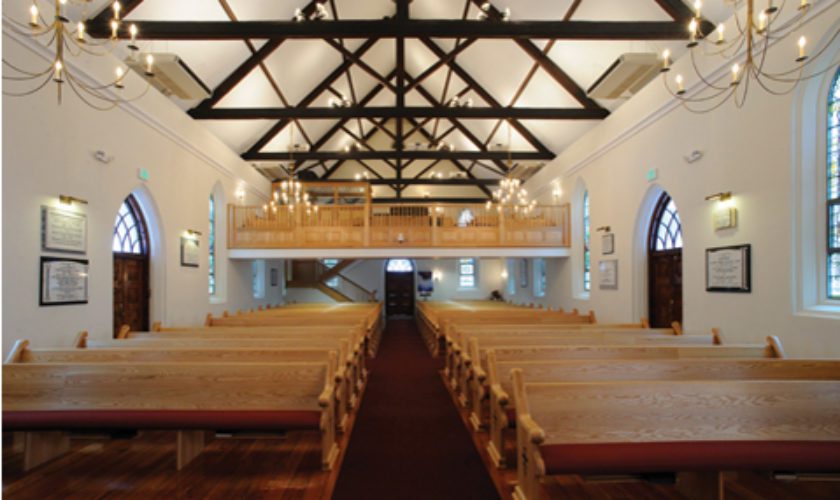 New Beginnings for a Venerable Church

Historic St. Paul looks to the future after a major renovation.

When Rev. Dr. Lanel D. Guyton arrived in Bermuda from the U.S. to become pastor of St. Paul African Methodist Episcopal (AME) Church, he realised from his very first Sunday that he was stepping into an institution with a proud legacy.

St. Paul, located on the corner of Court and Victoria Streets, Hamilton, is the cathedral of Bermuda’s AME church. It dates back to 1872, the year the cornerstone was laid. Its first service was held on New Year’s Sunday, 1873. St. Paul was instrumental in the establishment in 1892 of the island’s first black high school, the Bermuda Collegiate Institute, which remained in existence for a decade.

Its illustrious membership has included trailblazers like Hamilton businessman and parliamentarian Hilton Hill, physician Dr. Leon Williams, educator Dame Marjorie Bean, the distinguished judge Dr. Earle Seaton and his sister Ruth Seaton James, who was the first black person to run a government department in Bermuda. Its long list of outstanding pastors, the majority of them American like Guyton, includes Rev. Vernon Byrd, whose contribution during the turbulent 1960s was deemed so significant he was awarded an MBE, an honour usually granted to British subjects.

By 2005, however, the year Guyton moved to the island, the sanctuary was in desperate need of revival. Church trustee Edward Dyer says, “The pews were falling apart. The termites were having a ball with them.” There were a host of other problems, including a balcony that was so unstable some members refused to mount its stairs. “The place just needed to be refurbished,” Dyer says.

Church trustees had long been aware of the need to renovate, but other projects took precedence. The push came from Guyton, a Californian with a can-do attitude who found inspiration in both the church’s legacy and the construction boom that was very much in evidence in Hamilton six years ago.

It was a sign, he says, that God had sent him to Bermuda for a purpose. “Building cranes permeated the skyline,” he says. “That represented revival. I saw St. Paul as a great church, with an incredible history and an incredible congregation.”

Construction did not get under way until 2009, but the preparation was lengthy and laborious, with the 15-member board of trustees overseeing the selection of an architect and a contractor as well as getting the requisite approval from the Department of Planning.

The project took on biblical significance from the start, because from 2006 services moved to the church-owned Centennial Hall next door. St. Paul would be out of commission for five years. The initial move had occurred because Guyton found Bermuda’s heat and humidity oppressive, and Centennial Hall, unlike the church, had air conditioning. No matter the cause, the congregation readily identified with the story of the ancient Israelites wandering through the wilderness for years as they awaited their own promised land of a new sanctuary.

Renovations saw the original flooring retained, but the termite-ridden pews and the sagging balcony were ripped out and replaced. The original roof beams, now reinforced with steel, are exposed, giving the sanctuary a cathedral-like feeling, says Guyton.

Other improvements include features that comply with modern-day planning requirements and twenty-first-century desires: air conditioning, smoke detectors, wheelchair accessibility and theatre-style lighting in the ceiling. The stained-glass windows were removed, cleaned and fitted with new frames.

St. Paul now boasts performance-quality audiovisual equipment, which includes a sound-editing booth in the back of the balcony and, near the front of the sanctuary, two television screens for the pastor and choir and a retractable screen for the congregation. These digital-age features allow transmission of notices, scripture readings and live camera shots while the service is in progress. The church is also investigating the possibility of having services streamed live over the Internet.

A decision midway into the project to install a new organ has transformed the look of the altar area. The Casavant pipe organ, for which prominent Reid Street East businessman James “Dick” Richards contributed the crucial £600 down payment, was acquired in 1938. It was dedicated, along with the new bell, at a service that made the front page of the Bermuda Recorder in July 23 of that year. The organ remained in use until 13 years ago, when it was dismantled and the pipes were placed in storage overseas. Since then, organist and senior choir director Cecil Smith has made do with a digital organ.

Installation of the new Rodgers organ, which is both digital and pipe, was a painstaking process overseen by organist Adrian Ridgeway, with assistance from overseas technicians. Its 1,200 pipes, a quarter of them retained from the old organ, were installed behind the altar where they frame the original stained-glass window. It was a tight but perfect fit and has opened up and enhanced the whole area.

The new organ and sound-and-lighting system has given the church a new source of revenue: concert performances. Ridgeway is the organist at St. Paul’s Anglican Church in Paget. With five and a half thousand pipes, the organ he plays is in a class of its own. But Ridgeway describes the St. Paul AME organ as “a great instrument that combines the best of both technologies, digital and pipe. This is probably one of the most versatile in Bermuda. The old organ was not capable of concert performances. This one is.”

Guyton’s favourite new feature is the centre aisle, which will find more favour with brides than the former two-aisle layout. There were external upgrades as well; changes in aesthetics, landscaping and wheelchair-accessibility are the most visible. Another improvement has seen Centennial Hall connected to the sanctuary. The church bell, which had long been out of service, now rings every Sunday. A day-care centre leases the renovated basement.

The $4 million renovations were overseen by architectural firm Entasis and carried out by DeCosta Construction. Dyer, a retired prison commissioner and talented carpenter, was chair of the 10-member renovations committee. Other members included Ianthia Welch, Thelma Trott, Stephen Clarke and Edwena Smith. Guyton praises the committee members, saying they had brought a range of skills and talents to the process.

Construction lasted through much of this year, and prior to the start of the first service in the renovated church on Sunday, September 4, AME Presiding Elder Rev. Betty Furbert marked the milestone with a tree-planting ceremony.

Churches are notorious for controversy and conflict, but by all accounts, there was little dissension during the renovation process. Dyer admits to being “old school” as far as the digital equipment is concerned, but he is pleased with the renovations overall. “I haven’t come across anyone who has had a bad opinion, but I believe for a sanctuary the audiovisual equipment is overdone.”

Guyton says that by blending the contemporary with the traditional, the church is catering to both older and younger members as well as building a bridge to the future. He says the “real miracle” was that construction was completed before the recession hit.

St. Paul is looking forward to its annual Christmas concert, which will be the first in the church in five years. It will take place on Sunday evening, December 18, under the direction of Cecil Smith. With a new organ that is producing a “wonderful sound,” Smith is eagerly anticipating the event.  Adds Guyton: “I’m expecting a large turnout.”

St. Paul is the island’s largest
and most influential African Methodist Church. The denomination has played a significant role in religious and social life in Bermuda. St. Paul was founded nearly 40 years after the abolition of slavery, and its message of salvation and social advancement had strong appeal for black Bermudians during the years of segregation.

Edwena Smith, a retired Berkeley Institute Latin teacher and librarian, is a life-long member of the church, trustee and member of the renovation committee. She says, “We grew up in a segregated community. If you were a member of St. Paul you were valued, you had the freedom to express yourself.”

St. Paul contributed to the spiritual lives of its members, but it offered a strong cultural and educational component as well, staging plays and musical programmes with “world-class anthems.”

A former slave, Richard Allen, formally established the AME denomination in Philadelphia in 1816. It traces its beginnings in Bermuda to 1869, with a visit from Rev. R. R. Morris, an official of the British Methodist Church in Nova Scotia. The following year, Bishop Willis Nazrey, who was based in Nova Scotia but born in the U.S., arrived in Bermuda and electrified audiences with his sermons and inspirational reports about the accomplishments of black people in the U.S. He returned in 1871, bringing with him Rev. Morris, the first pastor of St. Paul.

The congregation held its first meetings at Oddfellows Hall on Court Street before purchasing property on the corner of Court and Victoria Streets in December 1871. Church trustees were an influential group that included Samuel David Robinson, a future founder of The Berkeley Institute. The cornerstone was laid in 1872, and members held their first service in their new building on New Year’s Sunday, 1873.

The church’s first years were difficult. Government queried the minister’s right to conduct marriages because he could not produce credentials showing that he was a member of a “sect or society of Christians” established in the United Kingdom, according to an article in The Royal Gazette that ran on March 6, 1949.

The building itself was a work in progress, according to church records. The congregation had to make do with a “rickety old table” and “inferior” borrowed articles until the Ladies Aid Society came through with funds for an “elegant set of Communion Service.” Members of the congregation worshipped on “rough boards, sometimes giving way under the weight of their occupants” until they could afford to replace them with proper pews.

According to The Royal Gazette, worshipping in a poorly equipped building was stressful, and the difficulty of raising funds to pay for improvement took its toll. There was dissension and some members left.

The situation gradually improved, however. In 1885, St. Paul became affiliated with the AME church, headquartered in Philadelphia, after a merger of the BME and the AME denominations. According to the Gazette, “It was visited on that occasion by Bishop Disney, who was largely responsible for effecting the merger.” The newspaper reported that the vestry was added between 1888 and 1892 at a cost of £275, and the spire was erected between 1898 and 1902. Membership increased, and a “curiously” high gallery was installed in the mid-1930s to accommodate increased attendance.

The Gazette reported that “The church has always been noted for the strength of its guilds and societies and for the fine work they have put for their church. In 1924, for example, the ‘Captains and Executive Staff’ raised £844 in two months to clear off the debt on its parsonage. A notable effort.”

Church records also pay tribute to their outstanding pastors. Smith remembers Rev. E. N. Thornley, in particular. She says he inspired three Bermudians to train for the ministry. One of the three, Donald Ming, became a bishop. “He made a tremendous impression on young people,” she says.

Rev. Thomas Foster, described in church records as a “progressive” pastor, served at Southampton’s Vernon Temple during the 1950s and at St. Paul during the 1960s. His marriage to a Bermudian teacher, the former Helen Somersall, ensured he would have a lasting connection with Bermuda.

For long-time trustee Edwena Smith, the new organ is the high point of the renovations, but she is delighted with the result overall. “To me it’s like going into a brand-new church,” she says.