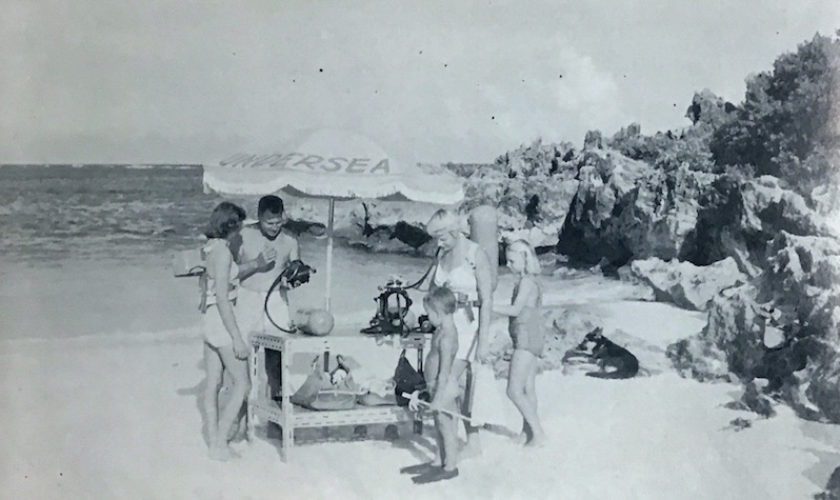 This article was written by Park Breck and first appeared in the April 1960 issue of The Bermudian. It has been reproduced for the web with original spelling and photographs.

It was one of those soft, summery Bermuda afternoons that advertising men write about in winter. The young couple who came down to Gibbet Beach, where we run a skin-diving school, could have just stepped out of a four-colour ad. He was Apollo, she Diana.

Jeanne and I found them apt students. They learned the necessary techniques within fifteen minutes, and then we were off on an underwater swim to the nearby marine gardens. I led the way and my wife rowed the dinghy, following our air bubbles closely.

The couple seemed to be having fun. Diana swam like a swallow, or at least did until she saw a school of silvery one-inch fry. Usually it is difficult to hear a voice under-water more than a few feet, but her screem could be heard a good twenty-five feet away.

As the tiny fish darted underneath her, Dina drew up her feet and paddled frantically with both hands. I held her gently while Jeanne manoeuvered the boat close by. “What’s the matter?” I said. “Those fish!” she cried. “I hate fish. Get me out of here!”

The reactions of neophytes to the undersea are a source of constant amusement and discussion among instructors, and we enjoy a daily guessing game at the beach. The instructors try to size up students before they get into the water. More often than not, they are wrong. The All-American college man quivers like a jellyfish, and the meek little girl from the Mid-West takes off like a bird.

One pair of turtle-doves proved uncontrollable underwater. Up, down and around they went, despite my urgent signals to direct them. Every action indicated they were on the verge of panic. Overhead, the little rowboat hovered close by to deal with a sudden emergency.

Finally, still fearing the worst, I got the couple in hand and led the way back to the beach, anticipating trouble any second. But we arrived quite safely, and the honeymooners sank to the sand.

“Oh, dear,” she said. “What a wonderful day! First, champagne for breakfast, and, now, skin diving.”

It seems they had participated in the Elbow Beach Surf Club’s weekly honeymoon breakfast, at which champagne cocktails were served along with the coffee.

That story brings to mind the character who arrived at eleven a.m. dressed in bathing trunks and exhaling the aroma usually associated with distilleries. His eyes were glassy, and he swayed like a casuarina tree in a gentle breeze.
“You can’t take him down,” my wife said. “Quiet!” I commanded in my best military manner. “We need the money.”

Our friend spent the next 45 minutes on his tummy in one spot, exactly four feet down. Relieved of his diving gear, he slurred, “Terrific,” and lurched off to the nearest pub.

The people who worry us most are not the frightened, the brave, the eager, or the timid. They are the thoughtless ones who wander off on their own, disobeying strict orders to stay within sight of the instructor.

It was September, and both Jeanne and I were feeling the effects of a long, hot summer. She was rowing the boat, and I was guiding four students on their first dive. The water was choppy, and Jeanne was having a hard time following our bubbles.

We stopped at the usual “take a breather” spot, counted noses and missed one diver.

“You row ahead around the island,” I yelled to Jeanne. “I’ll stay here in case he went the other way.”

No sooner had she disappeared around the bend than the man turned up. Rowing wasn’t easy against the wind and chop, but Jeanne didn’t return until she realized it was hopeless to look further. Then she saw the student listening to my Dutch-uncle routine.

“You’re either the bravest man I know, or the biggest damn fool,” Jeanne began, digging at the water with the oars. The rest of the speech must be deleted from this or any other account. I can tell you I was proud of Jeanne that day. Her language would have made Shakespeare blush.

When we swam back to the beach, the crestfallen student was very quiet, my wife apologized for her invective.

“Not at all,” said he. “I was having the time of my life, and I just didn’t think. But you were very nice about it.”

That made me think this chap must have served under the Marine’s oldest platoon sergeant, but it turned out he was dean of admissions at an Ivy League institution. The incident was recorded as “the day Jeanne bawled out the dean.

On a more recent day, the last I saw of a student was a pair of extra large green flippers flapping in the blue haze. I remained with the rest of the class while the rowboat trailed him faithfully until he surfaced.

“Hey, this thing is out of air,” he complained.

It takes all kinds, but I’ll boil up and bolt down my flippers if I ever meet another one like the doctor form St. Louis. He phoned four times and begged us to take him to North Rock without the usually preliminary check-out. I gave in finally.

When we had arrived, and the party was gearing up, I heard these words between Jeanne and the doctor, who had insisted on using an outmoded and complicated type of equipment:

Jeanne: “Do you know how to use the air-economizer valve?”

Jeanne: “Do you know how to clear from your face mask?”

Jeanne: “ Do you know where the air reserve valve is?”

“Okay, felows, let’s go,” I hollered. Overboard we splashed like coins into a wishing well.

Standing on the reef at twelve feet, I waited while Jeanne assured the doctor three times that it was time for his departure. He jumped, right in front of me, and did the loveliest panic you’ve ever watched. It was a classic. He swam a frog kick, which is useless with flippers, blew off great clouds of bubbles, and exhibited every known sign of distress.

I laughed so hard the mouthpiece flooded, took off the doctor’s weight, and hauled him to the boat ladder. Figuring that he might not have learned his lesson well enough, I said: “Here, hold still while I put on your weights.”

There were tears in his eyes as he begged me not to sink him again. “I’m scared,” he whined.

There is some question as to who profited the best from the experience, the doctor of Jeanne and me. Anyhow, since then we have never taken anyone offshore without a shallow-water check-out first.

A diving instructor doesn’t mind if a student admits he is scared, because the admission intimates that he’s willing to try it anyway. You can handle a person like that. It’s those who are afraid to admit fear who worry us.

Running a diving school gives one a course in applied psychology, only more practical. Early in the game you learn to profit by mistakes and never make the same one twice.

Once we took a group of fledgling divers to a spot where we hadn’t been before. Our son, Peter, aged nine and a half, was in the group. Before we knew it, Peter beetled straight to the bottom, sixty feet down! After that, all diving is done at familiar locations.

As an instructor, my wife has one great advantage: she’s a woman. Men don’t want her to show them up, and women see her as a challenge.

Clare Booth Luce was progressing slowly through a series of lessons until Jeanne dove with her. “I wasn’t going to let her do something I couldn’t do,” Mrs. Luce declared. “Jeanne gave me the confidence I needed.”

We used to tell friends, “Panic is routine in the diving game,” but this is no longer true. New teaching techniques and improved diving gear have reduced it to a minimum. Unhappy students are even allowed out over their heads.

A patient and compassionate instructor can make skin diving a thrilling experience for any confident swimmer, and you know you’ve done a good day’s work when a student says, “That was the greatest! It was the highlight of my vacation.”

The most cherished compliment came from Richard Joseph, Esquire magazine’s travel editor, a student three years ago. Several years later I telephoned him at his office to say hello.

“What are you talking about?” I said.

“Last summer I went down in the Mediterranean with some of those French instructors,” he said. “They took me down about fifty feet, and all of a sudden I started to panic. Then I remembered some of the things you taught me, and I got out of it. If it hadn’t been for you, I would have drowned.”