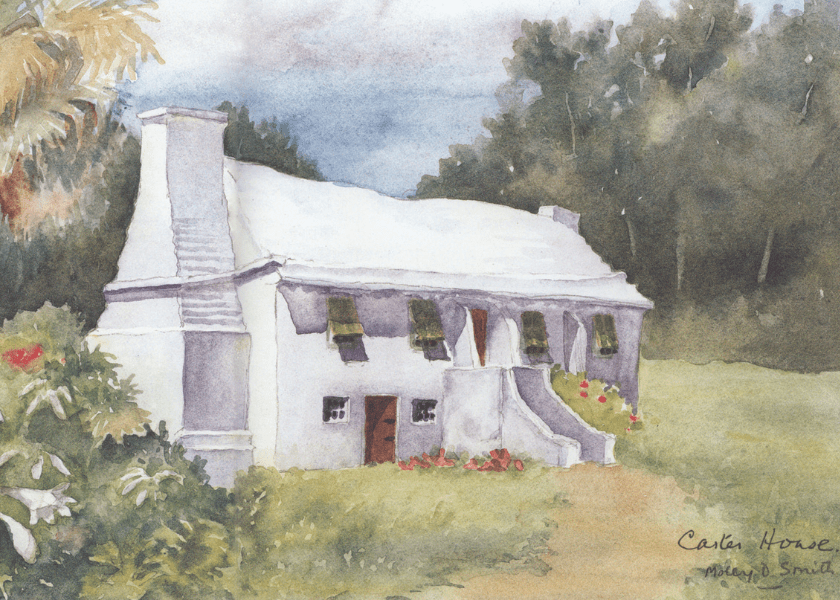 Originally called Southside House, Carter House is believed to be one of the oldest vernacular farmhouses not only in St David’s but also in all of Bermuda. It has survived largely in its original structure and form for over three centuries. The House is now a museum preserving the one-of-a-kind culture and history of the St David’s Islanders.

After the Sea Venture’s colonists wrecked on Bermuda’s shores in 1609, they quickly built another boat to continue on to Virginia, to support the colony there. However, three men were asked to stay behind to continue the British legacy in Bermuda. Christopher Carter was one of those men, and his descendants built Carter House in 1640. The old home is mostly in its original condition, having withstood countless hurricanes since it was built.

Carter lived in Bermuda until 1624 when he and his wife were killed by an explosion of the gunpowder store on board the Sea Flower in Castle Harbour. The ship sank and the wreck has never been found. Interestingly, Carter House directly overlooks the site as if a memorial.

Martha Hayward, a great granddaughter of Carter, lived for many years in the house at the start of the 18th century until she died in 1791 at the ripe old age of 114 years. During the U.S. Military operation between 1941 and 1955, the American forces used the building as a beauty parlour before it became the St David’s Historical Society Museum in the late 1990s.

To visit Carter House today is to step back in time and experience an uncanny nostalgia, perhaps a stirring of ancestral memories embedded deep in the genes, provoked by the elegant beauty of handcrafted tools, deep stone fireplaces and cedar beams. The museum offers pictures and artifacts that capture the character of St. David’s and its independent, maritime people. Outside, a myriad of native and endemic flowers bloom in neatly tended gardens around the house, illustrating history with their colors and scents.

Most 17th-century houses in Bermuda were made of wood, but Carter House was built of Bermuda stone. It has two floors, the upper being reached by an outside staircase in the middle of the frontage. Each of the gable ends are supported by large chimneys. The house was built on a hillside to protect it against the winds.

Retired lawyer and former MP Rick Spurling founded the St. David’s Island Historical Society in 1998 at Carter House after well-known local historian Joyce Hall approached him for help in restoring the venerable property. He negotiated a lease with the BLDC, raised the $150,000 needed for restoration and repairs and reopened Carter House as an exhibit of St. David’s soul.