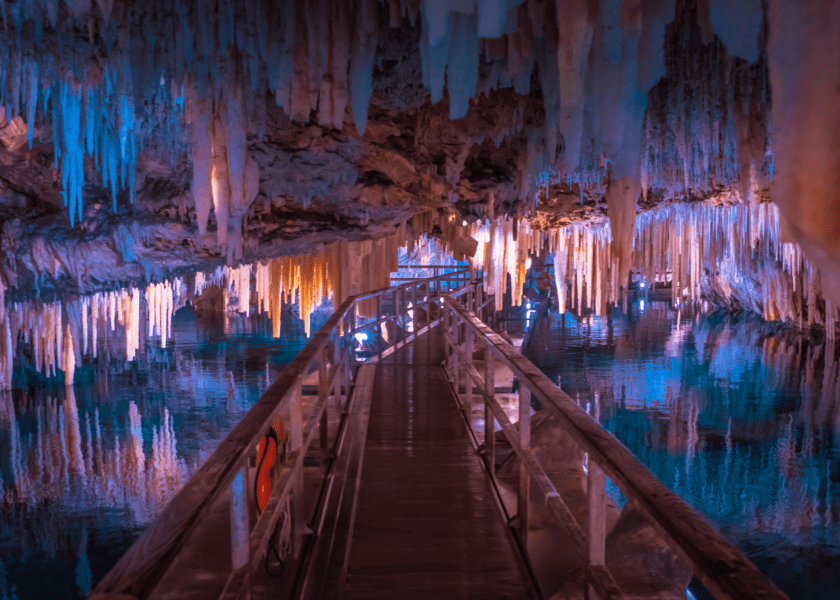 Early in 1907, Carl Gibbon and Edgar Hollis were playing cricket in the vicinity of Bailey’s Bay, when suddenly their plaything vanished. In search for the ball one of the boys discovered a deep hole in the earth which he plumbed with a long stick. It was apparently bottomless, and he and his friend began dragging away the stones that walled the sides of the hole.

Some of the stones were too big for their strength and had evidently been placed there by human hands to prevent cattle and dogs from stumbling into the crevice. Frustrated by the bigger rocks, the boys fetched their parents to the scene, and a party attacked the widening hole with crowbars and hammers, finally excavating a hole about two feet by four, or sufficiently large to allow a small man to squeeze himself through.

After some time, the owner of the property, Mr. Julian I. Wilkinson, noticed a small boy playing with a white conical object. Mr. Wilkinson recognized the object as a stalactite and had the boy lead him to the mouth of the cave where he had found it. Mr. Wilkinson lowered his son, Bernard, into the hole where he descended 140 feet with nothing to light his way but a bicycle lamp. He found an underground world of delicate splendor with magnificent crystal formations of every size and shape surrounding a clear lake 55 feet deep.

Upon hearing about this spectacular underground display, Mr. Wilkinson next sent both his sons into the tunnel to report back with everything they could see. Their subsequent excitement and wonder for the cave prompted their father to cut a hole big enough for the construction of a staircase that descended 150 steps. Now it would be possible for everyone to safely see the beautiful cavern. Electricity had not yet come to Bermuda, so an acetylene gas plant lighted the way for many years. Today, a state-of-the-art lighting system allows visitors to focus on the intricacies and impressive details of the formations.

Another discovery was made shortly after the caves opened to the public: a perfect fossil of the Cahow bird. It was discovered in the recesses of the Crystal Cave and held particular interest for naturalists since that species has been extinct for more than two and half centuries.

Celebrated author Mark Twain visited the caves on one of his sojourns on the island and described the experience like this: “We descended 150 steps and stood in a splendid place 250 feet long and 30 or 40 wide, with a brilliant lake of clear water under our feet and all the roof overhead splendid with shining stalactites, thousands and thousands of them as white as sugar, and thousands and thousands brown and pink and other tints. All lighted with acetylene jets.”

Other famous visitors include The Prince of Wales, who was deeply impressed with its beauty, and Annette Kellerman, an actress who starred in Neptune’s Daughter. In that film, the Crystal Cave was chosen for the witch scene.

And according to gotobermuda.com, the 1980s children’s series, Fraggle Rock was inspired by Crystal Caves and the story of its discovery. Bermudian artist Michael Frith, Fraggle Rock’s co-creator with Jim Henson, imagined the underground world filled with strange and wonderful creatures.

Over the last century the experience has been improved to upgrade accessibility and comfort for visitors, making it one of Bermuda’s most popular attractions. The caves include both Crystal Cave and Fantasy Cave, both unique experiences. Descending into Crystal Cave, explorers cross floating pontoons over a clear underground lake, in which spectacular formations appear to be only inches from the water surface but are in fact over 50 feet below. Pristine white stalactites covered with crystallised soda straws sprout from the roof of the cave overheard. Fantasy Cave is different with walls covered in calcite mineral deposits that resemble frozen waterfalls. Clear, deep pools reveal the beginnings of passageways that connect the caves with the ocean.

After descending into the caves and ascending back above ground, visitors can enjoy the modern convenience of Café Ole – a casual walk-up restaurant in a garden setting on property – and the nearby Bailey’s Ice Cream at the end of a dedicated walking path. The famous Swizzle Inn is also close by.