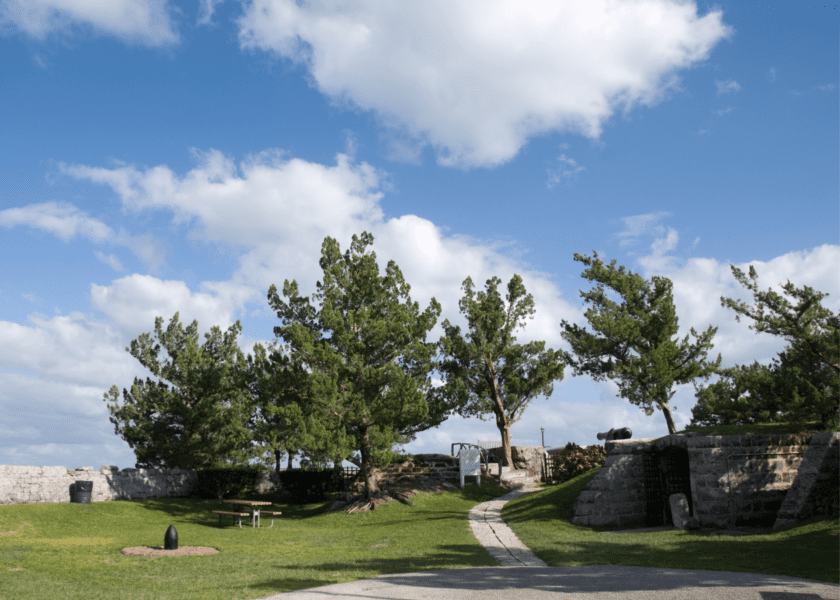 Located in the western parish of Sandys, Scaur Hill Fort and Park offer breathtaking views and lovely areas for exploring or picnicking. It’s an ideal place to visit on your way to or from Dockyard.

Forts still have their uses – for walks and picnics rather than for shooting canons or guns these days. Because they were built to protect the island from enemies, they sit atop hills and therefore have amazing panoramic views. Fort Scaur is no exception.

The fort is a popular attraction because of its panoramic views of Ely’s Harbour and the Great Sound. And with the help of a mounted telescope, Fort St. Catherine and St. David’s Lighthouse are also visible from here. Besides taking in the views, visitors can explore the ramparts, subterranean passages and dry moat. The parkland surrounding the fort includes old, whitewashed water catchment, an overgrown quarry, and a field and hillsides dotted with cedars, palmettos and Bermuda olivewood trees, all rewarding birdwatching spots for warblers and migrants, particularly in the fall.

The fort was built in the late 1860s to defend the Royal Naval Dockyard against a possible attack. Tensions were high after the American Civil War and it was feared the triumphant Union would exact revenge on British Bermuda for its support of the Confederacy. (Though officially neutral, Bermuda got rich trading with Confederates as they circumvented the Union blockade of Southern U.S. ports.)

The attack never came, and 70 years later, Americans were posted to the very fort that was built to defend against them. U.S. troops bolstered Bermuda’s defenses here during World War II. A decade later, in 1957, Fort Scaur became one of the first fortifications in Bermuda (there are 90 or so) to be opened to the public.

The fort sports cannons, gun emplacements and a cleverly designed defensive moat, which stretches from Ely’s Harbour to the Great Sound and now forms part of a meandering 22-acre garden. Two 64-pound guns (one is still there) were mounted on disappearing carriages that recoiled for reloading after being fired. The fort was built to be barely visible from the sea, and it contains subterranean passages. Fort Scaur is also home to the venerable old Weather Stone, touted by islanders as a reliable barometer. A notice board helpfully informs visitors to Fort Scaur that “if ever it is white on top, it is snowing”.

Simply put, there is no better place in Bermuda to watch the sun go down than at Fort Scaur. The fort is open daily from sunrise to sunset and offers restroom facilities. Admission is free.