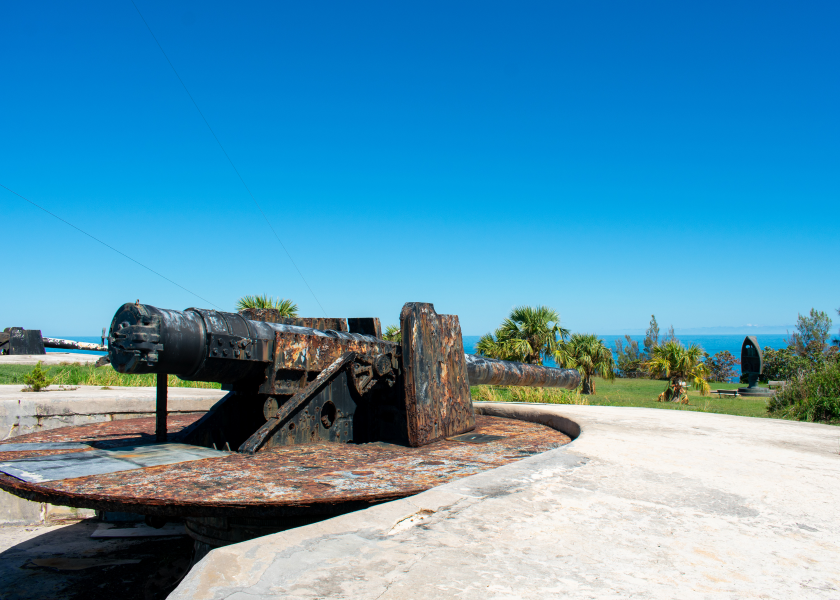 Great Head Battery, also known as St. David’s Battery, can be found at the eastern-most point of St. George’s parish in St. David’s Island. Built in 1910, it spans 24 acres and includes the beautiful Great Head Park.

Also known as “Examination Battery” during wartime, Great Head Battery was a fixed battery of rifled breech loader (RBL) artillery guns, built and manned by the British army. This battery was the first one designed specifically for rifled breech loaders, whereas other batteries and forts built prior were designed to be equipped with cannon.

The two breech loader guns mounted in the battery were constructed in the UK and are the largest ever mounted in Bermuda. With a range of seven miles, they could easily stop enemy ships from coming any closer to the island.

During both world wars, St. David’s Battery was designated as the “examination battery” because an officer of the Royal Naval Examination Service was taken out to meet ships arriving off Bermuda. The ships were stopped under the watchful eyes of the gunners at St. David’s Head. The naval officer would then examine the vessel and documents before allowing it entrance into any of the harbours.

The fort offers magnificent views of St. George’s Harbour and Castle Harbour, and visitors can enjoy trails that wind around the park for miles (though wear good walking shoes; the terrain is hilly and uneven).