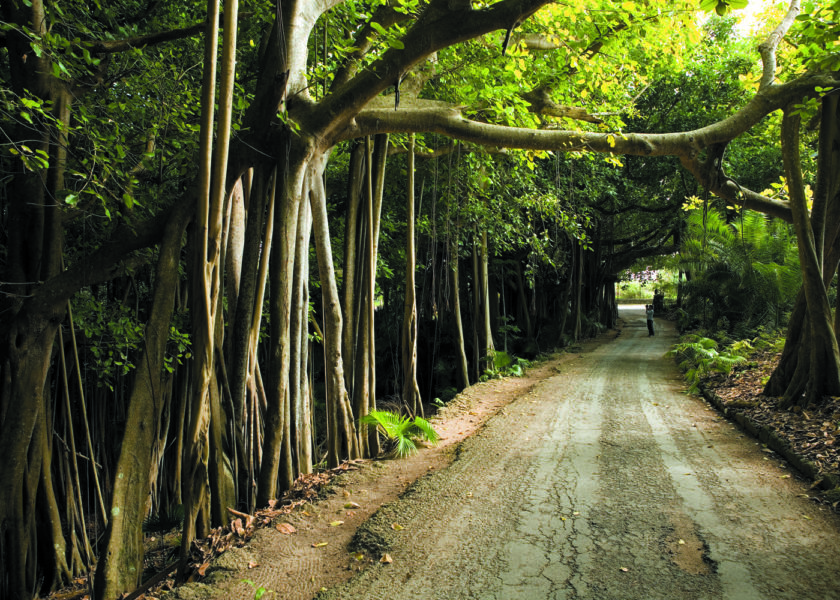 The next time you’re looking for a diversion from reality, consider Southlands for a simple, scenic slip into nature.

The sprawling, 37-acre property in Warwick parish provides the perfect escape from modern-day life, with its natural oasis of towering tree canopies, heritage architecture, and overgrown quarries on the south shore. Coupled with its exotic flora, the property features nine gardens and six ponds, long-since-abandoned homes, as well as a mausoleum for the late owners, James and Anna Morgan. The estate stretches towards the south shore and has its own beautiful and secluded beach known as the Marley Beach.

Southlands is rich with history and rugged beauty. Before becoming a national park, Southlands exchanged hands many times. Local folklore dates Southlands’ construction back to the 1700s, when the ministers of Warwick’s Christ Church used to live there. During those days the ministers would take classes at the estate when Warwick Academy, the island’s oldest school, was going through a bad time.

By the nineteenth century Southlands was owned by the Dunscomb family. When Lydia Lea Dunscomb, a spinster, died in 1913, ownership of Southlands and the surrounding 31 acres fell into the hands of two cousins, who promptly sold it to the Morgans for £1,000. In 1913 this sum translated roughly into five thousand Canadian dollars, a modest sum for a Montreal millionaire.

Southlands was apparently not in good shape, being replete with excavation sites that provided limestone to many buildings in the City of Hamilton, but for the Morgans it exuded possibility. Fallen to its role as a quarry, the grounds became littered with scrub, and the estate lost much of its charm. However, James Morgan and his wife decided to convert the land into a private estate and refuge from metropolitan life. Naturalistic gardens replaced rubble, ponds filled shallow pits and greenery soon grew from the forty-two quarries; the Morgans breathed life back into Southlands.

The gardens radiated out from the estate’s namesake homestead, a classic, late eighteenth-century Bermuda home with a characteristic hip roof and twin butteries. A constellation of smaller cottages dotted the property.

Unfortunately, by the early twenty-first century, the Canadians were long gone and Southlands had fallen prey to neglect and decay.

Scrub had invaded its gardens and the main house stood empty and abused by Bermuda’s harsh climate. Also by this time, Bermuda as a whole had arrived at a tipping point: could it as a society afford to preserve such inviting glades of serenity or must the ethos of luxury tourism sweep all before it? The christening of Southlands National Park in 2013 tipped the balance in favour of sustainability and the preservation of a distinctive piece of Bermuda heritage.

For the adventurer today, the unregulated and unmaintained Southlands Estate is a frontier waiting to be conquered. It sprawls across the whole Southlands neighborhood and includes a shady valley forest, a tomb, and many abandoned buildings to investigate.