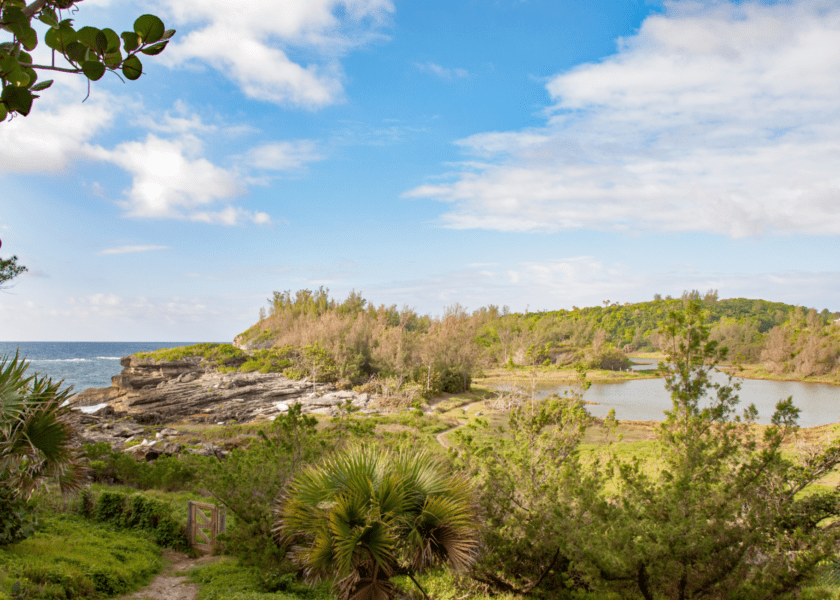 Spittal Pond is Bermuda’s largest nature reserve and wildlife sanctuary, seen on contemporary maps of Bermuda as a reassuringly large green blob in Smith’s Parish. This stretch of land consists of a diverse range of habitats including a dramatic coastline, flora and fauna, brackish and freshwater ponds, a dairy farm, mangrove swamps, a spillover salt marsh flooded by the sea during storms, and extensive areas of woodlands. Of course, for families, it’s a scenic place to go for a reasonably lengthy ramble with children and dogs, and a favourite venue for fishing off the coastline as well.

The area originally consisted of 10 strips (north to south) of privately owned land that escaped development due to it housing one of Bermuda’s few salt marshes, making it unsuitable for development. Economic growth increased from the 1960s onward, and much of what was once farmland has been consumed by hotel and housing expansion. In response to this growth, active conservation has become more and more crucial and our parks particularly precious. Spittal Pond is arguably the most popular. Today it is legally protected green space jointly owned by the Bermuda Government and the Bermuda National Trust.

Spittal Pond is a major attraction for nature enthusiasts, particularly birdwatchers. Its diversity of habitat makes it the bird-watching jewel of the island, with 20 bird species regularly wintering there and a total of 200 species having been recorded as visitors.

The reserve is also a major attraction for those who may not be particularly interested in birds but who appreciate its variety of trees, shrubs and wildflowers. Overall, the reserve wears green, but after a severe storm such as Hurricane Igor in September 2010, the salt wind can burn the trees to autumnal bronze. Bermuda’s own palmetto is plentiful here as are bay grapes, whose round hardy leaves are resistant to salt and turn red as they age.

On the eastern end, pittosporum trees dot the grassy slope, as do Bermuda olivewoods. Casuarinas, planted to replace the endemic cedars decimated in the 1946 cedar blight, are now also abundant, although hurricanes often uproot them. (Since Hurricane Fabian wreaked havoc in 2003, cedars and palmetto have replaced many invasive species.) Added to the mix are spice trees and the invasive fiddlewood and Brazilian or Mexican pepper on the woodland trail.

And then there are the dramatic geological formations embedded with fossilized palmetto stumps and fronds, ghostly reminders of Bermuda’s original forests. One especially interesting spot is the aptly named Chequerboard on the western end. Hidden by limestone rocks whose slatelike layers resemble millefeuille pastry, it’s a flat rocky floor, scored into distinct squares and surrounded by dramatic limestone crags overlooking the South Shore. It provides a record of sea level recession from the time of the last interglacial high sea stand around 120,000 years ago. Apparently, during the eighteenth century the platform was the location used to strip whales of their blubber after they had been hauled to shore.

Explorers with a taste for history will want to seek out the cave formation called Jeffrey’s Hole. According to local lore, it is named after an escaped slave who once hid there for several weeks. Sadly, he was caught and what happened to him after that nobody knows. Now, Spittal Pond is an important part of the African Diaspora Heritage Trail.

Another historically significant rock has undergone a name change as part of Bermuda’s 400th anniversary celebrations. Once called Spanish Rock and transferred to the National Trust by the Government in 1976, it carries the initials of a sailor and the date 1543. However, more recent research suggests the initials stand for Rex Portugalis (King of Portugal) and were carved by a marooned Portuguese sailor watching out for a ship from the cliff top. Perhaps he intended to claim Bermuda for Portugal. And so the new name, Portuguese Rock. In any case, the initials are the earliest physical evidence of human presence on the island. Whatever the name, the rock offers just as good a vantage point as it did in 1543 for watching the shearwaters and the humpbacked whales on their spring northern migrations.

Spittal Pond has in the past been called Brackish Pond due to its brackish water quality, and Peniston’s Pond, named after the family that owned some of the land where Spittal Pond nature reserve now sprawls. It hosts a number of interesting qualities, including its tendency to turn pink in the summertime due to the algal blooms and also the fact that it mysteriously houses eels. It’s unclear exactly how the eels wound up in Spittal Pond (ocean surge or by way of their own determination) but members of the public are encouraged to report eel sightings.

Spittal Pond nature reserve is well worth a visit with your sturdy walking shoes, whether it’s history, geology, or nature that strikes your fancy. The park is open from sunrise to sunset and is free to enjoy. Visitors may park at either end of the reserve, though you’ll have to trek back the way you came to return to your vehicle, unless you’re comfortable walking along the road.