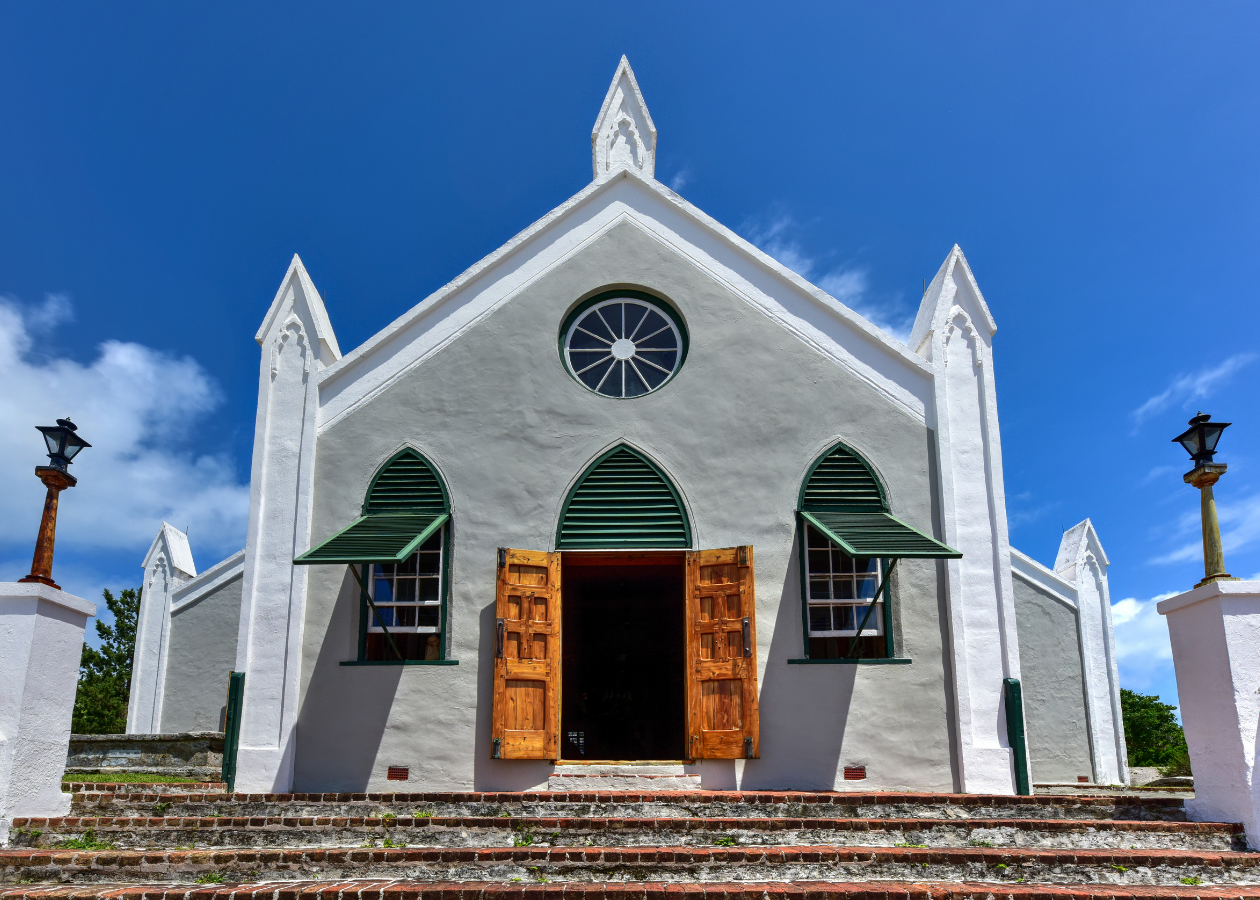 The history of one church in St. George’s is closely tied to that of the wreck of the Sea Venture and early colonization of Bermuda.

The story of St. Peter’s Church begins in the summer of 1612 when a small group of English settlers bound for Jamestown, Virginia, were unexpectedly caught in a storm and wrecked off Bermuda. About 60 settlers came ashore into the virtually uninhabited islands. They erected a temporary church of Bermuda cedar wood and palmetto leaves in time for Christmas services that year. The community has gathered here to worship ever since.

The first version of St. Peter’s – a small wooden church probably consisting of cedar log walls and lime plaster – was blown down in a strong gale in 1619. A more substantial timber-framed replacement was built but later destroyed in a hurricane in 1712. Rather than repairing the damage, it was decided to rebuild the church in stone. The original Communion table and altar rails from 1612 and the 1660 cedar pulpit were salvaged and are still in use today.

St. Peter’s Church served many functions during those early years, including holding the first government assembly in 1620, serving as a courthouse, and providing storage for the tobacco crop.

In the 18th century the church was repaired several times, with sash windows and a steeple added in 1766. Then in the early 1800’s a major expansion took place after the town’s population expanded with the arrival of the British military. An organ was installed some time before 1816.

Visitors will marvel at the amount of wood used in the church’s interior.  Bermuda was once covered in endemic cedar trees, but 95% of them were wiped out between 1946 and 1953 thanks to the accidental introduction of scale insects. Cedar wood is highly prized by Bermudians today, and St. Peter’s is a wonderful example of the historic cedar construction and furniture that were more prevalent in centuries past.

The church’s interior ceiling beams resemble the ribs of a ship’s hull, and the wall space is almost entirely covered with memorial plaques. The three-tiered pulpit demonstrates the relative importance of the information delivered there; the top tier was reserved for the delivery of the sermon. The cedar dole cupboard – designed for use in a church setting to hold charitable offerings distributed to the needy – was made around 1640 and restored.

Because of St Peter’s heritage as the birthplace of Christian worship in Bermuda, and in honour of the church’s 400th anniversary in 2012, Queen Elizabeth approved a redesignation of St Peter’s, to be known as ‘Their Majesties Chappell’. This title reflects the name used to identify St Peter’s Church in a warrant issued on 18 March 1697 to the ‘Master of His Maj’ies Jewell house‘ on behalf of King William III and Queen Mary.  The warrant requested the Master to send a silver Communion set to the Governor of Bermuda for use of ‘Their Maj’ties Chappell there’. This Communion set, engraved with the Royal cypher WR and William’s coat of arms, was delivered to Bermuda where it is currently displayed in the Vestry.   A grand Service of Intituling took place on 18 March 2012 to announce the redesignation of the church.

St. Peter’s Church is open to visitors Monday through Saturday from 11am to 3pm. A $2 donation per person is requested to help the costs of maintaining this historic site.