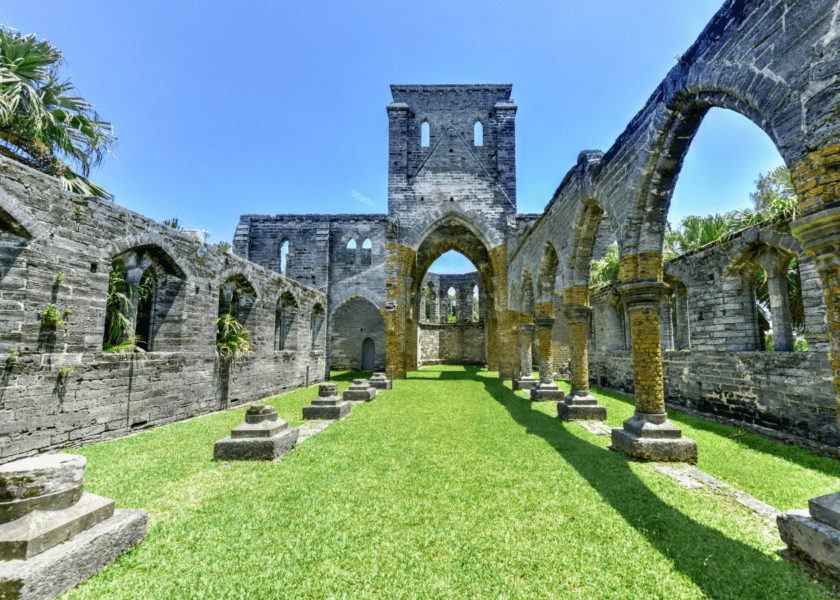 Places to Discover: The Unfinished Church

Rising like a ghost on the side of Government Hill Road in St. George’s is a beautiful relic called the Unfinished Church. Known locally as the “Folly of St. George’s”, it has been a centerpiece of gothic architecture and visitor curiosity for many years.

Despite Bermuda’s small size, it is home to the highest number of churches per capita in the world, and this one is beautifully incomplete. Located inside UNESCO World Heritage Site St. George’s, The Unfinished Church is a stunning structure of open stone archways, gothic pillars, and only the sky for a ceiling.

So what’s the story behind this unique attraction? Well, it starts in 1869 when St. Peter’s, Bermuda’s oldest church dating back to the 1612 English settlement, had fallen into disrepair after a storm damaged the property. Soon after, the Governor offered the land of the Old Government House to build a new church out of fear that demolishing St. Peter’s might spread disease in the community from the yellow fever victims that were laid to rest in the graveyard. Construction on this new grand, stone cathedral began in 1874 but abruptly stopped as the result of squabbles and lack of funds. It was left abandoned to the weather and the test of time, later also suffering hurricane damage in 1926.

In 1992 the Unfinished Church was declared a protected historical monument by the Bermuda National Trust. Today the structure has been fortified to withstand visitors, though it remains hauntingly unfinished.

For those looking to tie the knot in Bermuda, the Unfinished Church is one of the island’s most sought out event venues due to its archaic charm. The site can accommodate up to 200 guests and promises a magical experience like no other. Its structural stone arches are met with a grassy floor below and opens up to a blue sky above in the daytime, or a fairytale starry night in the evening.

While the church interior is available for private events such as weddings, it is not open to casual visitors. Still, explorers can peer through the empty stone archways that should have once housed stained glass windows for a glimpse inside.