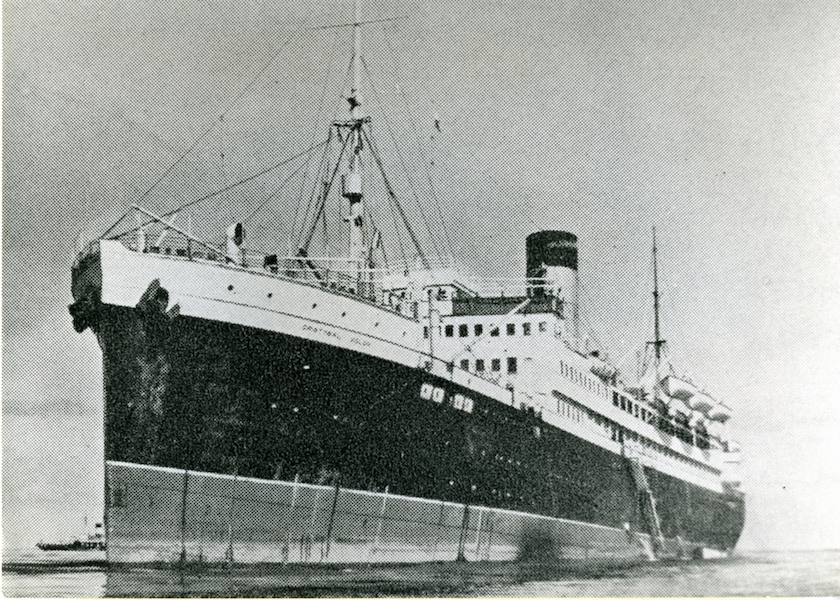 Decadence, piracy, and political unrest surround the history of this fine Spanish cruise-liner.

No passengers were on the ship when it sank, just the crew of 160 men. The ship had recently completed a trip from Mexico to Spain with 344 passengers on board, however. It was on its way back to Mexico, from Cardiff, Wales, when it wrecked on the North Rock reef system. Some thought that the cruise liner was transporting wealthy Spanish loyalists fleeing from the civil war, or collecting arms for the war during this trip.

The captain mistook North Rock communications tower for Gibb’s Hill Lighthouse, which was undergoing repairs at the time. The huge cruise-liner hit the reef at a speed of 15 knots, and was damaged beyond repair. The ship ran aground and remained almost upright and out of the water for several months.

No lives were lost in the wreck, but the ship’s position made it easy for Bermudians to take what they wanted.

What Happened After It Wrecked?
When attempts to pull the ship off the reef failed, the Cristobal Colon was looted and much of its contents were sold at auction. Countless Bermudian homes and businesses still contain furniture and paintings from this auction, and many more items were salvaged illegally. Hundreds of Bermudians took part in the piracy, but only 13 were ever convicted. A man who allegedly stole a radio from the Cristobal Colon defended himself in court, saying “why would I steal a Spanish radio when I can’t speak Spanish?”

In two 1994 articles in The Bermudian, Henrietta Rutherford recalls her husband’s participation in the looting. He only made the trip once, but found the ship swarmed by dozens of boats with the same idea. His salvage mission was cut short that night by the arrival of the police, and he wasn’t able to bring anything home.

Eventually, the remaining artefacts were stored at King’s warehouse in St. George. To pay the Corporation of St. George back for the storage, it was decided the articles would be auctioned off. The ship was paneled with carved mahogany, and lavishly furnished, so the auction garnered a lot of attention from the island’s residents. Rutherford has an original sofa from the ship in her living room. She recalls the train, the old rattle and shake, being packed with hopeful buyers every day.

Other artefacts her and her husband bought included tables and chairs, and Scottish-made bronze lanterns. These furnished Tom Moore’s Tavern, which the couple owned, but were lost when the Tavern was sold to new owners.

Rutherford outbid others for a series of bronze-framed windows. A hexagonal table from the ship’s smoking room is now in her household. This is just one example of a Bermudian home outfitted with artefacts from the Colon – legally or not.

What Happened to the Crew?
It seems that the crew sympathised with the losing side of the Spanish civil war, communists loyal to the Second Spanish Republic. For many months they were left in Bermuda, with neither the Spanish or Mexican governments willing to take responsibility for their safe return.

The Bermudian government put them to work, defiant at having to feed and house the Spanish nationals. Apparently, the Bermudians also disdained the Spanish crew because they could not speak their language. The crew was involved in construction projects, repairing Barry Road and restoring Gates’ Fort in St. George.

Today, the crew would probably be classed as asylum seekers. On Christmas Eve, they boarded a ship bound for France, but were refused entry until their voyage ended in Santander, Spain. It was thought that they were all executed by the Franco government upon their return to Spain. In their absence, Franco, a nationalist and catholic ruler, had won the war and wanted to exterminate those who did not support his regime.

What Can you See?
The ship no longer stands on top of the reef. It was used by British and American forces for target practice during the second World War, and sank. The ship has been flattened over time, and it is spread over 100,000 square miles of the sea floor.

You will see mechanical parts from the ship, like boilers, steam turbines, and propellers, which are still whole. There is a bath tub in the sand at the stern, and you can see rectangular portholes in the ship’s side. There are even some unexploded artillery shells visible among the wreckage, offering divers hours of exploration. It is in 15-60 feet of water, one half of the ship on either side of North Rock reef.

The ship is noted for providing large, dark hiding spots for adult groupers. It is just on the edge of a seasonally protected area in the North-East of Bermuda, which black grouper use for spawning in the summer months. You can also see wrasse, snapper, schools of blue chromis, and large barracudas. Blue tang also rove over the reef and wreck in large schools. Hawksbill turtles can sometimes be seen hiding among the reef.