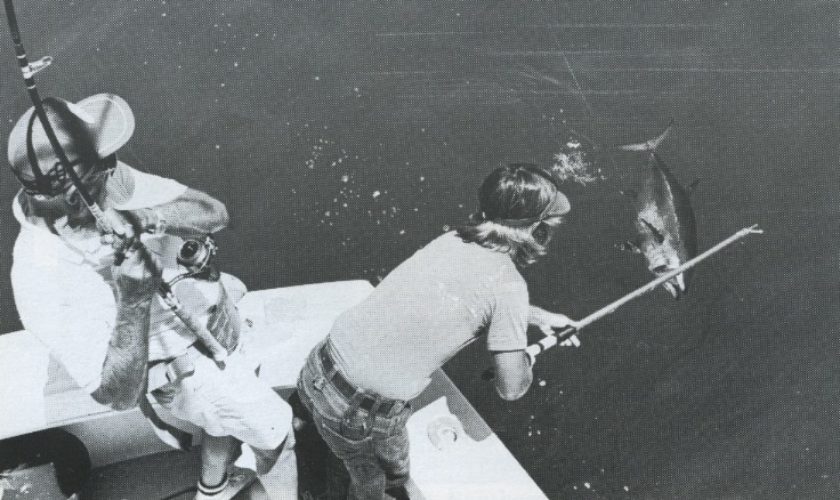 Slideshow: ILTT Over the Years

BIG HAUL: More than 40 fish, including 19 Allison tuna, 18 albacore, and four blackfin tuna were taken by this group of anglers in one day’s fishing from Guide Russel Young’s “Sea Wolfe.” The anglers were officers from the frigate HMS “Whirlwind.”

September 1968 cover of The Bermudian magazine.

Light Tackle Tournament winners, the Virginia Angler’s Club, with a sampling of their catch. From left: David Lines (a Bermudian guest of the club), William B. Duval and Richard Stephenson. Kneeling are Mark DeMoura (mate) and Teddy Fisher (captain). 1977

Anglers rise at dawn to prepare for the day’s fishing. 1969.

Don Lafferty of the Lac-A-La-Croix (Quebec) team bringing in a big Allison tuna on a 30-lb test line, skipper Ronnie Boys of the cruiser Miranda sinks his gaff into the fish, which turns out to be a 74.5-pounder and the high point fish taken during the contest. 1968.

Skipper Herbert Adderley and his mate of the cruiser Fair Lady (standing) with the team from Lc-A-La-Croix which took fourth place; from left, Don Lafferty, Walt Weber and John Hunter.

September 1969 cover of The Bermudian.

Busy scene at Mangrove Bay, Somerset, during the tournament. 1966.