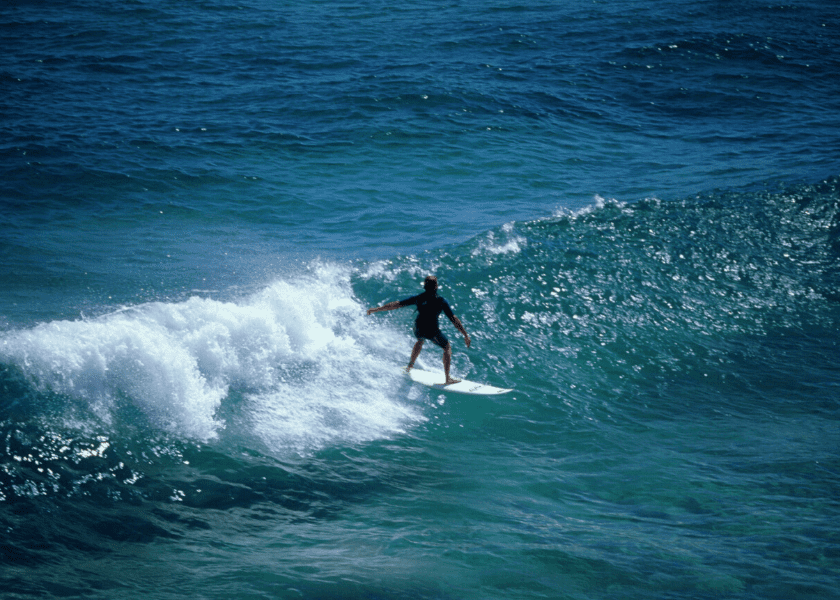 If the surfer spirit has shown us anything, it’s that they will find a wave and something to ride it with wherever a swell may roam.

Whether it’s Lieutenant Kilgore liberating an occupied Vietnamese beach with an outstanding break — “Charlie don’t surf!” — or Red Bull athlete Ramon Navarro in Antarctica, the search for the perfect wave spans all corners of the globe.

Here at home, the conditions needed for a good swell are hard to come by, but knowledge is power, and Cullen O’Hara from Isolated Surfboards knows exactly where to go and what to look for in your quest for that fabled endless summer in Bermuda.

The Ideal Conditions
“Any swell from the south or east is preferable and the wind should be as light as possible or from a northerly direction,” says Cullen. “Without going into too much detail, there are scenarios during which this happens pretty frequently, especially in the winter.”

“Bermuda’s local surf community is a dedicated bunch and are able to find waves by being glued to the weather charts as well as keeping up with the multitude of online resources. I, like everyone else here, never had my hand held when it came to where and when to go, but with a bit of perseverance, a good attitude and a lot of patience, there may just be a wave waiting for you out there. Happy hunting!”

The Dead Zone
“There then exists a fairly large ‘dead-zone’ between Devonshire Bay and Tuckers Town, but the beaches of Tuckers Town can produce some quality waves with everything lines up. When it does, the local crew is usually on it, and it’s a precious jewel to them, so if you decide to show up on a good day, it’s best to watch it for a little bit before paddling out to get a good perspective on the dynamics in the water.”

Sonesta
“The first spot of any real quality is a reef break off of the Reefs Hotel named ‘Sonesta’. This place only happens maybe a few times a year, and it’s should be reserved for experienced riders as it only starts to break at 8’ and over and can deliver a good thrashing.”

“It’s also a fair way off shore, so you better be a good swimmer if you lose your board! For those without the will, it’s a great place to watch the local guys and gals tackle a truly world class wave. Sonesta requires a good sized hurricane swell and generally light wind.”

The Shoe
“The trick to the ‘Shoe’, isn’t actually how much swell is in the water, but actually how the sand is distributed throughout the Bay. Summertime typically produces a steep beach profile, which is the Achilles heel of Bermuda beaches, as the wave has no time to set-up before breaking directly on the sand. When the profile is a bit more gradual, the waves have more time to develop and the rides are much longer and more forgiving . This usually happens after a significant swell or series of swells, usually in the fall/winter. When the sand is good, one can find a wave at the ‘Shoe on most days, with high tide being preferable.”

Southlands
“Southlands is a bit more exposed than the ‘Shoe, which means it gets the benefit of more swell, but also more wind, which isn’t always a good thing. The waves here are a bit faster, and with a few more rocks strewn about, isn’t for the absolute novice. As a predominately sand bottom break, it suffers from the same illness as the Shoe and placement of the sand will make or break a session.

Grape Bay
“Grape bay is another fairly exposed beach break, which is temperamental, but can produce some fun waves when the sand and swell are right. Typically anything with a bit more Easterly direction to the swell is favorable, and like all the other beaches, high tide is preferred. You might want to cozy up with someone in the neighborhood because it’s a private beach and parking can be a little tricky!”

The Bay
“Hungry Bay or just ‘The Bay’, as is affectionately known, is a very reliable reef break (meaning it breaks over rock, not sand) that has a gentle, albeit short, wave at the mouth of Hungry Bay. Tide varies depending on the size of the swell, but it’s always worth a check if nothing else is working!”

“Next on the list is the general area stretched between Hungry Bay and Devonshire Bay. There are a handful of inshore reefs that can all produce a good wave, with each favoring their own specific combination of tide/swell/and wind.”

North Rock
“Winter time swells come in from the north and bombard the outer reef line and on the right days, can be a surreal experience. Being 8 or so miles out, it’s very tricky to read conditions, so it’s a hard place to gauge from land. With that said, if you have the capabilities and have a sense of what’s happening in the water, it may be worth a trip in the boat. But just in case the waves are no good, be sure you bring your mask and snorkel!”