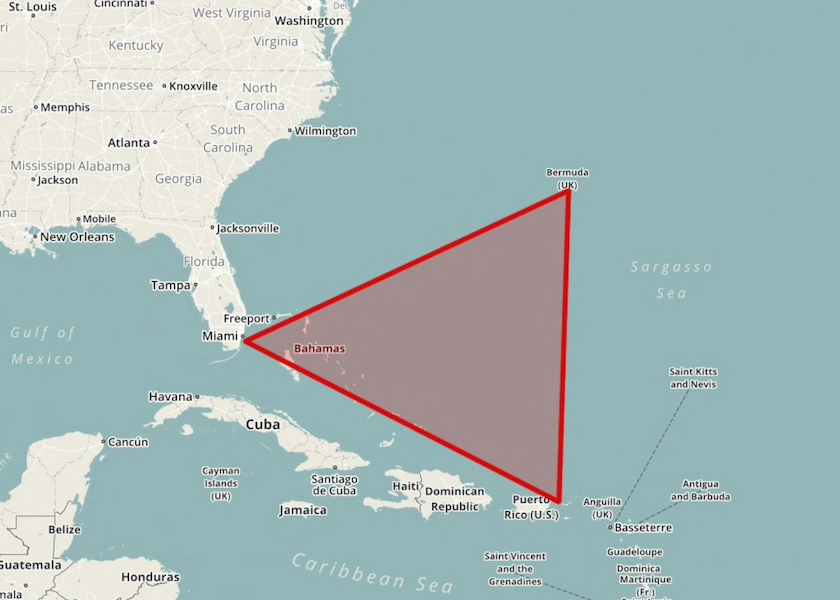 9 Theories Explaining the Mystery of the Bermuda Triangle

On September 17, 1950, a man named Edward Van Winkle Jones published an article in the Miami Herald that would condemn every Bermudian to a lifetime of fielding somewhat mildly infuriating questions about the Bermuda Triangle. The story has been so popularised in the 64 years since, this particular Onion couldn’t even get into a cab in Split, Croatia, without it being mentioned —“Ah, Barrmuda! Like ze Triangle?” Thankfully, the cabbie left it at that, but others are not so forgiving.

The questions inevitably come after an introduction, when a person learns you’re from Bermuda and is apparently immediately filled with burning questions regarding our homeland and the fable with which it is associated (the residents of Loch Ness, Scotland know exactly what we’re talking about.) First days of school for a Bermudian studying abroad can turn into a day-long Q&A session, where the questions range from skeptical…

… to the utterly absurd…

“… have you ever been lost in the Triangle?”

… and some just assume that, being from Bermuda, you’re an expert on the subject…

“… so what’s the real reason those ships and planes disappeared?”

While our humble home in the Atlantic may be thought of by the international community as a tax haven and the eponymous home of above-the-knee shorts, it is the mystery of the Triangle that has become our most defining feature. Anywhere a Bermudian treads these days, inane questions about this supposedly mysterious tract of water inevitably follow. We’ve all experienced it, and we’re all tired of it.

So please, world, stop asking us about the Triangle. Instead, here are nine theories explaining the Bermuda Triangle, and the one reason for why they are all wrong.

Magnetic Fields
Compasses are apparently fond of spinning wildly out of control when inside the Bermuda Triangle, as you well know. Why, exactly? No idea.

Atlantis
Yes, the underwater city of legend could also be to blame for the strange occurrences. Believers argue the “energy crystals” that once fuelled the city interfere with navigation equipment.

Other theorists have even more evidence, pointing to what they say is obvious, more easily seen evidence: the Bimini Road, a strange rock formation composed of uniform, seemingly sculpted towers of rock just of the coast of the Bahamian island of Bimini.

UFOs/Aliens
An underwater alien spaceship could be using their malicious alien technology to target passing ships and planes because, well, what else would aliens do after crash-landing on Earth?

“The Government”
A number of theorists claim the American Government’s AUTEC base (Atlantic Undersea Test and Evaluation Center) — located on the Bahamas’ Andros Island, right in the middle of the Bermuda Triangle, where the Navy tests out subs, weapons and sonar — believe the government has been working with aliens and that AUTEC is actually a testing ground for reverse-engineered alien technology.

Time Vortex or “Electronic Fog”
In 1970, Floridian pilot Bruce Gernon and his father were en route from Andros Island to Bimini Island in the Bahamas when they came across a strange cloud that they say grew exponentially before morphing into a tunnel.

Naturally, he flew right into the tunnel. When he came out, he was hundreds of miles off course and could not have possibly travelled that distance in such a short period of time.

Methane Hydrates
Pockets of trapped methane gas that become unlocked by seismic activity can unleash a cloud of methane gas into the water and air, reducing the density enough for planes and ships to instantly drop. Or so the theory goes.

Truth is, methan hydrates exist all over the world and in far greater numbers than those located around the Triangle.

Pirates
Apparently pirates — yes, pirates — could also explain many of the disappearances in the Triangle, although we here at The Bermudian can’t immediately recall much of a pirate presence in the area subsequent to the Napoleonic Wars.

During the Golden Age of piracy from 1650 – 1730, Bermuda produced its fair share of scallywags to go up against the likes of pirates such as Blackbeard, but nowhere near as many as its Caribbean counterpart.

A Downed 11,000-year-old Comet
Theorists point to a comet that may or may not have crashed into the Atlantic more than 11,000 years ago — where the Triangle is today — speculating that it has otherworldly electromagnetic properties that would disrupt navigation equipment. Unfortunately, nobody knows whether such a comet even exists.

Or You Could Just Listen to Carl Sagan
In an interview with Playboy magazine in 1991, legendary astronomer and physicist Carl Sagan was asked to explain the Bermuda Triangle. We tend to agree.

Playboy: What about the Bermuda Triangle? How do you explain that?

Sagan: Statistically, it’s a fallacy. Compared with other places in the world as well traveled as that area of the Atlantic, do airplanes and ships go down more? The answer is no. Why is it always planes and ships that get lost? It’s because they can sink in water. If we started losing trains–if we had a Duluth Triangle in which trains began disappearing–that would be interesting.