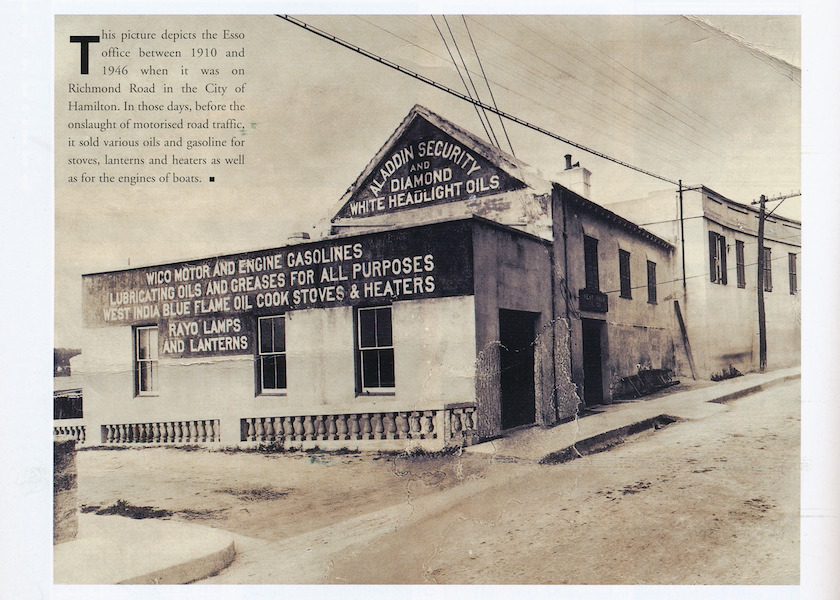 The Bermudian’s Alamanac: The Esso Office

This almanac was first published in The Bermudian in October 2003.

This picture depicts the Esso office between 1910 and 1946 when it was on Richmond Road in the City of Hamilton. In those days, before the onslaught of motorised traffic, it sold various oils and gasoline for stoves, lanterns and heaters as well as for the engines of boats.

Bermudians are spending more and more time in traffic these days – our cars and cycles have become our home away from home. But that wasn’t always the case. For many years Bermudians opposed the idea of motor vehicles. It was World War II that brought the American Forces, who, to connect their two Bermuda bases, tarmaced the main roads of the island. Motor vehicles were officially allowed for private use for the first time in September 1946. During that time, Bermudians remained staunch in their idea to limit vehicles on the road and predicted there would never be more than 1000 licensed vehicles on the road.

Source: Bermuda: As a Matter of Fact!

In October 1948, W. Whittemore’s daguerreotype rooms on Reid Street were advertised in the Royal Gazette. An early form of photography, the daguerreotype created a highly detailed image on a sheet of copper plated with a thin coat of silver without the use of a negative. In the mid-nineteenth century it was a popular means of taking family pictures. The Gazette had high praise for Whittemore:

“We consider Mr. W. as the best Daguerreotypist that has ever visited these shores, and his likenesses are as good as any, and preferable to many, said to be the performances of the first artists of the United States. We recommend those desirous of possessing a facsimile of their outward person to pay Mr. W. a visit.”