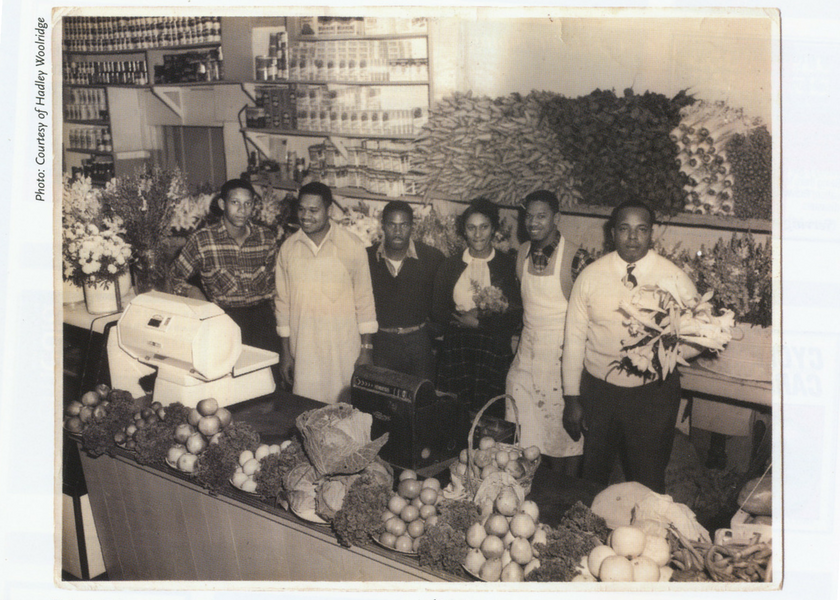 This almanac was first published in The Bermudian in September 2002.

Buster Tucker’s Handy Market was one of many small grocery stores that dominated the local landscape before the era of supermarkets. Semi-retired taxi driver Hadley Woolridge worked there as a young man for more than six years.

Buster Tucker sold fresh vegetables, mussels, live lobsters and meat, which he procured from a slaughterhouse, Woolridge recalls. The Handy Market operated on the corner of Church and Court Street, where the drive-in Bank of Bermuda is now located, and later moved further south on Court Street. Bobby Raynor, Stanley Woolridge, Bishop Douglas, Claudine Richards, Hadley Woolridge and Buster Tucker are seen in this 1950 photograph.

On September 16, 1832, two years before emancipation, Richard Tucker, a free black man, founded the Young Men’s Friendly Institution, Pembroke. Its purpose, according to the 1840 Journals of Assembly, was “For promoting Industry, Honesty and Frugality and for raising Fund, by Contributions, for the relief of sick or distressed Members belonging to it.”

Tucker was president of the Friendly Institution, which existed at least until 1859 and beyond. In 1835, the Institution gained particular prominence when it took legal action against the American captain of the Enterprise, a ship that had entered Bermuda waters with 78 slaves on board.

Richard Tucker was praised by The Royal Gazette for his handling of the case that resulted in freedom and permanent Bermuda residency for all but six slaves, a mother and her five children, who elected not to remain on the Island. The Institution also worked to raise funds for the education of black children.