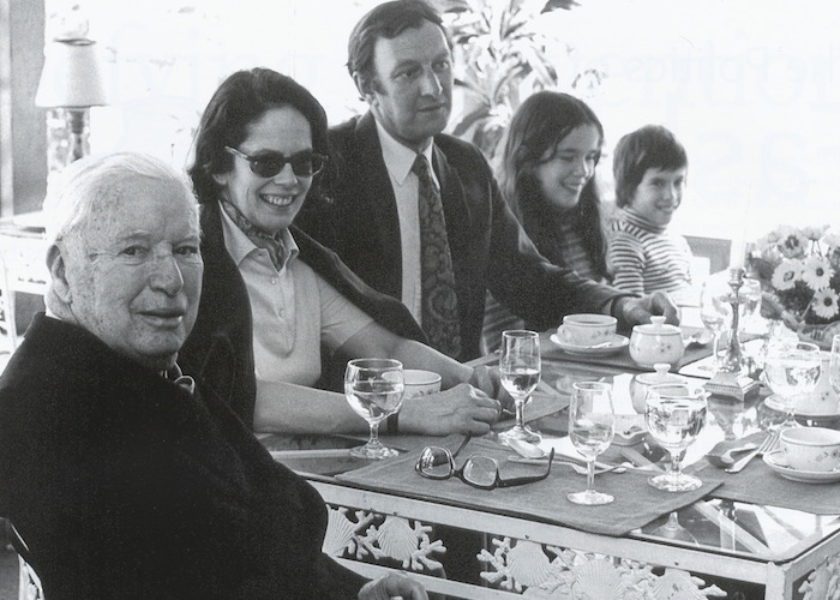 Photo by: The Bermuda News Bureau

This almanac was first published in The Bermudian in April 2002.

Photo: Charlie Chaplin, his Bermuda-born wife Oona and their family at Newstead in Paget in March 1972. The film legend and his wife – the daughter of playwright Eugene O’Neil – were on their way to the U.S. from their home in Switzerland to attend the Oscars. Chaplin was making his first trip to the U.S. since he quit his adopted country in protest over the treatment of Hollywood figures during the McCarthy era.

Bermuda was without a movie theatre for three years from 1984 when the lights went out at Rosebank Theatre. The theatre – which opened in 1959, the same year cinemas were desegregated was a victim of a new form of entertainment, home video. Rosebank was demolished and the Bank of Butterfield’s Rosebank Centre opened some years later on the same site. In January 1987, Liberty Theatre opened. Its first film was The Color Purple. Little Theatre opened four months later. By April 1990, Bermuda would have a third cinema, Neptune in Dockyard.

In 1993, the New Somers Playhouse opened in St. George’s. It remained in operation until January 2000, but the east end would not be without a movie theatre for long. Southside in St. David’s opened for business with The Hurricane two months later.

In April 1873, H.M.S. Challenger sailed into Bermuda and anchored at Grassy Bay. On a scientific expedition to explore the world’s ocean floors and depths, the crew and several scientists stayed for several weeks. The scientific team was headed by Professor C. Wyville Thomson and included botanist H.M. Moseley. Moseley collected many botanical specimens, which can still be seen in the Herbarium at Kew Gardens in London. The Challenger’s ocean research was of practical value as well since it gave valuable information to those involved with the laying of transatlantic telegraph cable.