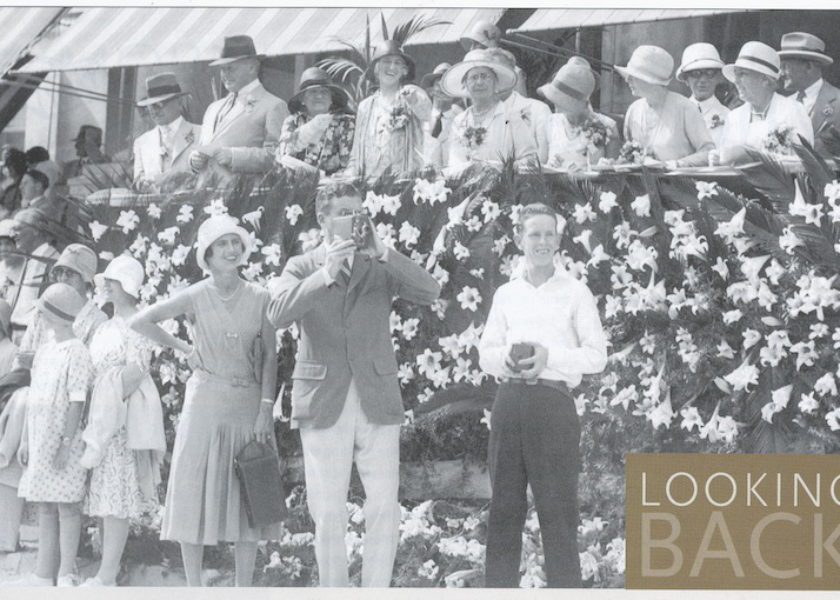 The Bermudian’s Almanac: The Floral Pageant, 1930

This almanac was first published in The Bermudian in May 2002.

Looking Back…
Dignitaries enjoy the first all-Bermuda Floral Pageant on April 27, 1930 beneath awnings at the old Hamilton Hotel. The parade was a regular feature during the 1930’s and was revived in the early 1950’s after a break during the 1940’s. It continued until 1968, the year a riot broke out. Plans to bring back the parade were hampered by the shortage of flowers as more and more land was lost to development.

As a Matter of Fact
May 24 has been a public holiday in Bermuda since 1902, initially observed as Empire Day in honour of Queen Victoria’s birthday. Later known as Commonwealth Day, it was first celebrated as Bermuda Day in 1979, the year of the first Bermuda Day parade. The parade was a recommendation of the Pitt Commission, which was convened to examine causes of the 1977 riots. The Commission called on Government to hold an annual festival, “which is specifically Bermudian.” The Commission said: “If Bermudians came together more in pursuit of shared interests…, that in our opinion would quickly move Bermuda towards a harmonious society and more rapidly solve its social problems.” The whole of May is now devoted to the celebration of Bermudian Culture and is known as Heritage Month.

This Month in History
On May 1, 1846, the lights of Gibb’s Hill Lighthouse in Southampton beamed out for the very first time. Erected by the Royal Engineers, it was the first lighthouse to be built in Bermuda and the second iron lighthouse in the world. The lighthouse was first proposed in 1830. The U.K. colonial authorities were convinced of the necessity of the lighthouse after they were provided with a map showing the location of 39 shipwrecks. Most were in the west end and only four of the ships were bound for Bermuda.