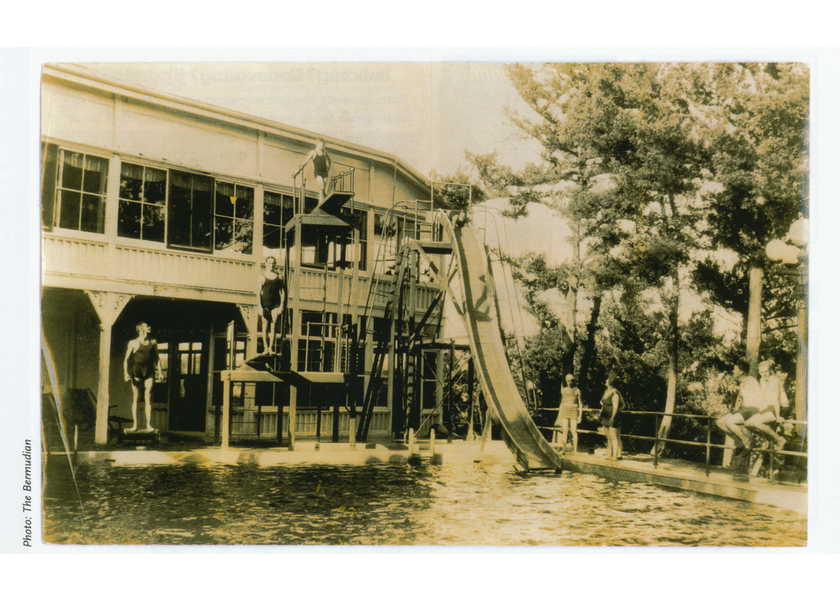 The Bermudian’s Almanac: The Hamilton Hotel

This almanac was first published in The Bermudian in October 2002.

The Hamilton Hotel opened its doors in 1863 as Bermuda’s first major hotel, but this 1930 photo of its new swimming pool gives no indication of its precarious existence. In its early years, it seldom made a profit, but by the turn of the 20th century had become the pride of Bermuda’s fledgling tourism industry. Located on Church Street, where the City Hall now stands, the two-storey building boasted 26 bedrooms, a balcony facing Hamilton Harbour and gracious reading and dining rooms when it opened. By 1910, it had 600 beds.

Nine years after the swimming pool addition, the hotel closed as tourists began seeking accommodation outside Hamilton. After the building was sold to the Bermuda Government in 1941, it was used as offices for the Trade Development Board, the Currency Board Control, the Department of Education, the Lady Cubitt Compassionate Association (LCCA) and the Bermuda Art Association. A December 1955 fire sealed the fate of the termite-ridden building. When government received a £50,000 cheque from Bermuda Fire and Marine several months after the fire, it was said to be the largest insurance settlement in the Island’s history.

On Friday, October 13, 1848, an unusually high tide caused flooding throughout most of Bermuda. In Flatts, water flowed over the bridge and road and into people’s houses. The flooding was so severe at the Foot of The Lane that “eleven persons in a large boat followed the course of the water and were floated over potato patches,” The Royal Gazette reported.

Much of the breakwater at Devonshire Dock was demolished, and cultivated land between Pitts Bay Road and Clarence Hill (now Cox’s Hill) was under four to five feet of water, while at Bailey’s Bay a retaining wall gave way and in several places the road caved in. The tide was reported to be three feet higher than an ordinary full tide.