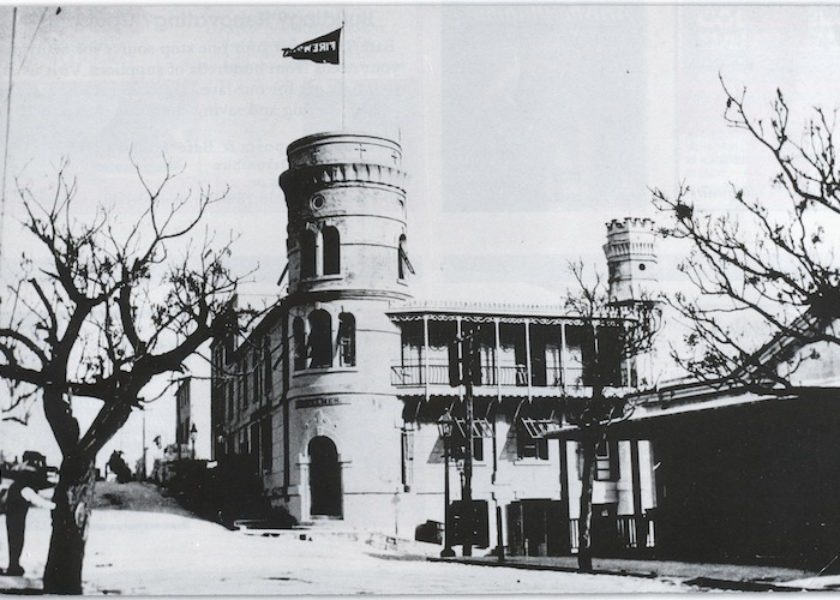 The Bermudian’s Almanac: The Hamilton Tower

This almanac was first published in The Bermudian in August 2002.

Photo: The Tower, on the corner of Reid and Burnaby Streets in Hamilton, was once a familiar sight to Bermuda residents. A general emporium owned by Samuel Nelmes, it sold a whole range of products from school shoes to stationery, books, china, art supplies and household goods. In 1884, it had a circulating library. The original building burned down in 1864. The one shown in our photo is its replacement. In 1953, the Bank of Butterfield bought the property, which was subsequently demolished to make way for its new headquarters.

August 1, 1842 saw the start of the first daily mail service between Hamilton and St. George’s. It was begun by Thomas Southworth of St. George’s and William Facy, a Hamilton livery owner and former English convict who was sent to Bermuda to serve out his sentence. Facy would set off from Hamilton in a horse-drawn carriage at 9 a.m. and return at about 6 p.m., calling in at Government House and Flatts Depot, on his way to St. George’s and back. He transported passengers as well. The new daily service was welcomed by the “mercantile community,” which wanted more regular communication between the towns.