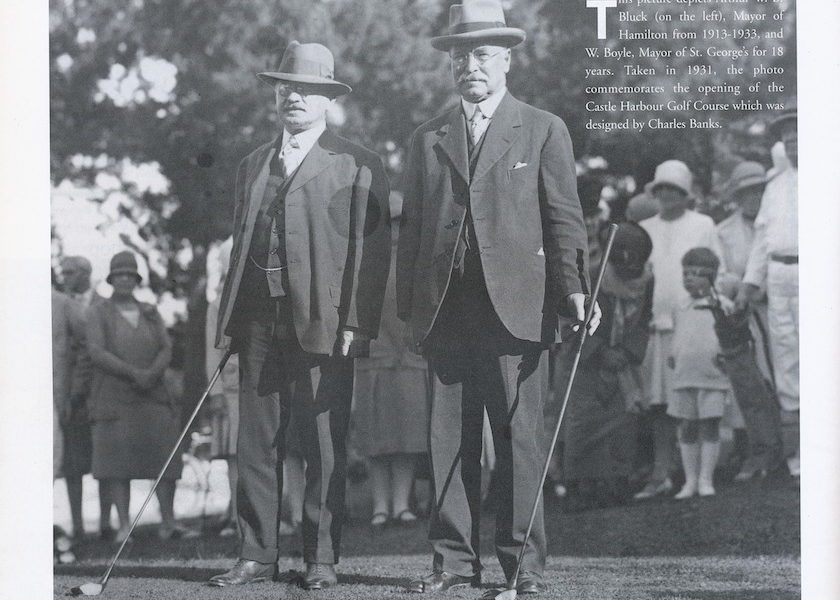 The Bermudian’s Almanac: The Opening of Castle Harbour Golf Course

This almanac was first published in The Bermudian in November 2003.

This picture depicts Arthur W. B. Bluck (on the left), Mayor of Hamilton from 1913-1933, and W. Boyle, Mayor of St. George’s for 18 years. Taken in 1931, the photo commemorates the opening of the Castle Harbour Golf Course, which was designed by Charles Banks.

Because so much of Bermuda’s land area is devoted to buildings, much of Bermuda’s fruit is imported, but that wasn’t always so. Fruit cultivation began with the first settlers in Bermuda. As early as 1616 various species of fruit were being introduced from the West Indies; and from 1644 bananas, plantains, oranges, lemons, figs, pomegranates and paw paws found ready markets in London, New York, Virginia and New England. The first bunch of bananas ever seen in England came from Bermuda and were exhibited by Thomas Johnson in his shop window on Snow Hill, London in April 1633.

According to Kenneth Robinson’s Heritage, when Governor Reid came to Bermuda in 1839, he became involved in establishing a military school to train Bermudian male youths to defend Bermuda in conjunction with H. M. Regular Forces. In the November of that year, he wrote a progress report explaining that the number of recruits had reached 34 and all but one were black. Recruits studied a variety of courses, including geometry, which was taught “to generally improve them as Artisans”. The applicants had to be at least five feet five inches tall, “able-bodied” and of good character. However, there was no discrimination on the grounds of race or colour.