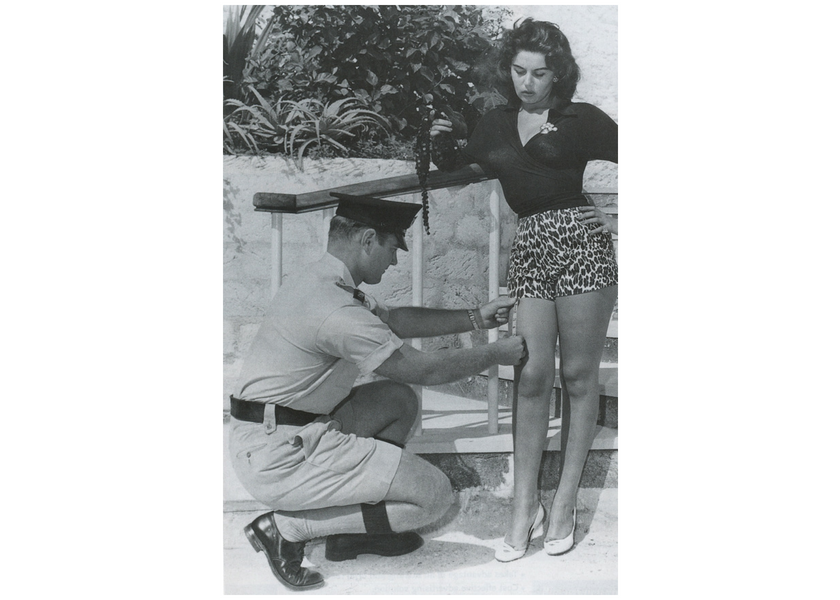 This almanac was first published in The Bermudian in September 2003.

This 1957 photograph of model/actress Eunice Grayson takes us back to the time when the Summary Offences Act was enforced. The Act required people to be properly dressed in public. The regulation length of attire was deemed to be no more than three inches above the knee. Police would sometimes measure the lengths to see if the requirement was being broken. This actress’s shorts certainly contravened the regulation and so she apparently received a warning and a green ticket explaining Bermuda’s laws and customs. No fines were ever given out and many a tourist left Bermuda with a green ticket as an unusual souvenir, a kind of tourism gimmick. The policy died out in the 1960’s, which was just as well since that was the era of the mini.

In September 1822 the Reverend John Lough, rector of St. George’s Parish, decided to visit D.M. M’Loughlan, the keeper of a grocery and liquor store. However, according to the Royal Gazette as printed in William Zuill’s Bermuda Sampler, the pastoral visit was not a happy one. When the rector entered the store at about 7 in the evening, he proceeded to call the storekeeper “an infernal scoundrel” while “bestowing some opprobrious epithets upon his wife and poking his umbrella in both their faces.” As a result he was taken before a Justice of the Peace for a hearing. The cause of his anger is not known – perhaps the rector was against the selling of liquor.