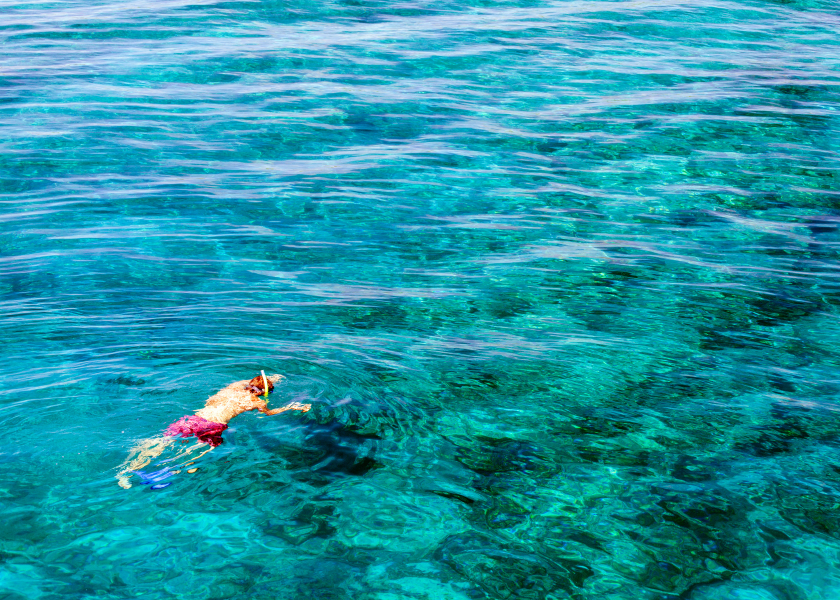 The Definitive Guide to Snorkeling In Bermuda

If you’re planning on spending time beneath the surface this summer, make sure you’re prepared with our guide to snorkeling. Exploring the rocks, reefs and coves that house some of Bermuda’s most colorful sea-life will be all the better if you know where to go and what to expect. Here we present the best places to snorkel and free dive in Bermuda.

Reef type: Lagoon reef. This means that the reef is in shallow water, and tends to have poor visibility when winds are not favorable due to a high concentration of sediment. It also sports a large number of soft and delicate corals, like spectacular sea fans.

What can you see there? Parrot fish, for sure – from rare and hulking Rainbow and Midnight Blue, to the more common Stoplight and Princess varieties. There’s also a large population of cocoa damselfish, which will boldly come right up to snorkelers whom they believe to be disturbing their nests. Also a great site to find angelfish cruising slowly over the reef.

Advantages: a shorter snorkel route in shallow water, good for people who aren’t strong swimmers. Unlike other reefs, Tobacco Bay’s waters contain tall, spire-like structures, as well as flatter ocean-bottom reefs. This varied habitat, with reefs available at all levels of the water column, provides niches for a diverse range of species.

Disadvantages: Tobacco Bay proper has become overrun with tourists, and the Bay contains a lot of trash, making for a less pleasant snorkeling experience and diminishing the number of fish and corals. The best snorkeling is outside of the swimming bay, to the east.

Reef Type: Rim reef, which means that the visibility is very good, but that wave action is much higher. This high wave action means that a variety of hard corals are abundant, and brain corals and star corals cover the reef surface here.

What can you see there? Although not often thought of as a good snorkeling location, this reef is full of rarer species, such as eels, trumpet fish, and porgies. It’s also full of huge herds of parrotfish, and home to a large population of yellowtail damselfish, which have spectacular blue spots in their juvenile stage.

Advantages: At Gravelly Bay, you’re sure to spot something that you’ve never seen before. Because few people visit the reef here, the fish are more abundant and the corals are healthier.

Disadvantages: The reason many people don’t visit Gravelly Bay is because it’s so inaccessible. There’s no real beach close to the reef, so it has to be accessed by swimming a moderate distance, or over sharp rocks. The high wave action may also be a problem for inexperienced swimmers, so flippers are a must.

Reef type: Rim reef. Cooper’s Island does not have as aggressive wave action as other rim reefs, but retains spectacular water visibility. The most popular corals here are brain coral and mustard hill coral.

What can you see there? The flat, sandy reefs of Cooper’s Island hold a wealth of strange species. Scrawled trunkfish are popular, as are Puddingwifes, which are both slow moving and curious towards snorkelers. Many larger schooling fish can also be found in the dark caves there, like snapper and grunts.

Advantages: This reef is the most accessible on this list, as you can swim out to it only a short distance from the relaxed shores of Cooper’s Island. In addition, the beach’s status as a nature reserve means that the ecosystems remain mostly undisturbed and flourishing. In particular, efforts to increase West Indian Top Shell populations have gone well here.

Disadvantages: the reef is actually more sparse than in many other areas of the island, and snorkelers should expect to traverse many areas of bare rock.

What can you see there? The reef is abundant with parrotfish, and schools of striking blue tang and colorful wrasses that travel together. Also a site for Blue Chromis, a unique and electric blue damselfish.

Advantages: The only beach on this list with a park nearby, you can fit a few different activities in to one day by being close to a snorkeling spot and also a spot for playing games or picnicking. The visibility is consistently clear, and the reef is largely unvisited and therefore undisturbed.

Disadvantages: The reef takes time to get to, as the beach at Astwood Park can only be reached by descending steep cliffs.

Reef type: Rim reef. Far off of Bermuda’s shores, North Rock navigational beacon juts out of the water. Below, a spectacular rim reef has formed, when in the early 1900s sea levels raised enough for the area to be submerged. North Rock is an abundant ecosystem, with all species of corals occurring.

What can you see there? Because it’s far off shore, in addition to the shallow water reef creatures, which it has in profusion, North Rock also carries the chance of seeing something really breathtaking, like a shark or ray. Deep-water species of reef fish also occur, like coneys, triggerfish, magnificent black groupers, and flamboyant scrawled filefish.

Advantages: Being so far off shore, north rock has become a powerful ecosystem, supporting both reef dwellers and deep-water occasional visitors. There’s the chance here to spot something you might only see once in a lifetime. Also, the water is invariably very clear.

Disadvantages: North rock can only be reached by boat and it takes an hour to get there, and because it’s so far out, you must take care to avoid rough seas by only snorkeling in light winds. In addition, the reef may be easier to dive than to snorkel, but snorkelers can still get a lot out of the shallow reefs at low tide.

Reef type: Located at 32°23’20.83 N, 64°53’19.32 W, eastern blue cut and blue hole are pristine snorkeling sites. They are made up of terrace and rim reefs, which have high visibility and variable wave action – as a snorkeler, you will likely only be able to reach the rim reef.

What can you see there? Spotted eagle rays can be seen grazing for crustaceans on the sandy bottom, and the cave on site is home to groupers and lobsters. Small, striking nudibranchs call blue hole their home, as well as large predatory fish, like tarpon.

Advantages: This deep-water site will give you the chance to see large predators, and other fish that are never seen in shallow water. The spectacular site is one of the only places where snorkelers can see these kinds of deep-water fish.

Disadvantages: Travel time and the possibility of exposure to rough seas are cons to this site, but they are well worth it to get to view the dazzling reefs below.

Reef type: The wrecks of the Constellation, Montana, and Lartington rest here in swimming distance of each other. Made up of rim and terrace reefs attached to shipwrecks, massive hard corals are abundant.

What can you see there? Large fish that like to hide in the shady hulls, like groupers, pompano, and jacks.

Advantages: This site has the added bonus of historical significance, and you can see many historical artifacts around the wrecks. In addition, it attracts great numbers of fish because the reef provides places for fish to hide within it.

Disadvantages: Snorkelers may not have as good a time as divers, because they won’t be able to access all parts of the wreck. For unconfident swimmers, this site may be too much.