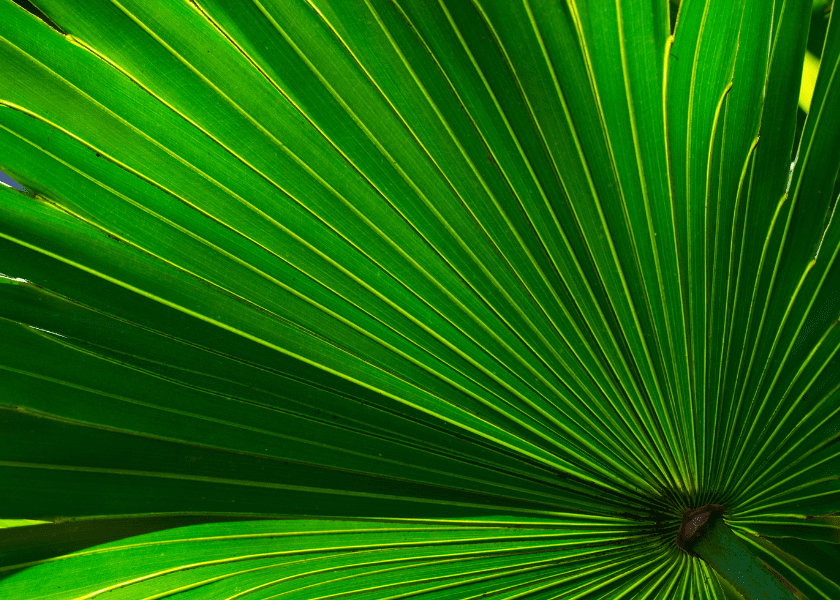 Bermuda’s endemic palmetto has bestowed its humble branches in the name of practicality
for over 350 years.

Thanks to our variety of palms, Bermuda is definitely an island with a fringe on top. We have
our royals, Cuban royals included, our sagos, our fans, even our Washingtonians or petticoat
palms. But all these were immigrants. Bermuda’s first visitors, or accidental tourists, would
not have seen any of these. No, the palms they saw were our own endemic palmetto, a
“great store” of them, as William Strachey put it in his True Repertory of the Wreck and
Redemption of Sir Thomas Gates, Knight upon and from the Islands of Bermuda. He was
one of the survivors from the Sea Venture shipwreck in 1609, and his narrative, together with
Jourdain’s, gives us a picture of what Bermuda looked like before it was settled.

About 300 years later, American botanist Nathaniel Lord Britton wrote his learned Flora of
Bermuda and explained that the official name for the palmetto is sabal Blackburnianum. Why
was Bermuda not mentioned? Well, apparently the plant was first named “as distinct from all
others” in 1829 by Glazebrook in the London Gardeners’ Magazine. “It’s specific name,”
Britton wrote, “is in honour of a Mr. Blackburn in whose collection in England it was then
known but all records of its origins had been lost other than it came into the possession of
his grandfather in 1737.” (Just as we have named our Bermuda mystery roses after the
owners of the gardens where the plants were first noticed, so, I suppose, did the Brits name
their mystery palmettos.)

These days, of course, it now has a more appropriate name: the sabal bermudana. Its
closest relative is the sabal palmetto found in the Bahamas, Florida and Cuba, so, Britton
speculated, it might have sprung in isolation from seeds floating into Bermuda.

However, to go back to the Sea Venture wreck, the survivors were probably more interested
in the practical uses of plants rather than their botanical status. In fact, at the start Strachey
was a little rude about the palmetto, saying, “…for the tree is high and straight, sappy and
spongious, uniform for any use, no branches but in the uppermost part thereof…” In other
words, in contrast to the cedars, the palmetto was no good for wood. Two years later
Governor Moore agreed with him: “The palme tree is no timber but it grows up in length so
they grow in bignesse but the palme tree the higher it grows so the smaller it grows.”

Nevertheless, while palmetto was hopeless for planking, its leaves, berries and pith had a
number of uses, as Strachey admits in his graphic description. For one thing, the fronds
offered shelter from torrential rains. “So broad are the leaves as an Italian umbrella: a man
may well defend his whole body under one of them from the greatest storm rain that falls, for
they being stiff and smooth as if so many flags were knit together, the rains easily slideth
off.”

It didn’t take long to extend the shelter idea by using the leaves for thatching cabins. And the
early churches, the first St. Peter’s, for example, had thatched roofs. The Pembroke parish
register records the 1677 order requiring each person to bring in “eight dozen good leaves or
else pay is 4d” for thatching Pembroke Church’s roof.

And the plant was edible, “…and roasting the palmetto or soft top thereof, they had a taste
like fried melons,” writes Strachey, and then more frankly, “…and being sod [stewed] they eat
like cabbages but not so offensively [causing flatulence] thankful to the
stomach.” (Incidentally, it’s interesting that he refers to fried melon since today that recipe is featured in Asia rather than western cuisine.) The berries were used to fatten the pigs and
were ground into meal for bread. In fact, the starving colonists in Virginia welcomed meals of
this kind.

Then came the cheering discovery that alcohol could be made from the sap, bringing with it,
however, all the social consequences of heavy drinking. Louise Hutchings Smith, in
Bermuda’s Oldest Inhabitants, refers to a Thomas Py and his wife, Ellen, who in July 1618
“were taken to the Grand Jury for suffering Bibby to be inordinately drunk in their house on
the Sabbath Day.” The liquor, or bibby as it was called, became so popular that an order had
to be passed in 1627 to stop people from using palmetto for drinking purposes since the
practice created a shortage of thatch.

By the eighteenth century, although slate was replacing thatched roofs, palmetto was still
being used extensively for a variety of tasks. To sweep the kitchen, colonists used a
palmetto broom or brush. To string their fish, they used palmetto string. To drive away
mosquitos or pesky flies, they used a palmetto switch. Indeed, according to Life in Old St.
David’s by E.A. McCallan, this practice continued well into the twentieth century.

Palmetto plaiting became a common activity and was extremely useful for making rope, fish
pots, sieves for meal and flour, napkin rings and baskets. Right from the start Bermuda’s
steaming summers meant that breeze and shade were important, so plaited palmetto hats
and woven fans were created. In his book, McCallan mentions Martha Hayward (née
Carter), who probably lived in Carter House, now a museum in St. David’s, until her death in
1791. She was famous for four things: First, she lived to the grand old age of 114 years.
Second, she had a remarkably good memory. Third, although she wore classes a few years
before she reached 70, after that age she dispensed with them as she acquired or possibly
reacquired perfect vision. Last, but most important, at least for the purposes of this story, she
apparently sent one of her homemade plaited hats to Queen Anne of Britain as a present. As
a consequence, Terry Tucker relates in Bermuda’s Story, Bermudian palmetto hats became
the rage in London.

Tucker quotes one Abbé Raynal as saying: “The English ladies never thought themselves
fine or well dressed but in small Bermuda hats made with palm leaves.” This conviction, of
course, was beneficial to Bermudians, who sent out quantities of palmetto plait to England to
be made up into hats. They were taxed a halfpenny on every score of plait. Unfortunately, as
fashions go, so too went this one, the English ladies eventually preferring plaited leghorn
hats. Still, Tucker explains in Bermuda Today and Yesterday, locals continued to make hats
out of coarser plait, which they sold to farmers and convicts on the island for one shilling
each. As for ladies’ fans, often made from intact fronds, they continued to be vital for
combating the heat during church or the occasional soirée right into the early twentieth
century.

During the nineteenth century, a very worthy-sounding lady, Mrs. Thomas Newbold, decided
to improve the standard of plait making and other “manufacturers” by founding the Society
for Promoting Industry. An excerpt from The Royal Gazette of July 1832 (included in William
E. S. Zuill’s Bermuda Sampler) reports on a sale held by this “useful and benevolent
Association”: “There was some straw manufacture which surpassed in quality anything of the
kind ever before manufactured of palmetto; and the attention of the curious was particularly
directed to a beautifully made plait bonnet bearing so strong a resemblance to Leghorn, that many fancied it to be manufactured of the straw known by that name.”

If it bore any resemblance to the beautifully woven hats now on display at Carter House,
then it certainly deserved such effusive praise. The society faded out as societies do, but
fortunately, the art of palmetto plaiting and weaving has not died out. Ronnie Chameau, who works from her charming studio, the Dolls’ House, on the North Shore, is well known for her
Christmas angels and dolls made of Bermuda plant materials. But how did she learn?

“Mrs. Rosemary Gleeson used to make dolls, but she never showed anyone how to do it!”
says Chameau. “But I had some of her dolls. I pulled them apart and put them back
together.” The advantage of palmetto, she says, is that it doesn’t have prickles. Also, it
doesn’t necessarily have to dry before weaving. She says: “Sometimes I take the new
growth from the top, weave it, and then let it dry. As it dries out it becomes almost white.” (In
fact, Strachey vividly described the heart and pith of the palmetto as being “so white and thin
it will peel off into pleats as smooth and delicate as the white satin into 20 folds…”)

Other times she dries the plants first—it takes about six months—and then weaves or plaits
strips into different patterns. She cuts the strips with scissors or, as Martha Hayward used to
do, uses a thick needle to divide them. On other occasions, perhaps to make an aging for a
doll’s hat, she will soak the palmetto strands in glycerine and then knit them together. In
addition to dolls, she also makes fans and palmetto-string bags for holding onions out of
whole fronds. “You keep the holes large so the air circulates,” she explains.

Fortunately, she loves not only to practise the art but also to teach it to schoolchildren, some
of whom may carry on the tradition. In any case, they should remember, as Louise
Hutchings Smith put it, that “the palmetto is a Bermudian, and a staunch native at that,
providing as it has done through the ages, something to eat, something to drink, something
to wear, and if need be a cabin to live in.”