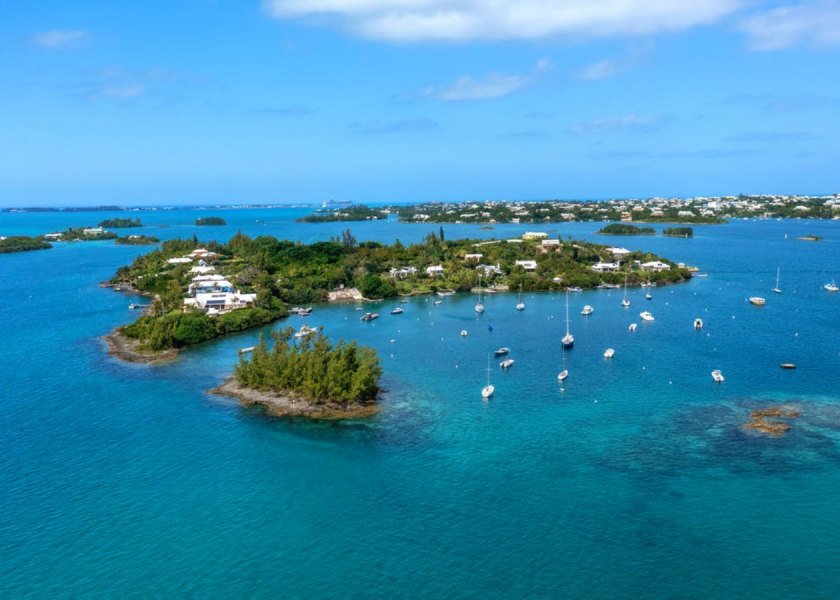 The Many Lives of Hinson’s Island

This article was taken from our archives. It first appeared in the June 2004 issue of The Bermudian. The full text appears here in its original form.

Hinson’s Island is the largest and probably the most historically interesting of the islands in the Great Sound. Although it is a private island owned by the residences, in the early years it had numerous owners and just as many purposes.

By the time Norwood’s Second Survey of 1662-3, Hinson’s Island is in the occupancy of Thomas Ackland with the tenement thereon. The island no longer carries the name Dorrel’s Island, so it may be presumed Ackland owned it.

How long Thomas Ackland continued to live on the island after 1663 we do not know. At some time before 1759, a Mr. Brown must have owned it, because when we next learn of the island it is “commonly called or known by the name of Brown’s Island.” In any case, it was Crown property by 1759.

When Samuel Spofferth died intestate, his widow and children sold it in 1775 for £120, subject to the quit rent in the original deed. The new owner was Theodore Godet.

Shipbuilding was almost certainly carried on in the very sheltered area, now called The Slips, on the south side of the island.

In 1951 a newspaper reporter wrote about the island: “It is believed to have been an embarkation point for certain ventures at sea in its early years.” It seems likely that it was during the Godet ownership that the island, geographically in Warwick parish, was transferred to Paget parish.

Again, according to Terry Tucker, Hinson’s Island was occupied in the nineteenth century by Francis (or Frank) Hinson, a grandson of Captain Francis Hinson, who settled in Salt Kettle early in the century, and a great-grandson of the Hon. John Hinson of Paget Island. However, by the end of the century the island was again abandoned as a residence.

It is perhaps worth noting that the Admiralty Charts of 1874 and 1894 (with corrections in 1898) call the island Godet Island with no reference to Hinson, while the Ordnance Survey of 1898-9 calls it Godet Island or Hinson Island.

The Savage Survey is very accurate and contoured. The scale is six inches to the mile. Hinson’s Island is marked Hinson Island or Godet Island. In the 1920s, Major Kitchener built a house there, later to be known as Pleasant View, which was conspicuous from everywhere in the harbour.

Obviously, the island was visited and explored. The survey shows a ropewalk, a small rain catch and tank, a limekiln, a jetty on the site of the present south dock and a fishpond to the southwest of the jetty. This pond still exists on a property now known as Trade Winds.

No habitation is shown, but a ruin is marked on or near the site of a modern house until recently known as Dew Drop Inn. This lies on the lane a little north of the south dock. There are signs of the foundations of a building just across the lane. This seems to be the location of the original house shown on Norwood’s Second Survey. Most of the island is wooded, but there are six open areas that may have been cultivated.

“It was not until March 1902 that Governor Geary (now Lt. General Sir Henry Geary, K.C.B.) officially proclaimed the existence of a fourth zone, which was limited to Hinson’s (Godet’s) Island and the water surrounding it. This zone, which lay the closest to Hamilton City, was used as a boarding school for most of the young boys who had been sent to the Colony.

“There was, at first, some opposition to the ‘Khaki School’ on part of the boys but this was soon broken and all but a few of the boys were transferred to this special camp, where academic teaching and manual training were provided.

“In many cases, these youths (aged from eight to sixteen) had been taken prisoner while assisting their older relations in the front line. Some had been caught in military ‘drives’; others had been rounded up and shipped out. Whatever the sentiments expressed at the time, it seems clear that these lads were a great deal better off in Bermuda than they would have been in the South African camps where the mortality amongst children was very high.”

There were 180 of these juvenile prisoners on Hinson’s Island in May 1902. The occupation was short-lived, because by August 1902 Hinson’s Island was empty, and on October 28 of that year, martial law for the island was revoked.

Compared with the Savage survey, the main feature, the ropewalk, is unchanged. The fishpond is also unchanged. A new and larger rain catch has been built, and a one and three-quarter-inch pipe is shown from the tanks to what is now called the south dock. This dock is shown as a wooden pier with steps on the east side, and with a cock for the water supply from the catch. It was to and from this pier that the Dragon and Bustler plied to bring supplies and to transport guards.

The ruin is no longer shown, but a new house has been constructed on what is now the Trade Winds property. Was the material in the ruin used to build this house, and was it the residence of the commander of the camp?

The island was divided into three areas: two for prisoners of war and one for the guard troops. In all cases, the accommodation was the same: bell-tents for both prisoners and guards. The guard troop had facilities with its overhanging latrine on the site of what is now the island’s main dock. Its area included the water catches, the house and the fishpond. The two prisoners-of-war enclosures were separated by the ropewalk, which was a sentries’ beat with a barbed-wire fence on each side.

Major Kitchener’s first move after buying Hinson’s was to try to form a volunteer air force in Bermuda, which in the days of the British Empire could have been linked with volunteer air-force reserves elsewhere, but the plan did not take on.

From its base on Hinson’s Island, three Avro seaplanes flew sightseeing trips over Bermuda. These were quite popular, and even a flight to view the Prince of Wales’s arrival by ship in October 1920 was organised, as was moonlight flying.

Major Kitchener also gave flying lessons and would take passengers, who wished to “revel like gulls at play in the free air of heaven,” on aerial acrobatic flights where he looped and barrelled his seaplane.

It was provided in the deeds to the individual lots that when fifteen lots had been sold, the owners would form a club, to be joined by subsequent purchasers of lots; and the central portion of the island, the roads and the large lot running down to the site of the seaplane hangars on the south bay, now called The Slips, amounting in all to about five and three-quarter acres, would be transferred to this club for recreational purposes. The land is now referred to as the common lands and includes the ropewalk.

By 1952 fifteen lots had been sold, and the Hinson’s Island Club was formed. At that time there were six houses on the island. Two of these belonged to Johnson: 4E, now called Pleasant View (the house built by Major Kitchener and then occupied by Johnson), and the Dew Drop Inn. Trade Winds was the residence of Captain Ross Winter, M.C.P., and was on the site of the house shown in the Royal Engineers’ Survey of 1903. This house has since been pulled down and a new house built, retaining the old name. The three other houses were Shorelace, next to the main dock, built by Herbert Zuill; Windward, now called Windsong, built by G. Orrett Whitney on the north point; and Balla Machree, built by Ford Baxter on the site of an old hut on the west shore. All the houses not owned by Johnson were on two-lot sites.

Although the club was formed in 1952, it was not until 1960 that it was incorporated by an Act of Parliament and not until 1967 that the common lands were transferred to the club.