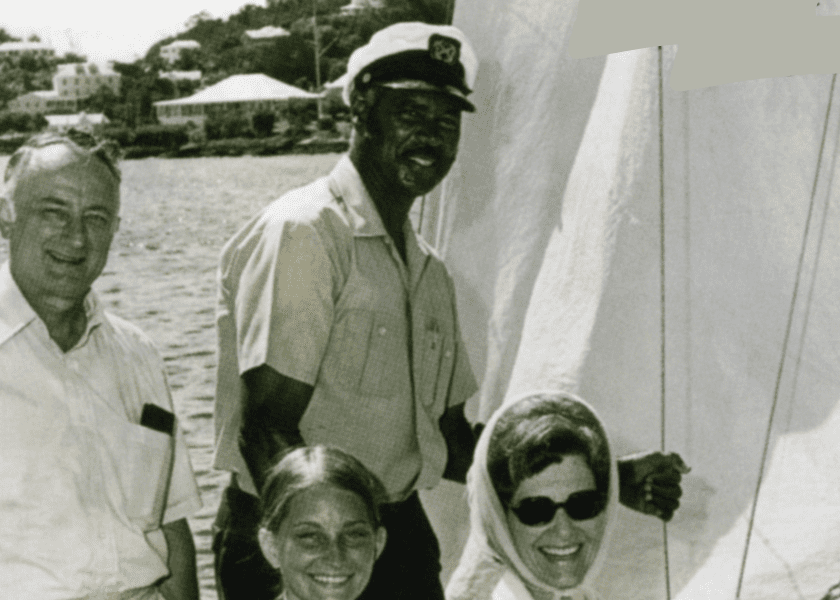 The Sea In His Blood

This article was taken from our archives. It first appeared in the April 2003 issue of The Bermudian. It appears here exactly as it did originally.

Legendary sailor Captain Edward Williams, who has sailed in 12 ocean races and survived a couple of near tragedies, wouldn’t trade his career for anything.

On a pitch-black night, June 23, 1960, the 38-foot sloop Donchery, sailing in its first Newport-Bermuda race, was within 135 miles of the finish line. The men on board included Sir Bayard Dill, who’d chartered the yacht, his son Nicholas, Bermuda governor Sir Julian Gascoigne and professional skipper Captain Edward Williams. All were confident of victory. Donchery was ahead of Finisterre, winner of the two previous Newport races. But the race had been slow going—“days of drifting in a freakish calm” was how The Royal Gazette described it. Then a storm, with winds as high as 75 miles per hour, came out of nowhere.

Suddenly, there was a loud crash on board Donchery. It was a sailor’s worst nightmare: the mast had snapped and tore away at the base. The crew—often fearing the worst—worked through the night, battling high winds and mountainous waves, to make temporary repairs, rigging a makeshift mast and setting up a radio aerial to send a distress signal. Spotted by a seaplane from the U.S. Naval Station in Southampton, Donchery was taken in two hours later by the USS Hank. Victory was snatched from their grasp. Finisterre went on to win Newport-Bermuda three years in a row.

“I have to give full marks to Sir Bayard,” recalls Captain Ed Williams, 40 years later at his home Curt-Will, which overlooks the North Shore in Pembroke West. “Being dismasted was a great disappointment and placed huge demands on the crew, but he kept us in good spirits from start to finish.” Aged 84 and six-feet-tall, Williams stands erect. His vise-like handshake elicits a wince from anyone he greets. It’s a grip that came in handy when he had a second brush with death: while sailing shipping magnate Per Lorentzen’s yacht Cornelia Marie from Bermuda to Marblehead, Massachusetts for a refit, he was nearly swept overboard during another freak storm, but managed to grab the wheel, saving himself from a watery grave.

The living room of the home Williams shares with Valeria, his wife of 60 years, is filled with memorabilia and framed family photographs. Paintings of yachts and seascapes adorn one wall. On another wall are two abstract paintings by his son, Ed. Taking pride of place on a third wall is an oil portrait of a younger Captain Ed, by Sam Morse-Brown. It is flanked by two awards: a Queen’s Certificate and Badge of Honour and a citation from the Ministry of Tourism.

His voice is clear and commanding, not surprising for a man who sang the praises of Bermuda to tourists for more than half a century, on the water, as a charter boat captain, and on land as a taxi driver.

Williams says he has been driving for nearly as long as motor cars have been in Bermuda. He bought his first taxi in 1947, one year after Parliament passed the controversial Motor Car Act. His son Ed, who spent much of his boyhood years on the water with his father, says the taxi was a great marketing tool—Williams would talk up his charter boat business to his taxi passengers, who more often than not, would book water tours. Known as the man with two hats, he says he bought his taxi in order to have a source of income during the slow season. Williams sold his fourth boat, Lady D, last year, and is getting out of the taxi business, but sailing has always been his first love.

Captain Ed with a tourist group on his charter boat Starlight

“I have loved sailing all my life, from the time I built model boats as a boy,” he says. But despite his life-long attraction to water—he played with miniature boats in his mother’s wash tub, sailed model boats in the Marsh Folly pond—he didn’t take up sailing until his late teens. His schooling at The Berkeley Institute came to an abrupt end at age 16 when he quit to help his father support the family. He worked in masonry, mixing concrete by hand for a paltry 30 shillings a week. Other mundane jobs followed. But the sea beckoned, and he found work in the boatyard of noted Bermudian sailor Bert Darrell. He gained sufficient confidence to sail alone, along with the experience that enabled him to quality for a Government pilot’s license in 1937.

During the 30s also, he followed the example of sailors Howard Powell, Earl and Henry Wilkinson, Howard Simmons and William “Socky” Adams, who plied their trade between Hamilton Harbour and Inverurie and Belmont hotels, and entered the boat charter business. He started out with a borrowed boat, and subsequently purchased his first boat Cyric.

“There were no motors, just sails,” he says. “Skippers were so skilled in sailing they could pull alongside any dock without the benefit of a motor. We were always dressed as as skippers—yachtsman’s cap, sea jacket, white slacks and docksiders—and there were no accidents.”

When the Second World War intervened and tourism trailed off, he became a pilot for the U.S. Navy, ferrying officers between the base in Southampton and Hamilton. After the war, he sold Cyric back to its former owner and brought his second boat Erma, which was later replaced by the Starlight. Making day trips to the Great Sound and Paradise Lake and night cruises—when passengers enjoyed listening to Bermudian entertainers Hubert Smith, Sidney Bean and “Big Al” Harris as they crooned “under the stars” at Inverurie and Princess—he built up an impressive list of clients. They included celebrities, businessmen, a former Governor General of Canada and British actor Sir Cedric Hardwicke. “I used to keep a log,” he says, rising from his chair in search of a leather-bound book filled with hundreds of signatures and comments.

Writes one: “He is a typical Bermudian—friendly, outward-going and with the sea very much in his blood,” while another thanks him in fine penmanship for a “wonderful day not to be forgotten.”

Williams mastered the skill of racing in the 1930s when Dr. Eugene Walker, a Bermudian who practised in the U.S., but spent summers at home, offered him his first opportunity to sail International One Design Zephyrs. He gained experience with six-meter racing from frequent Bermuda visitors and top sailors from New York’s Larchmont Yacht Club, Paul and Cornie Shields.

In 1956, he sailed with Donchery’s owner and Shell Oil president Sir Harold Wilkinson. When Sir Bayard chartered Donchery for the fateful 1960 race, he hired Williams, who by then had gained the reputation of being one of the best, to be his skipper. He went on to skipper Sir Bayard’s own two yachts, both of them named Duchess of Devonshire. While Duchess never won a race, it was the first Bermuda boat, on corrected time, to cross the final line in Newport-Bermuda 1978 and 11th overall. All told, Williams sailed in 12 ocean races, Newport and Marion, and forged a friendship with Sir Bayard that lasted until his death in 1993.

“Sir Bayard was a perfect gentleman,” says Williams, who travelled to Newport in 1994 with officials from the Royal Bermuda Yacht Club, to present the Mayor of Newport with the plate of the race, on behalf of Sir Bayard’s family and crew. In return, he was given the Newport crest. He still holds the lawyer-yachtsman’s memory dear. “I have ocean-raced with Sir Bayard since 1960 and have never met a finer gentleman and sailor,” he wrote in a journal.

Sir Bayard’s son Nicholas says: “Ed is a great friend to the whole of my family, myself, my late father, the kids. He was dedicated to his life on the sea and saw us through thick and thin.”

Douglas Fetigan, who sailed seven races with Williams and Sir Bayard, recalled: “He was just a pillar of strength. Every time I went to sea I looked forward to Ed being there too.”

The racial segregation that was part and parcel of yacht club society in those early days seems to have had no impact on Williams’ comings and goings.

“My race was never a problem,” he responds. “As Sir Bayard’s skipper I moved in and out of the clubs at will, including the Royal Bermuda Yacht Club, and was always treated with respect.” But other than the occasional Dubonnet and ginger, Williams rarely drank alcohol, so he seldom socialised at yacht club bars. At the end of a race, he was happy to make his way home. He and his wife are parents of three: Ed, and daughters Annette Gordon and Leona Scott.

Although he met his wife on a sailboat, Valeria Williams is a confirmed landlubber, who waited by the phone when he was at sea for the call to confirm his safe arrival. “I always prayed that the good Lord would take care of him and that he would get safely to his destination and home again,” she says. “Then I could relax and the emptiness would go away until he sailed again.”

Williams’ last ocean race was Newport-Bermuda in 1982, although he did boat charters until last year when he sold Lady D to retired prison commissioner Ed Dyer. Recently, he made the decision to sell his taxi. These days, he keeps busy in his garden, doing work around the house and dabbling in photography. Although the sea is never far from view, his sailing trips are confined to cruises with Valeria on ocean liners. But he has his memories.

Says Williams: “Sometimes it was tough being away from home days on end, and there were many frightening moments, but I wouldn’t trade my career on the sea for anything.”