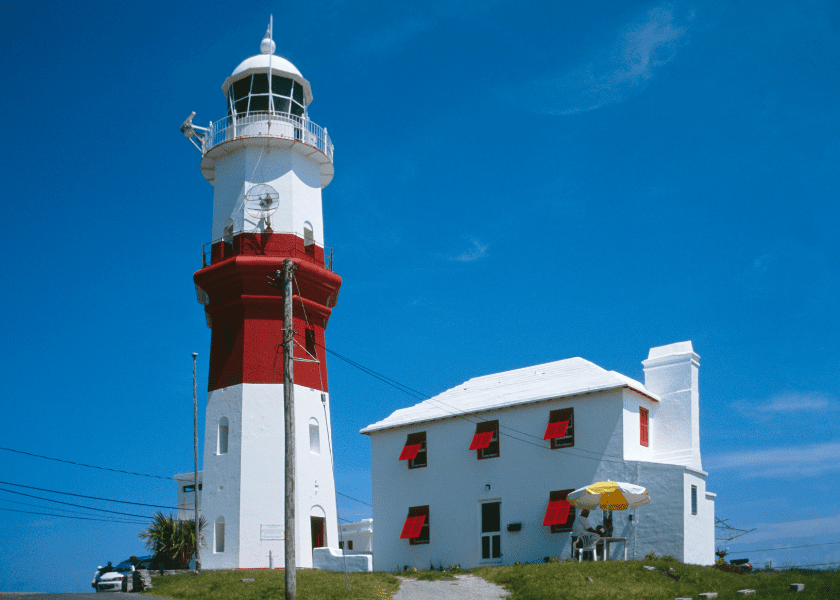 The Song of St. David’s Head

This poem was taken from our archives. It first appeared in The Bermudian in June 1957.

O, I’ve kept my watch for centuries
In every kind of weather,
Since the Olden day when galleons
Linked all the seas together.
I mark the crossroads of the sea,
I greet ships hour by hour,
And through the inky night I throw
My brightest candlepower.

Thereof I boast with seemly pride
But lack of all vainglory,
Small need to sing my praises now,
All seamen know my story;
The lookouts see my guiding light,
My oriflamme of danger,
I greet the mailboat going home,
I warn the inbound stranger.

I hail the modern racing yachts,
I note the tiny baiter,
I’ve watched the great four-funnelled ships
Out-run the nine-knot freighter.
I see the grim and ghostly hulls
Of warships in the distance
Ready to defend my shores
Or render prompt assistance.

I knew the Spanish treasure ships,
I’ve seen the pirate raiders
Scouring the ocean lanes to seize
Defenceless merchant traders.
My home-built ships I’ve watched with pride,
Barque, brig, and fore-and-after,
That traded into far-off ports
From Deal to Madagascar.

I’ve lived to see the four-day ship
In calm or gale or blizzard
Steaming nearly thirty knots
‘Twixt Sandy Hook and Lizard.
That’s going some, full well I mind
When two weeks was the limit
From Liverpool to Halifax –
It took them years to trim it.

The ships I’ve seen since time began
Would make a vast collections
Since Bermudez came and hailed my shores
They’ve come from all directions;
From all the ports of all the world
All rigs, all shapes and sizes,
Some in search of colonies,
Others out for prizes.
And once a year the hurricanes
Come by like kine stampeded.
Then out to sea they roar again
With further havoc spawning
Leaving behind a littered shore
To greet tomorrow’s dawning.

Yet in the golden summer days
With only soft winds blowing,
The lapping wavelets wash my shore,
A gentle peace bestowing.
’Tis then the memories return
Of centuries half-forgotten
When giants colonized the West
By deeds through faith begotten.

Aye, I’ve kept my watch for centuries
In every kind of weather,
Since the olden days when galleons
Linked all the seas together.
I mark the crossroads of the sea,
I greet ships hour by hour,
And through the inky night I throw
My brightness candlepower.