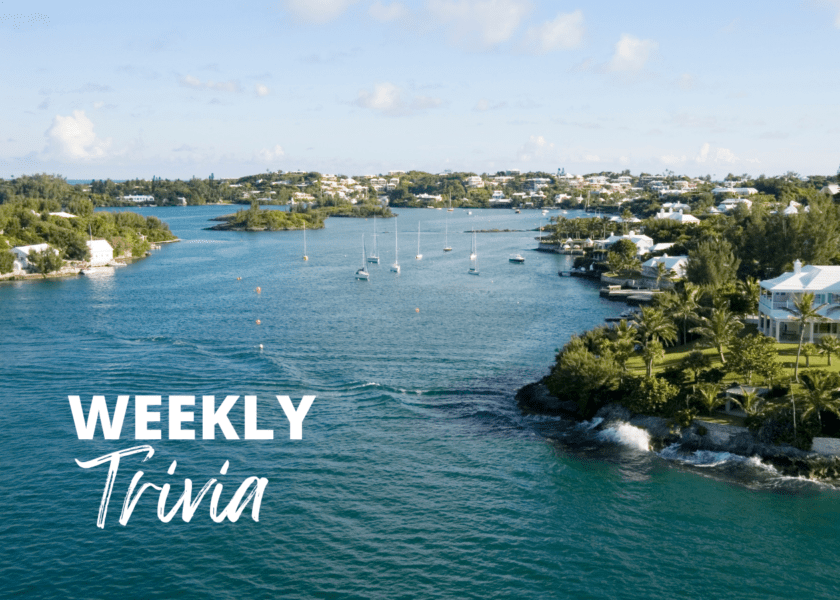 This is The Week That Was: Trivia Answers

Q: What is the highest point of land in Bermuda?

A: The highest point of Bermuda is Town Hill, with its official height being 76 m (249 ft) above sea level.

Q: Where was this photograph taken?

A: During the American Civil War, Bermuda was a staging area for blockade runners to Southern ports. Rum was smuggled into the United States from the island during the Prohibition period (1919–33).

Q: Bermuda is the only land mass located inside of which vast sea?

A: Named for its abundance of Sargasso seaweed, which provides a habitat for small marine animals in the vast, clear blue, deep ocean desert, the Sargasso Sea is a biodiversity hotspot.To learn more about this body of ocean, click here.

Q: What is the origin of the word ‘Crawl’ in Crawl Hill?

A: Many Bermudians would think that Crawl Hill received its name for the seemingly endless upward journey from Hamilton to the airport, along North Shore. The ‘crawl’ of Crawl Hill and its environs originates from ‘corral’ or the Afrikans word ‘kraal’ describing pens that held animals. From the first colonists in Bermuda, ‘crawls’ were ponds or inlets where fish caught in deeper water were kept until they were ready to be eaten. A description of how these crawls functioned in 1823 describes a process whereby the customer could select a fish from the pools and have it hauled out fresh and on-demand. There are records of fish ponds on ‘Craule Point’ as early as 1623.

Week of October 3rd to 9th:

Q: Who does the Governor rent the State House to in exchange for one peppercorn a year?

A: The Peppercorn Ceremony is an annual event held in late April in the town of St. George’s. Each year since 1816 (and with much pomp and circumstance) the Freemasons have handed over one peppercorn to his Excellency the Governor in exchange for use of the historic State House.

Q: Who is the actress pictured above, and what movie did she star in that was filmed in Bermuda in the 70s?

A: The magnificent Jacqueline Bisset starred alongside Oscar-nominated Nick Nolte, in The Deep, which was filmed in Bermuda in 1977. The film tells the tale of two amateur treasure-hunting divers who have a run-in with local criminals when they discover the lost cargo of a World War II shipwreck.

Q:What was the name of the ship that ran aground just off Elbow Beach during a hurricane in 1915?

A: The Pollockshields ran aground just off Elbow Beach during a hurricane in 1915. As the ship began to sink, Bermudian whaler, Antonio Marshall got in his rowboat and began to make his way out to the ship to help rescue the crew. While this happened, guests staying at the Elbow Beach Hotel watched with bated breath as the dramatic rescue took place. Sadly, the only person unable to be rescued was the captain of the ship who died while attempting to secure a life jacket.

Q: What does local lore claim about Wreck Hill in Ely’s Harbour?

A: Local lore claims that bonfires were lit deliberately on the top of Wreck Hill to mimic the presence of a lighthouse, in an effort to lure ships into the shoreline where they would eventually wreck onto the northwest reefs. Once it was evident that the vessels and crew required assistance, it is believed that locals generously came to their rescue, and even more generously helped themselves to lucrative goods on board. As William Sydes pointed out in his book ‘Account of Life on the Convict Hulks’, “If a vessel is on the rocks, all the fishing boats make to her, weather permitting, to see what they can purloin. They rejoice as such misfortunes, and call her a “turtle in the net”, and all they try is to cause a confusion in the ship, so as to get a load and off.”

Q: Why is Bermuda’s sand pink?

A: Bermuda’s characteristic pink sand is all down to one little invertebrate – the red foram (Homotrema rubrum). Like many sea creatures found in Bermuda, such as sally lightfoot crabs and West Indian top shells, red foraminifera take in calcium carbonate from seawater and use it to construct hard skeletons.

The red foram is an amoeba-like organism, with a gelatinous body that is very vulnerable to predation in the ocean. So that it doesn’t leave itself so exposed, the red foram builds its own home – a small, red, spherical skeleton, which they fix to the rock. These little “casks” are the red fragments you can see if you pick up a handful of Bermuda sand.

Our parrotfish play a big role in getting red foraminifera off the rocks. They eat algae that grow on bare rock surfaces on the reef, and every time they scrape algae off of the rock, their powerful beaks take a little limestone with it. Red foraminifera are frequently caught in the crossfire, and later excreted along with limestone sediment by the fish.

Q: What is symbolic about Bermuda’s national flower, the Bermudiana?

A: Part of the Iris family, Bermuda’s national flower, The Bermudiana has a small, very distinct purple flower with a bright yellow centre. Endemic to our island, the Bermudiana is said have emerged from the ashes of Sally Bassett, an enslaved woman who was burned at the stake for allegedly trying to poison her enslavers. Sally Bassett declared that there would be a clear sign after her death that she was innocent and we are reminded of her each time our national flower blooms.

Q: What was the original name of Devonshire Parish?

Q: Can you name this iconic cruise ship that operated from New York – Bermuda before and after World War II, until its final voyage in 1966?

Q: What environmental disaster did Bermuda face in 1945?

A: In 1945, Juniper Scale insects were found living on numerous cedar trees across the island. Within three years, the scale had infected every tree in Bermuda. Despite efforts to halt the advance of the scale, from mass spraying to importing beetles, 90% of Bermuda’s cedar tree population perished within a decade. By the 1950s, the government was felling more than 13,000 dead cedar trees a year. To read more about the demise of Bermuda’s most iconic tree, click here.

Q: What famous explorer made history by descending into Bermuda’s deep ocean in a bathysphere, further than anyone had gone before at the time?

Q: Who introduced cricket to Bermuda?

A: The game of cricket was introduced to Bermuda by British soldiers stationed in St. George’s and members of the Royal Navy at Dockyard. The first recorded cricket match in Bermuda was played in 1846 between British servicemen. Bermudians, and black Bermudians in particular, fell in love with the game.

Q: In 1953 the grounds of Fort St. Catherine doubled as a stage for the performance of which theatrical play?

A: In 1953, an open-air production of Shakespeare’s tragedy Macbeth, was performed here starring Academy Award-winning actor, Charlton Heston as the title role. The performance, directed by Burgess Meredith, involved a variety of daring theatrics. According to Heston’s biography, during the first performance of Macbeth in Bermuda, his tights caught fire causing serious burns to his legs.

Q: Most sailors commonly refer to the Newport Bermuda race as which nickname?

A: The Newport Bermuda race, which is the world’s oldest regularly scheduled ocean yacht race adopted the nickname “thrash to the onion patch” by the sailors who raced it. Writer-sailor John Rousmaniere once wrote, “There’s poetic justice: after several long days of discomfort in a closed and pungent cabin, the boat finally arrives at the historic home of a famous pungent vegetable.”

Q: The first organised attempt to make a profitable industry out of Bermuda’s soil was in 1616, with the cultivation of what crop?

Q: What two famous visitors to Bermuda (one a famous author and the other a former U.S. president) were responsible for drafting a petition against automobiles on the island, which resulted in a ban of all motor cars in 1908?

A: Mark Twain and Woodrow Wilson frequently visited Bermuda to escape the hustle and bustle of life on the East Coast. As the world started to become more modernised around them with the introduction of vehicles to the United States, they drafted a petition against the use of motorcars in Bermuda out of fear that it would ruin the peace and quiet of their tranquil getaways. The pair gained support from 111 tourists who signed their petition, and the Assembly actually passed the Motor Car Act of 1908, banning motor cars on the island until 1946.

A: The original name for Front Street was Water Street.

Q: In what year did Bermuda’s first marathon derby take place, which later evolved into the traditional May 24th fixture?

A: The first official running of what would become the May 24th marathon took place in 1909, when a group of British soldiers challenged local islanders to a race.  Unfortunately, the Brits took the win, with Private Jordan, of the Duke of Cornwall Light Infantry placing first and Bermuda’s own, John C. Bean finishing second. In true Bermudian spirit, the locals proposed a rematch with a 13-mile route starting from the Princess Hotel in Hamilton to Somerset the following year. The race subsequently became an annual May 24th fixture around 1928.