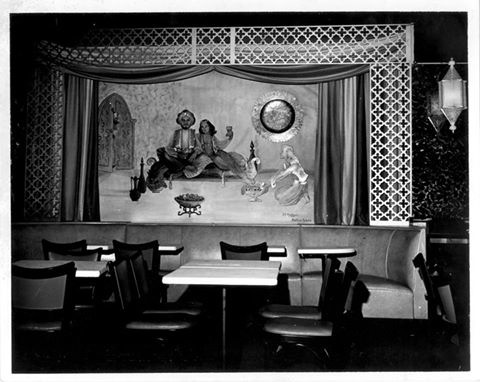 Vintage Clubs of the Glory Days

How many remember dancing till dawn at the Guinea Discotheque? Or sipping cocktails at Ace of Clubs? During a time when baby boomers were coming of age and new technology was being embraced, Bermuda’s nightclubs were packed and it was common for popular bands to play six nights a week. Here we revisit some of Bermuda’s best and most happening spots from way back when.

The Guinea Discotheque was situated where Barracuda Grill is now, above Hog Penny on Burnaby Hill. Taking it’s name from the Guinea coin – which was generally worth around 21 shillings then but had been out of circulation since the 1800s. The Discotheque (as it was lovingly referred to by the regulars) was a restaurant called The Golden Sovereign by day, which would close promptly at 10:00pm before reopening as The Guinea Discotheque at 11:00pm.

It was small and intimate and its décor shadowed the Victorian era. Most noteworthy was the pale gold wallpaper enriched with deep burgundy flocking. All seating was of faux burgundy leather and mahogany wood, including a banquette that ran along the eastern wall. There was even a beautiful mahogany buffet, replete with mirror that many would sit on when the house was packed, which was often!

Lighting was soft and warm and emanated from frosted glass globes strategically placed around the walls, all of which added to intimacy and romance.

It was common for the dance floor at The Discotheque to be fully occupied all night long, which was aided and abetted by local acts such as The Savages (comprising of Jimmy O’Connor, Howie Rego, Bobby Zuil and Paul Muggleton) and The Warren Experience. Mrs. Barbara Hooper was the disc jockey and played all the hits of the day.

40 Thieves Club was an upscale nightclub that brought in many of the big named stars (some of whom were just starting out) such as Aretha Franklin, Dionne Warwick, Louis Armstrong, Duke Ellington, Cilla Black, Tom Jones, The Drifters, and Ben E. King.

Located on the second floor of the building between what is now Docksiders and the Courts, it consisted of a very large room filled with cocktail tables and seating, bar, dance floor and stage. Its perimeter walls were painted in beautiful Ali Baba-like murals that were exquisite.

During the late 1960s and ’70s, the Bermuda Strollers entertained the crowd and were often the principal group during College Weeks.

El Matador opened late in the evening. It comprised of one room with two-levels — the bar being on the first level at the bottom of the steps. The Gents played there every night and also backed up various singers, such as Rudy Ford and Bishop Caines. It was a place known for giving new talent a start. Often when Rudy Ford sang the song “Gimme Money”, the clientele would throw money up on the stage and Roddy Marshall would quickly go out on the stage, broom in hand and sweep it up, adding humor to the evening.

A gentleman named “Sammy Dick” was the club’s doorman who would stand at the entrance and dressed in a variety of costumes – such as a pirate or cowboy – and was loved by everyone, including visiting college kids.

Roger DeSilva ran the establishment and when it closed, he then launched the Ace of Clubs.

Ace of Clubs was on the corner of Front and Parliament streets, above what is now known as Bermuda Bistro at The Beach.

It consisted of two rooms one with a small semi-circular stage topped with a Bermuda roof, dance floor, bar and seating, and a second room with additional seating and bar, in which the walls were beautifully and tastefully illustrated with a mural of nude women. Groups such as The Gents and Our Cousin Dead were the house bands.

Chrome Balloon was located where L’Oriental is now but the entrance was on Par-La-Ville Road by the kitchens.

Opened in the late 60s, the Chrome Balloon was the first club to have a light show, which took place in a projection room. David Williams and Rick Morbey sat at an overhead projector where they’d pour a small amount of food colouring on the surface of its glass, so its image was then projected on the wall, stage and dance floor. To make it more psychedelic, they would place a piece of clear plastic over the food colouring on the projector’s glass and lift it up and down to the beat of the music, causing the image’s colours to dance all around the club.

The Club — after the Chrome Balloon closed, it morphed into The Club as a disco and featured strobe lighting.

Musicians’ Club was located on Brunswick Street, across from Dellwood Institute. It opened after 3:00 a.m. and was dedicated to serious musicians who at a moment’s notice, would sit in on jam sessions.

It was underground, small, dark, very smoky and smooth-jazz filled the air. It was atmospheric and unique — no other club in Bermuda compared with it.

Time Tunnel — Being situated in the Gunpowder Cavern, St. George’s, it was quite an experience and well-worth the journey East! Because the room was so cavernous and without carpeting, the music burst off its walls and ceiling making it almost impossible to have a conversation. No décor was needed, as the fort itself and the music was the atmosphere.

Rum Runners — ’70s. It too was a restaurant, but following dinner, it was taken over by young people looking to meet up, drink and have fun both on and off the dance floore. As one can image by the name, the décor at Rum Runners was synonymous with Bermuda’s seafaring history.

The Hub was downstairs at the Southampton Princess. It was a great place for dancing — no live music but they played all the hits of the day on a super loud sound system. It had a large lighted dance floor, that was smooth and great for dancing.