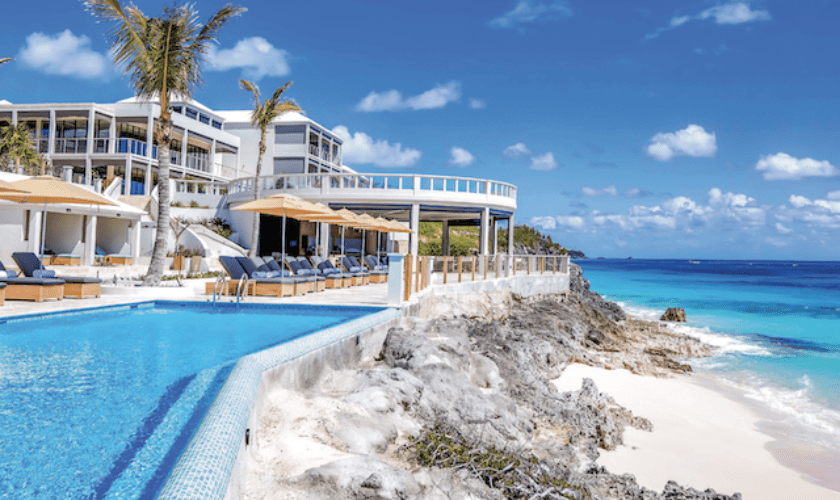 Welcome to The Loren

As an international businessman living and working in Bermuda over the last five years, Stephen King was keenly aware of the missing link in local accommodations. No hotel was just right for the modern, high-end tourist and none quite fit the bill for businessmen like himself. “I thought Bermuda could do with a property like this,” said King, during The Bermudian’s personal tour of his newly opened hotel, The Loren at Pink Beach. “It certainly was missing for me and my colleagues that were flying in.”

With an office in Hamilton and a house at Tucker’s Point, King drove across the old Pink Beach property on a daily basis. He was struck by the beauty of the site and could see the possibilities for the kind of property he had in mind for his first hotel development. A brief phone call was all it took to start the project rolling. “I just picked up the phone to Bank of Butterfield and asked if they still had the loan on that property,” King said. “On December 23rd I phoned the bank, and on the 24th we paid a several million dollar deposit.” By the following February, all concessions had been negotiated with government and design began shortly thereafter. Three years later, this past February, The Loren at Pink Beach officially opened its doors.

With the discerning tourist in mind, The Loren was designed to be a first-class resort in every way. The lobby itself is a masterpiece in contemporary design. The sleek check-in desk is tucked to one side so as not to obstruct the glass walls that showcase the expanse of ocean the site is famous for. Walls are charcoal grey and retreat from view as King’s personal modern art collection enhances the space. To the right, an impressive, floating spiral staircase leads down to the bar and restaurants below while a sitting area features a fascinating variety of textural décor to enjoy while waiting or relaxing.

“In terms of its aesthetic look, I wanted it to have elements of traditional Bermuda, which obviously has to happen, but we wanted to clean it up a little bit and add a bit of a European feel to it,” explained King.

The entrance to The Loren at Pink Beach

Immediately past the check-in desk, and highlighted by a custom-designed rug featuring the map of Bermuda, an art-lined corridor leads to the eastern section of the guest suites while a covered walkway to the west leads to the other. The 700-square-foot rooms are sophisticated and modern with large, private balconies that all face the spectacular south shore views. The spa-like, five-piece marble bathrooms are impressive in size, detailed to the finest quality and naturally filled with luxurious linens and bath products.

A collector himself, King felt the art throughout the hotel was important to the overall aesthetic, and his passion for the island’s outstanding ocean views influenced the pieces chosen for the rooms. “Bermuda to me was always about its views. Its coastline is absolutely gorgeous,” he said.

The view when looking down over the pool and ocean beyond.

“A friend of mine from Miami and I started talking about what kind of art we wanted to do in the rooms as art played a big theme throughout the hotel.

“We commissioned him (he is a photographer) to go out and get various shots of Bermuda’s coastline, then we created this diptych, mirror image idea that we printed.

“Like the whole building, there is symmetry between the natural landscape and the build environment. We wanted to create this idea that you look one way in the room and you’ve got a synthetic representation of the coastline and you look the other way and you’ve got the real coastline.”

Aside from room service, of course, the hotel features two dining options—the Marée restaurant (French for “tide”) with its refined European style and high-end seasonal cuisine, and the more casual Pink Beach Club. The latter was built as a rotunda, with a flat roof, which functions as ideal entertainment space—and will no doubt soon be a preferred wedding location as it looks out over the vast ocean and to the pool and beach areas below. Designed without exterior walls (only columns) facing the ocean, the restaurant can be completely open on a perfect day or subtly enclosed and protected from high winds, rain and heat with hurricane-proof, translucent screens, custom designed and finished specifically for the hotel.

One of the 700-square-foot rooms

Other amenities include a spa, a gym, a kids’ room, a boutique, two pools, a private meeting/dining room in the lobby and another on the rooftop and, of course, the hotel’s own private beach.

A clear design decision for the hotel is the intentional density of the property. Nestled into the hillside with the back-end operations completely underground and all guest areas interconnected and covered, The Loren was designed to maximise guest satisfaction by facilitating easy access to all areas of the hotel regardless of weather conditions, while also being efficient for the management.

A hallway runner features a custom made map of Bermuda design

“We did not build a small hotel, but we wanted it to be tight and we built a lot of it underground,” said King. “The operations are all under the hotel. You can get from every room to every room by the staff elevators and the tunnel. You will never see a truck pulling up to the entry with deliveries because they come up the front and disappear down to the far end of the site, and then literally the golf carts can drive under the hotel right to the kitchen. So that was very important to us to improve customer satisfaction and not have to cause guests to deal with the elements—particularly in the off-season.

“The weather is very variable here—one day sunny, one day windy, one day cold—and people have less time in some ways than they used to have. You want to arrive, get to your check-in, get to your room, get to the spa or gym for a quick workout, get your meal, hit the beach, see the ocean, then get back in the taxi to go to your meeting. It needs to be more dense for the u
ser and it also needs to be dense with the labour costs here on the island.”

The bar and lounge

Along with containing costs, the builders were also concerned with being environmentally conscious throughout the project. The rubble from the original Pink Beach property was used in the building of the hills, and sand was dug out to use for concrete. The main hotel was built further up the hill from where the original cottages were situated and therefore the oceanic reserve below was able to be restored as much as possible. Available land was also used to grow many of the plants now situated throughout the property. “We didn’t try to do a LEED certification or anything but we were extremely conscientious about what we were doing environmentally,” said King.

Completely involved in the design and development process throughout, King chose to surround himself with a team of talented architects and developers to bring his vision to life. But it was not an easy road as protectionist ideologies and red tape first needed to be overcome. And while he had significant support for the venture, he also faced criticism from those wanting to protect local jobs in the process.

“I recognise the need to protect the locals, but when you are trying to be progressive like this you want to import some of the skills for operations, design and construction. Someone in Canada or the United States or the UK has done this 50 times. We need that expertise.

“Protectionism slows down progress. If you capped out that you can only use locals for the food and beverage or the hotel management or the design, then the problem is you can never upgrade with the rest of the world. You need a little bit of that to be allowed in because otherwise you will never develop. That goes for all industries all over the world.

The roof of the Pink Beach Club restaurant was created to be an ideal function space.

“You have to allow some import of overseas expertise so that you upgrade and modernise—but alongside that there is an enormous amount of capability on the island. The net result is the place was built by locals…We created an enormous number of jobs throughout this process. I would never choose to do a development on [other Caribbean islands] because the infrastructure is terrible, but here you can have a Category 4 hurricane and be back up and running in a few days. Last year everyone was back to work building the next day.”

Along with the main hotel, the owners were given the right to build seven residential units for sale or rent on the property. Thus far three units have been built and as they start to sell, then the other four will come soon after. Of course, objections came and the developers were questioned as to why they didn’t just build a 200-room hotel instead. “Because it would lose money and I would not do it,” King explained. “We’ve got to get to a point in Bermuda where people view investment in the island not as passion but as profit. You are supposed to make money when you invest. Everyone seems to think that they should do it because you love the island. I do think the island is great but you do have to make money.”

The Pink Beach Club restaurant has open sides and a casual feel.

King’s keen understanding of what it takes to be profitable, alongside the knowledge of what his intended market (“the top 20 percent of the top 20 percent of high-end tourists”) desires, influenced every aspect of The Loren’s design and will ultimately be the key to its success.

“The tourists are changing…What are people coming here for?” asked King. “We built this for the views, food and business— come for your meeting and bring your family. Come and have a cocktail, listen to some good music, enjoy the beach regardless of the weather—that is what we were trying to create at The Loren.”

The view when looking up at the hotel from the pool.