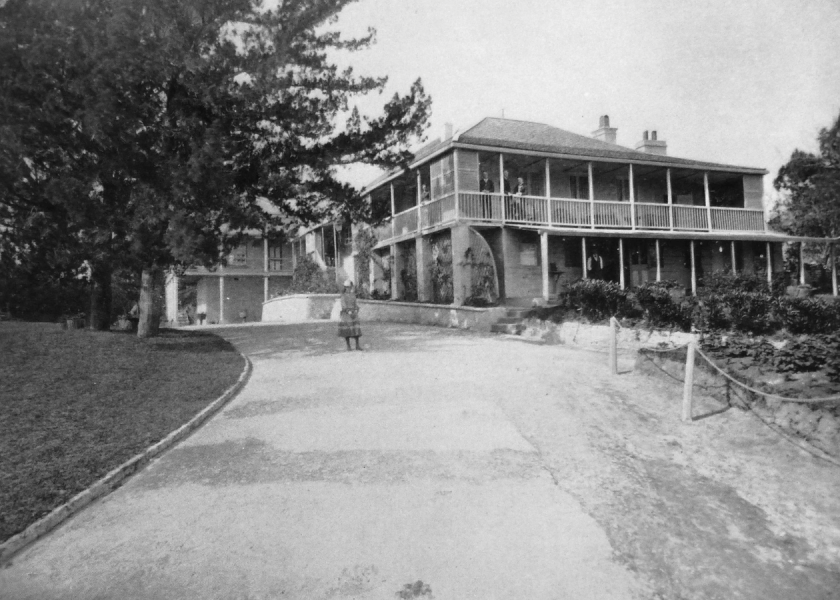 With Halloween on the horizon, we explore some of the island’s most notoriously spirited places and spaces, including a private home occupied by a ghost who makes a bait of answering the telephone.

The late author of Bermuda’s Favourite Haunts, “Mac” Musson, and the rest of her family left Winton relatively unscathed after staying there just eleven months from December 1964 to the following November. “We just couldn’t get any sleep at night,” she once told Bermudian writer Thomas Vesey. “Even after the first week I began to notice something, though I didn’t believe in ghosts when I first moved in. There were sudden temperature drops in the house—even in the dining room—which couldn’t be explained away as drafts.” And then she heard reports of people seeing eerie lights drifting up and down the stairs and the story of the woman who glided through the dining room. She began to be a bit concerned when her son was awakened one night by someone tapping on his shoulder. There was no one there. Then, looking around the room, he made out the misty shadow of a woman standing at the doorway, and as he watched, it faded softly into the darkness.

What is more, the ghost has been known to answer the telephone. On one occasion Musson was expecting a call from Sister Jean de Chantal of Mount St. Agnes. The phone rang but when Musson’s daughter answered, there was no reply. Shortly afterwards it rang again: a startled Sister Jean was on the phone with an astonishing tale to tell. She said that when she had dialed a couple of minutes before, an unfamiliar voice answered. “Is this Winton?” asked Sister Jean. She was told clearly that it was. Yet she was told that neither her sister nor her niece was at home. Puzzled, Sister Jean hung up and tried again. This time her niece answered…yet there was absolutely no one who could have answered the phone earlier.

Through many generations of bewildered Winton residents, the legend has been passed down that the ghost is that of Kitty Love Dill. The wife of Captain Thomas Dill, Kitty lived in the house over two hundred years ago. There are many strange tales told of this remarkable woman, and at least half a dozen involve her seeing a wraith—the image of a person immediately after their death. One night she awakened to see her son, a sea captain like his father, standing clearly before her. Water was dripping from his hair, and he vanished soon afterwards. It later transpired that his ship, and all aboard her, had been lost.

But do not be afraid, for it’s not you she’s looking for. According to Bermuda’s Favourite Haunts, the ghost is the wife of one of Bermuda’s earliest governors. After suffering a lifetime of both physical and emotional abuse at the hands of her husband, she remains on the property, looking for him and ready to make him pay.

It was a warm day, and the couple were taking in the history and architecture of the grand city church. After a while, the husband decided he wanted to take a look around the grounds. When his wife finally joined him, she caught him deep in conversation with a wall! She approached her husband and suggested to him that perhaps it was time to go, worried that Bermuda’s heat and humidity had exhausted her husband to the point of delusion. On the contrary, her husband was elated to introduce her to his new acquaintance, a gentleman who told him he was working on restoring the cathedral after a fire that took place in 1892, almost one hundred years prior.

It seemed that the same man appeared to the first curator of the Trust, Lillian Fox, when she was doing some light cleaning in the attic. While she noted that the figure was not clearly defined, she was sure it was that of Spencer Joell who had resided at the house until the 1940s.

From the moment they arrived they encountered an aura of hostility, and before long were encouraged by the atmosphere to hold a Ouija board session. This turned out to be more than just a diversion when repeatedly the Ouija board appeared to be working. Finally, they decided to take notes, and in this way every letter spelled out on the round polished dining room table was faithfully recorded. Though the words and letters were very much jumbled, they managed to make out occasional sentences. This enabled the Americans, who had no knowledge of Bermuda’s history, to establish that they had made contact with a female from the eighteenth century. When they asked her why the house had such an atmosphere of unease, she revealed through the board that an enslaved man had been horrendously tortured and consequently had cursed the house and all who lived in it.

One of the strongest proofs that the Ouija board contact offered was this: the man had taken what she called “de shinnies” (an early term for jewellery), and as a result his right hand was thrust into a lime kiln. She even revealed the location of the kiln at the southeast corner of the property. The drama group, along with the estate agent for the property, went to the southeast corner and found nothing but a flat lawn. When they dug a few feet, however, they came across the remains of a lime kiln. During the rest of their stay of several months, the occupants were never again able to bring back the female they had contacted.