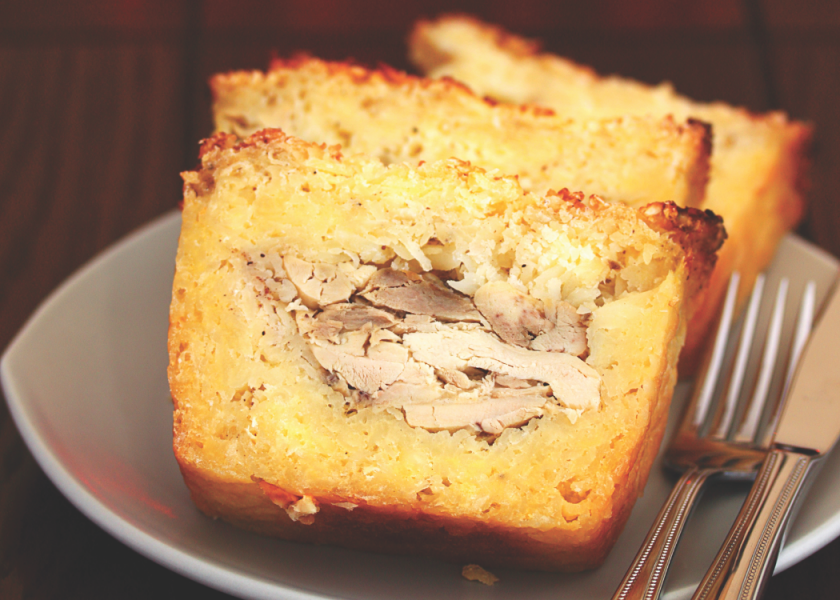 When people talk cassava pie, you know Christmas is coming. We all have our special recipes (adapted over generations) of the sweet and savoury dish and in old Bermuda, making the pie was a Christmas ritual in the same way as going to the parish church on Christmas morning.

Cassava is root stock. Its roots are farinaceous and fusiform, sometimes attaining a length of three feet and a weight of twenty or thirty pounds. Its sap contains hydrocyanic acid and being therefore highly poisonous, the root cannot be eaten in its fresh condition.

In Bermuda, though cassava grows well and yields its yearly crop unstintingly (the root is dug in December and the stalk may be planted again in January or February), no commercial use has ever been made of it. The reason may be that the deep soil preferred by cassava is relatively scarce here; on the other hand, arrowroot, also a tubular root, was once grown here in great quantities and was once one of our main exports. However, in many backyards and kitchen gardens today you still see small patches of cassava growing. The bushes—for the plant will grow to bush-like proportions—are allowed to wave their small shiny fan-shaped leaves in the air for one year before their roots are dug up to make Christmas pie for the family.

In 1621, the Reverend Lewis Hughes wrote about cassava in A Plaine and Trve Relation of the Goodness of God Towards the Sommer Ilands. “The Casaua roote,” he wrote, “is like to proove a great blessing of God unto you, because it makes as fine white bread as can be made of Wheat, and (as I am persuaded) wholsome, because the Indians that live of it, are tall and strong men.”

As Susette Harriet Lloyd relates in Sketches of Bermuda: “The new year [1831] was ushered in by the disastrous death of a number of unfortunate pigs, which were poisoned by drinking of the water in which cassava had been washed. With their fate before my eyes, would you believe that I ate a large plate of cassava pie at dinner!”

She lived to survive the tale, but three years later as reported in the Royal Gazette (October 14, 1834) one poor little girl did not. After eating some bitter cassava, she died, despite being given castor oil as an emetic. Two boys who had eaten it at the same time did survive thanks to “copious doses of whale oil.”

Traditionally, the pie was made on Christmas Eve or even Christmas morning. Now that people have freezers, the pie is often made in advance, frozen and cooked or reheated on Christmas Day. The leftovers are often warmed in a frying pan for breakfast on Boxing Day and many days following.

The preparation of the cassava root used to be a tedious and messy task, but you can now buy frozen grated cassava which has to be thawed overnight before making the pie. Farina (dried ground cassava) is also popular these days. If substituting farina for cassava in a recipe, use only half the amount. This is because liquid added to the dry farina brings it to the same consistency as fresh cassava—about 4 cups of liquid are required (half cold water and half evaporated milk) per pound of farina. Stir and leave for at least an hour or overnight for all the liquid to be absorbed.

“The making of the pie is one of the whited-sepulcher-type things that you let your mother or grandmother or maiden aunt make until they have one foot in the grave and you are forced into it,” she wrote. “The only person I know to take the bull by the horns before she had to do it is That Woman Called Intrepid, Mrs. Stephen West, who came to terms with cassava as a new bride (American at that!).

Before signing off, she reassured her daughter-in-law: “With your skills, my hints and the enclosed recipes, future generations are assured delicious and traditional cassava pie at Christmastime.”