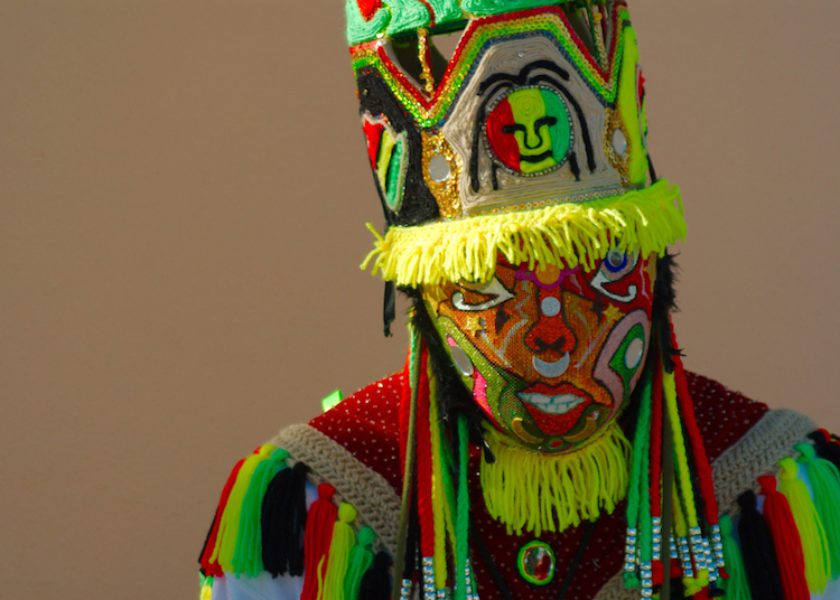 Standing at the pinnacle of Bermudian cultural expression and tradition are the Gombeys. Their drumbeat and dance are instantly recognisable and universally accepted, and adored, as a unique representative of our Island’s heritage. They are exotic in a place sometimes known for being staid, polite and even a little boring.

And there in lies the irony of the Gombeys as a symbol for Bermuda. They are born from and remind us of a sinister and unresolved chapter in our history – enslavement and the social and economic oppression of black people that followed it.

Were the tensions of race relations not so ubiquitous in local life the Gombeys could indeed stand as a national symbol of resolution and respect. Instead their adoption into the mainstream suggests we’d rather wear a mask of unity than tread the path to equality.

This is not to suggest that the Gombeys cannot be appreciated by all who live or visit here. How they are appreciated, and more importantly respected, depends on recognising them as a living embodiment of a struggle that continues to this day.

Much like Cup Match, the Gombeys do not completely belong to all of Bermuda. That the tradition has not only survived but transcended the forces it once resisted speaks to the spirit and perseverance of black Bermudians.

There is no other tradition that has remained intact for so long during our history. It has been handed down from generation to generation, retaining its authenticity and continuing to serve its original purpose – an expression of humanity and freedom of spirit in the face of unfathomable cruelty and indignation.

Writing for the Smithsonian Institution’s Centre for Folklife Cultural Heritage, Ronald Lightbourne interviewed Allan Warner, the Captain of Warner’s Gombeys, who explained that some of his troupe’s dances “are freedom dances, wherein dancers celebrate an absence of shackles and chains on the limbs.”

In that context, the unbridled enthusiasm and energy of both the dancers and the drummers takes on new meaning. Furthermore the dances, which exhibit a flowing sense of improvisation, are actually choreographed with militaristic precision and discipline and visually depict stories of inspiration and freedom.

For example, Mr Lightbourne explained that the Warner Gombeys express, as African stories, themes such as, ‘Johnny and His Spear’, ‘Sampson and Delilah’, and ‘Daniel in the Lion’s Den’. Other stories, he wrote, depict the Hunter’s Return and pay homage to the earth and sky.

The originations of the Gombey, like so many Bermudian traditions, are lost in the shrouds of undocumented history.

That said, it is commonly understood that the tradition emerged from the African and Native American cultures of Bermuda’s enslaved peoples.

Interestingly, those enslaved persons existed in relative isolation. As early as 1676 a ban was placed on the importation of enslaved people, leading to a black population that was largely Bermuda born. This ban, by the way, was not a reaction to the abhorrent nature of enslavement but rather to limit the number of black people on the island.

Historic references to the Gombeys date back to at least the 18th Century. For example, the Bermuda Legislature banned Gombey dancing in 1761 as a reaction to a conspiracy to revolt.

Post abolition Bermuda saw an increase in immigration of black people from the Caribbean, particularly in the late 19th and early 20th Centuries, and they would surely have brought similar traditions that would have influenced the Gombeys.

Historians also surmise a British impact, which can be found in the military style of drumming. How or why this happened is unclear but it could simply be the proximity of blacks and whites in Bermuda and availability of instruments.

Either way the Gombeys developed a unique style of drumming, dancing and story-telling that can be found nowhere else. Amongst the island’s Gombey troupes there is variety that has emerged in different parts of Bermuda and through different family traditions.

Still, there are core components to a Gombey troupe and while the size of the troupe can range from 10-30 members it is usually a much larger event as the following crowd is, in fact, integral to the proceedings.

The costumes cover the Gombey from head to toe with bright, colourful tassles, a cape, a towering peacock-feathered headdress and, of course, the mask, which hid the identity of the dancers from their owners.

The Gombey’s weapons, the tomahawk, shield, bow and arrow and whip, reflect the Native American influence and also convey the spirit of resistance.

The troupe consists of a Captain who, through the commands of a whistle, directs the flow of the dancers. There is also the Wild Indian, the Trapper and Chiefs and Warriors. The dancers range in age from adults to small children and while traditionally an all male spectacle, more recently there has been an all female Gombey troupe.

The drummers are the life beat of the dance and they play a Mother drum, which provides the main beat, side drums for the rhythm, and snare drums, which according to Mr Lighbourne often engage in call and response patterns while striking both the rim of the snare as well as the skin. He described the result as “an exhilarating, intoxicating, rhythmic mix which provides the impulse for both the dancers as well as the followers.” Anyone who has witnessed the Gombeys would surely concur.

Traditionally the Gombeys marched the streets on Boxing Day and New Years Day.

Today, Gombeys are a staple of local events and have also captured the imagination of spectators when performing overseas. They are an ever-present symbol for marketing Bermuda and provide excitement and mystique to tourist activities and events.

Their appeal to visitors and foreigners as an exotic and mesmerising local custom is easy to understand. The driving beat, sharp whistle, moving mosaic of colour and the relentless energy of the dancers make passive observance impossible.

For the locals there is a much deeper significance and connection to our past, present and future. Through understanding and respect the mask may one day fall away leaving only the unique and enduring drumbeat and dance of Bermuda.