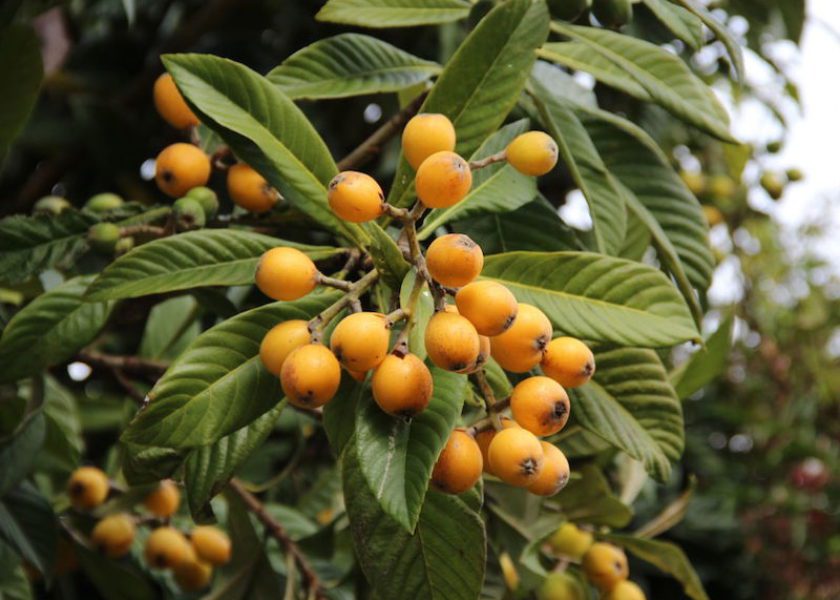 There is a monument on the grounds of the Cabinet Office dedicated to the man who introduced the Loquat tree to Bermuda. Governor William Reid (1839-1846) left behind a number of significant achievements from his time here, including encouraging the development of local agriculture, building Gibbs Hill Lighthouse, founding the first library and pushing for universal education in post-abolition Bermuda.

But one wonders, considering Bermuda’s continuing love affair with the Loquat, if sending a packet of Loquat seeds from Malta (where he was posted at the time) would have been more than enough to justify the title of “The Good Governor”.

To this day, starting sometime in mid-February and continuing as long as possible, Bermudians young and old can be found standing on the side of the road munching on the sticky sweet fruit of the Loquat tree.

For a country where daily life is essentially suburban, or even urban, the Loquat tree stands as a reminder of the bounty of Mother Nature, a chance to stop, reach up and savour the moment.

Growing up we had a Loquat tree at the bottom of our hill. The tree served as both a landmark for directions to the house and a meeting place for the neighbourhood kids. We climbed it, hid from our parents in it and hung out in its branches devouring the fruit and throwing the seeds at each other.

Today, the Loquat continues to thrive and provide refreshing sweet relief for winter and spring walkers along our highways and byways. And while there is no formal farming of the trees, the national bounty is harvested, one family at a time with the tender yellow fruit put to an abundance of good uses.

A quick search of “loquat” on The Bermudian website reveals a beguiling list of culinary and alcoholic recipes.

And that is all before fermenting them for wine or soaking them in alcohol to make Loquat Liqueur. There is an official Liqueur called Bermuda Gold, which was made by the Somers Company and is now produced Gosling Brothers Ltd., but a lot of people just make there own, and its tasty. The fruit provides the sweetness while the seeds imbue a flavour reminiscent of Amaretto. In Italy they produce a liqueur from just the seeds called Nespolino.

One note of caution is that the seeds are slightly poisonous and release cyanide when digested. Although you’d have to eat an extraordinary number of them to reach dangerous levels, this is still something worth considering if ever embarking on the production of Loquat Liqueur (or Nespolino!).

Loquats have even become a national icon, their dark green leaves and pastel yellow fruit fit comfortably within the Bermuda colour palette and often show up in the work of artists or printed on local souvenirs like dish towels and cutting boards. What’s cool about this is how far loquats came to get to Bermuda in the first place.

Loquats (Eriobotrya japonica) originated on the other side of the planet, in China, and have been cultivated in Japan for over 1000 years (today Japan is the leading producer of Loquats). There are over 800 “cultivars” of Loquats in Asia and they can be found around the globe, growing easily in sub-tropical and mild temperate climates.

Given the amount of loquats locals eat it is good to know that Loquats are high in nutritional value and both the fruit and leaves can be used medicinally.

According to www.nutritionandyou.com they are rich in insoluble dietary fibre (that’s a good thing) and an excellent source of vitamin A. They also contain flavonoid antioxidants along with potassium, manganese, calcium and other minerals.

Wikipedia reports that Loquat syrup is used in Chinese medicine for soothing the throat and is a popular ingredient for cough drops.

In Japan, loquat leaves are dried to make a mild beverage known as biwa cha which is said to beautify the skin and heal inflammatory skin conditions such as psoriasis and eczema and to heal chronic respiratory conditions such as bronchitis.

All this useful deliciousness does beg the question as to why we don’t farm Loquats. The answer may lie in our limited amount of arable land and that, according to California Rare Fruit Growers Inc., the process is fairly labour intensive. Plus, by now, Loquats have become a national, and communal, resource and people would probably resent paying for them anyway.

There is also the fact that there are a number of varieties of Loquats in Bermuda. According to a “Field Notes” article on The Bermudian website, as many as 10 different varieties had been identified in Bermuda and they don’t all taste or look the same. Many are small and acidic, while some are similar to those grown specifically for consumption in California.

Which brings us to how to eat a Loquat. Some people peel them, some squeeze the seeds out and suck on the juice and pulp while others pop the whole thing in their mouth and spit the seeds. It may depend on the variety being eaten but it doesn’t really matter, because for nearly two centuries we’ve been able to spend our winter and spring walks plucking Loquats for free in the great outdoors. Thank you Governor Reid.

Read more about the agricultural exploits of Governor Reid HERE!