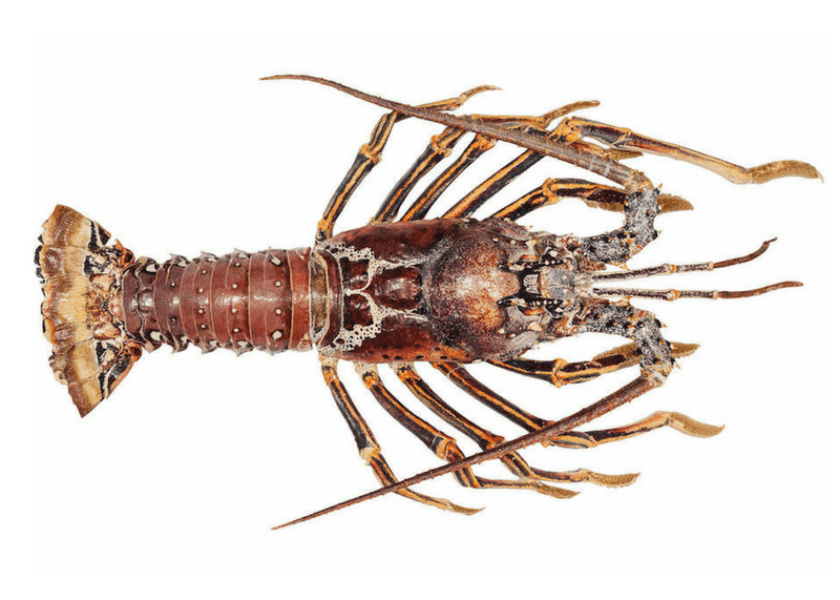 Ah, September: Labour Day, school back in, a mite cooler and lobster season! Can it get any better than this? From September 1st through March 31st each year, it is legal to possess, eat and trade in this wonderful crustacean commodity.

Now, first, let’s get this clear. This is not your claw-bearing northern, Boston or Nova Scotian lobster. This is a spiny lobster, properly known as a Caribbean spiny lobster, a term largely ignored by us who believe that they are Bermuda spiny lobsters. To be sure, they are covered in spines, which make for pretty formidable armour, but the lack of claws means that just about all the meat is really in the tail.

Spiny lobsters are found from Bermuda south, past Florida through the Caribbean down to Brazil. The life cycle includes planktonic phases and lots of other complex biology but results in a miniature lobster that takes something like two years to reach legal size. That size varies somewhat from place to place, but here in Bermuda the carapace or main body must be at least 35/8 inches long or the tail must weigh at least 12 ounces. Possession of, or pretty much having anything to do with, under-sized lobsters in or out of season will lead to trouble.

Spiny lobsters are an important resource for commercial fishermen during the winter season when the fishing is uncertain and, particularly during the festive season, many locals develop a sudden hankering for fresh lobster.

This species was not always that desirable. Back in the 1950s and into the early 1960s fishing guides and local anglers used to catch spiny lobsters wholly and solely for use as bait for—get this—of all things, Bermuda chub. The latter was seen as an important game fish and not surprisingly, the fish had a fancy for lobster. Naturally, this didn’t last forever and the crustaceans came to be a delicacy for humans.

There are a number of ways to enjoy lobster. Obviously, you can buy them or dine out, but first of all, there is the joyful possibility of being able to catch your own—up to two a day if you know how to dive, use a noose and have a licence.
There are certainly those who are willing to brave the waters around the reefs in search of a spiny lobster. For this they pay their licence fee and then have to spend hours exhausting themselves as they peer into cracks and crevices in the hope of finding a crawler. There are some who are really good at this and spend a minimum of time overboard but for many, it is one long, fruitless labour that almost inevitably winds up with the diver at a restaurant with lobster on the menu.

Not that this isn’t for the faint of heart either; this is deep-pockets territory. Generally served on the half shell, half a lobster is all you get—unless you spring for a whole one. Most restaurants will assure you that they are local lobsters but that brings us back to the Bermuda/Caribbean thing. Literally thousands of lobsters are imported as frozen product from Florida and the Caribbean region where they are an industry. The exporters grade them out by size, and ship them pretty much all over the world, with some of them coming to Bermuda. The grading procedure works pretty well because a case of frozen spinys has them all looking like peas in a pod—wonderful for chefs who don’t have to worry about diners eyeing up the lobsters on the plates at the next table and wondering if someone got a bigger one than they did.

And did you ever wonder how some places always have lobster on the menu even though there has been a howling gale for a week? Well, now you have a pretty good idea. It will still taste pretty good though; it is the exact same species and may well have been better cared for. You know what you have, you will like it and you’ll be able to honestly boast to your friends that you had lobster for dinner. Just be sure to crunch up the shell before sending your plate back to the kitchen. It is well-known that some unscrupulous restaurateurs used to use fillet of red hind and other such stuffing to repack the undamaged shells and to serve those up to the next customer.

Now, the truly brave will go the route of stopping by a roadside fisherman’s stand and purchasing one or more live lobsters. These will be local—live ones cannot be imported. If you want to try this, make sure that the fisherman ties them up well. A lively lobster running loose in the kitchen can be more problem than you might imagine. They also show a strong dislike for the boiling water that you drop them into. The squeamish may feel that letting them go to sleep in the freezer is the more humane thing to do, but lobsters won’t like it in there either—and you might want to make sure there aren’t any plastic bags within their reach that they can shred in their indignation. One fine fellow who will remain unnamed thought that doing them up on the barbeque would be a novel idea. The lobsters thought otherwise and proceeded to crawl off the grill, much to his embarrassment and the amusement of his guests!

And, then again, a few may even forget that they have a lobster or two in their freezer. That should be no problem; they will keep quite well for a good while. Where care must be taken is in their consumption. While they will still taste good, for some reason dining on lobster out of season makes neighbours peer through your garbage and leak reports of your misdemeanours to the authorities.

Which brings us to the “other” lobsters. There are actually several species, most of which are unknown to the consumer, but there is one that stands out. Preferred to the spiny by those deeming themselves more discerning, this smaller cousin is the guinea chick lobster; in the old days called star lobster. Darker in colouration and looking like they spend their time in a spray of white paint, dappled as they are, these delectable little fellows are much harder to come by. On the plate, they were said to be sweeter and tastier than their larger cousins.

Guinea chicks live deeper than the spinys, so are out of the reach of divers and are really only caught in traps. For some reason, almost all the caught ones are males, so not a whole lot is known about them other than the fact that they make a tasty dish. Best of all, the fishery for them was originally during the summer when you couldn’t have a spiny lobster. They were always the province of a very few specialist fishermen who trapped them and somewhere along the line they must have gone up in value too. Whereas a serving used to be as many as three whole ones, now it is down to one or two— if you can get them, that is.

What is really confusing is that relatively recently the powers that be decided that the guinea chick season should be the same as the spiny lobster season. That means now you can only have them during the autumn and winter months. A bit of a nuisance for those of us who like them, not to mention a bone of contention for the fishermen who have to decide how to allocate their gear and, probably, for not a few restaurants which are lobsterless in the summer. Still, I should not complain; they must know what they are doing. But, then again, that wouldn’t be Bermudian, would it?