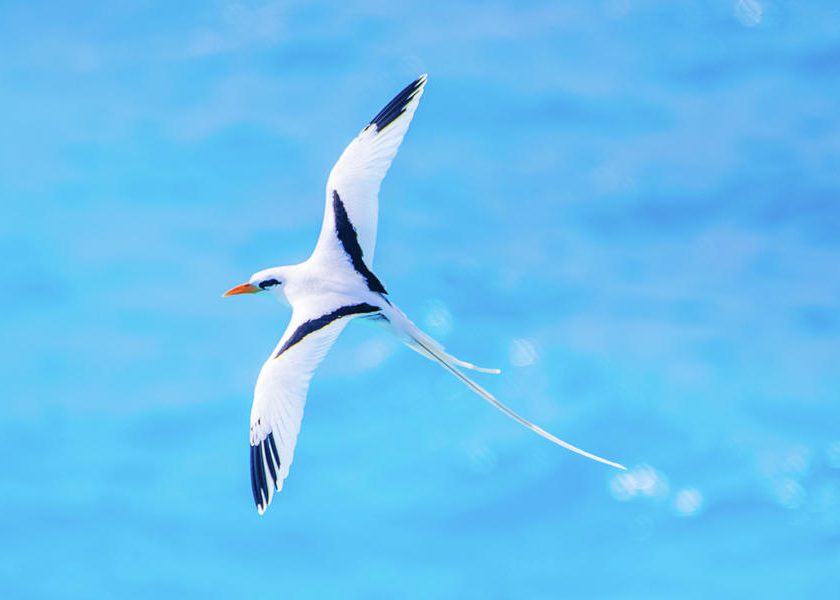 The Bermuda Longtail: Life in Flight

This sage advice is usually attributed to Mark Twain, the writer and humorist with a deep affection and connection to Bermuda. It is not such a huge flight of fancy to imagine that Twain was sitting admiring the grace of Bermuda’s Longtails when this insightful thought popped into his head.

Watching Longtails, or White-tailed Tropicbirds (Phaethon lepturus catsbyii), is indeed an opportunity to consider the deeper meaning of life, particularly here in Bermuda. Their elegance and beauty holds the eye, like a flame dancing in a campfire, but it is their playfulness and joy that tugs at the soul. They exude a freedom we can all aspire to.

Longtails are also the forerunners of our tourism industry, and while Twain may (or not) have been inspired by their free flowing flight, a more pragmatic entrepreneur may have considered the Longtails’ blissful summer excursions to Bermuda and thought: “We could get people to do that…”

Arriving around the beginning of March, after what must surely be a less than comfortable winter at sea, Longtails spend their summers here enjoying life.

They first appear long after the sun is up, careful not to bother the locals, and spend the rest of the still tolerable mornings in effortless flight, playfully chasing and teasing each other for hours on end. Their distinctive chirps carrying across the gentle breeze in a daytime rebuttal to the night song of the Tree Frog. The mid-flight tango of the male and female courtship appears both daring and risque and belies the real reason they come to Bermuda, to make baby Longtails.

Perched in nests, burrowed into cliff top crevices along our many shorelines, their summer homes overlook some of the finest vistas Bermuda can offer. As family birds, Longtails mate for life, producing one egg each year that they co-parent, alternating hunting and baby sitting duties until the reared chick heads out to sea near the end of summer. Longtails are also long-term, repeat visitors, returning each year to the same nest site, assuming it is still there.

By comparison, the human inhabitants of Bermuda sometimes seem completely oblivious to the fact that we live in paradise. Longtails are not cursed with this affliction, perhaps because they spend five months at sea each year, prowling the Sargasso Sea for squid, fish and, in what must be a spectacular site, flying fish.

According to the West Indian Breeding Seabird Atlas website, when hunting they fly about 60 feet above the water and “plunge dive” to catch their prey. While nesting they will forage more than 50 miles from the nest site and have a huge range of up to 600 miles during the winter months.

A Longtail’s life on the ocean is obviously a bit of a mystery and it is intriguing to consider thousands of them surviving for months on the open ocean.

A University of Newfoundland study, “Distribution and at-sea behavior of Bermudian White-tailed Tropicbirds”, revealed that the Longtails’ range “extended as far west as North Carolina and as far east as the mid-Atlantic Ridge.” The study also found that they spent about 40 percent of the daytime in flight and 5-8 percent of the night in the air. That’s more than 12 hours a day bobbing around in the ocean. In fact, they spend so much time not on land that they find it difficult to walk when they are.

Of course, Bermuda Longtails are not the only type of Tropicbird, but we are home to approximately half of the White-tailed version in the North Atlantic, with an estimated 2,500 to 3,000 pairs that nest in Bermuda. The others can be found further south in the Caribbean.

The Bermuda Department of the Environment website says that our bird is one of six subspecies. The other five can be found in locations as diverse as the Indian Ocean and the Mozambique Channel. What they all seem to share is an affinity for small, isolated islands, with populations on Christmas Island, Ascension Island, Europa Island and the Midway Atoll.
Whilst Bermuda is indeed isolated, the Longtail still faces a number of threats here and our population is thought to be in decline.

The main threats are both natural, like storm surge and coastal erosion, and man-made, including coastal development and predation by dogs, cats, rats and more. Longtails are protected by both the Protection of Birds Act, 1975 and the Protected Species Act, 2003.

Given the global significance of the Bermuda Longtail population local conservationists have worked for many years to help ensure their well-being. One of the most significant successes is the development of igloo-shaped nest boxes that are made from cement-coated styrofoam and are fairly easily installed along cliff tops and ledges.

An Audubon Society article, written by Dr David Wingate, revealed that a grant from the Foreign & Commonwealth Office of the UK for conservation in the Dependent Territories was used specifically for the development of the igloos, which were introduced in 1997.

By all accounts the boxes have been readily accepted by the birds and are (maybe) yet another Longtail-inspired innovation for Bermuda, fractional condominium ownership.

A visit to a local jewelry or souvenir store or a look at the Bermuda $50 bill will indicate the iconic importance of the Longtail to Bermuda. That so much effort has been put into their conservation reflects the global significance of our population.

As a symbol of life in Bermuda, Longtails’ arrive as a harbinger of spring and remind us that much of the beauty in life can be found from dancing in the daylight and singing in the breeze.

You can learn more about Longtail igloos, their purchase and installation at www.audubon.bm.