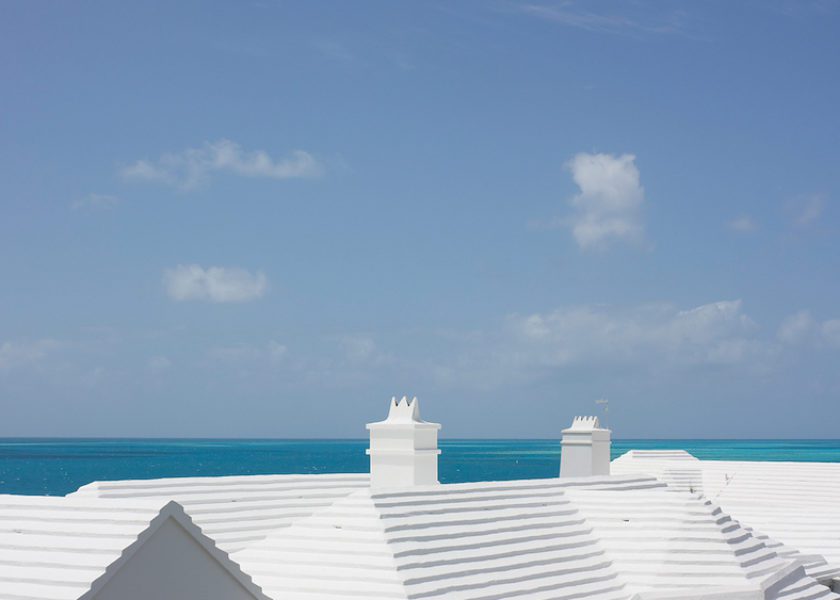 One of the best things to tell people about Bermuda (and there are lots of them) is that we catch our fresh water from the sky and store it under our homes because we have no natural source of fresh water – like lakes, or rivers. Whilst often left unsaid, the inference is our water is cleaner, better and free.

Of course, today, this is a bit of an embellishment, what with underground wells or “lenses”, desalinization plants, the cost of maintaining the roof and tank and the threat of aviary bacteria, our water system is good, but not perfect. Still, it did allow people to settle Bermuda and remains a living example of how scarcity can drive innovation and conservation – and explains how Bermudians mastered the art of the five-minute shower. And what makes the model work? The Bermuda roof.

“Water, Water Every Where”
One wonders at what point the first British settlers reflected on the paradox of their existence in Bermuda: A paradise of natural abundance (the birds literally landed on people’s shoulders so they could eat them) yet no water to drink. Solving that conundrum appears to be the first in a long line of creative adaptations for this thriving but tiny, far-flung, island in the middle of the ocean. To follow were the fastest ships on the sea, a little cocktail known as the Dark ’n Stormy, a new fangled industry called tourism and the global juggernaut of reinsurance, but harvesting rainwater came first. Those early settlers didn’t start out collecting water off their rooves, which were originally made from palmetto fronds. It was only as Bermuda builders shifted from cedar framed homes in the late 1600s (the wood was needed for building those fast ships) to stone ones that the Bermuda roof emerged as a key feature in local architecture, and instrument of great pride for Bermudians.

Today, there are strict regulations in our building code that dictate both the water catching ratio for each roof (80%) and a minimum tank size per roof area (eight gallons per square foot).

So important is the roof that is has its own ceremony – the “Roof Wetting”. This is a time-honored tradition for newly constructed buildings that involves the contractor, the architect, some family members and/or dignitaries, ascending a ladder with a fresh bottle of Gosling’s Black Seal Rum, of which a splash is poured onto the new roof and another down the throat of the participants. That’s right, here in Bermuda we climb ladders onto our rooves and drink rum straight from the bottle.

Built to Last
The defining characteristics of the Bermuda roof are that it is built with Bermuda limestone tiles known as Slate (and more recently a synthetic product called Duraslate) laid in a stepped fashion over a wood frame, with a stone gutter near the edge of the roof to funnel the water down a pipe and into a water storage tank – usually under the building.

The slates are held together by mortar and then ‘white-washed’ to create that distinctive ‘clean’ Bermuda landscape that none other than Mark Twain compared to “the white icing of a cake”. Pretty yes, but also robust. One reason for Bermuda’s hurricane resilience is that we have stones rooves sitting on top of stone buildings that are anchored to the land with a stone tank full of water – the big bad wolf is generally held at bay.

The white of the roof is also credited with reflecting ultra violet light which helps sanitize the water. Originally the paint was a lime-based mortar that did, in fact, have anti-bacterial qualities but that technique, which is notably more difficult to prepare and apply, gave way to a cement-based paint and, more recently, an acrylic latex-based, or “Elastromeric”, paint.

The stepped style of the roof serves to slow the water as it descends to the gutter. The steps also make staying on the roof a little easier while painting it. Which brings us to maintenance and cleanliness.

Quality Water
The government recommends painting a Bermuda roof every two years, although the new Elastromeric paint is supposed to last up to five years. It is a job many Bermudians tackle themselves although there is no shortage of painting contractors willing to take on the task. No matter the practitioner, or the paint used, applying it is a strenuous and sweltering process that involves power-washers, Clorox and an over-sized paint brush on the end of the long pole or “Staff”.

Boasting that, “I staffed my roof today” may prompt a quizzical glance from a visitor but locals will nod appreciatively. The cement-based paint comes in 50-pound bags, and the powder is mixed with water into five gallon buckets. These are then muscled up a ladder onto the roof. The Staff is about eight feet long and the brush about one slate wide (eight inches). The brush, dunked in watery cement, is heavy and gliding it back and forth across thousands of square feet of roof is an art, that produces big blisters. And that’s all after the roof has been powered-washed and scrubbed down with a Clorox solution to kill bacteria.

Of course, no discussion of the Bermuda roof would be complete without addressing the “water tank” and the cleanliness of the water. Despite screens at the top of the drainpipes, some debris inevitably gets into the tank and settles at the bottom. The government recommends draining the tank, which is basically a cement-washed room under the house, and cleaning and repairing it at least every six years.

For the bulk of Bermuda’s history a painted roof and clean tank provided one of the world’s freshest and most reliable sources of water. In modern Bermuda, it is estimated that the roof provides 50-70 per cent of fresh water used in households. Underground wells and desalination plants provide the rest.

The threat of drought is real for Bermuda but the consistency and volume of rainfall does not appear to have changed much over time. However a new threat to our water’s cleanliness has emerged. Studies have confirmed that salmonella bacteria can be, and is, a source of gastrointestinal illness in Bermuda. The threat, according to 2016 study, lead by doctoral student Shevron De Leon, found that the Island’s feral chicken population spreads disease to other animals that are able to reach our rooves and contamination is happening at a fairly alarming rate – not that Bermudians are particularly concerned.

The researchers reported that: “Most Bermudian residential water is contaminated by bacterial faecal indicator species. Depending on the indicator, between 67 and 90 per cent of tap samples surpassed government safe drinking water standards and few households treat their water. Drinking water is likely a source of gastroenteritis.” This confirms the findings of a 2011-12 study showing a yearly incidence of gastroenteritis at one episode per person per year. However, and this says a lot about the pride Bermudians take in their water, of the 861 people surveyed NONE believed their drinking water was the cause of their illness.

To combat the bacteria problem the Health Department recommends adding 2-4 ounces of bleach to every 1000 gallons of water, every three months.

What’s not indicated in the studies is how severe the symptoms of the illness are, and at least one health official said that adults who grew up in Bermuda may have developed some immunity to the bacteria, but there is certainly a threat to bottle fed infants, new residents and people with compromised immune systems.

Too bad we can’t solve the problem by just pouring more rum on the roof.

Information regarding the research carried out on the health of Bermuda’s tanks taken from www.bermuda-online.com.