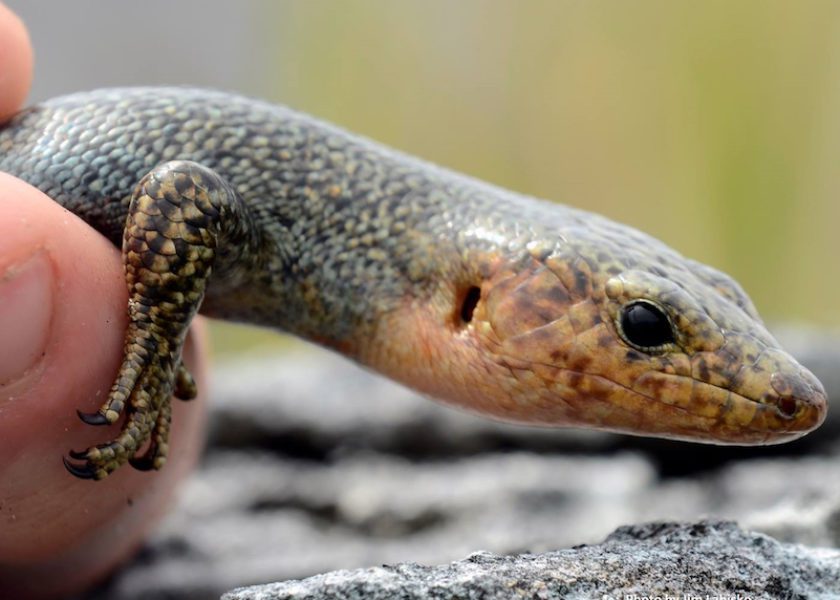 Bermuda has been assigned a number of notable monikers over the years; “Isle of the Devils”, “Gibraltar of the West” and, more recently, “Risk Capital of the World”. However, these all pale in significance to the title of “Evolutionary Life Raft”.

For that little tag we can thank one of our longest surviving residents, the Bermuda Skink, or Bermuda Rock Lizard. Sadly, the title may not stick as today Bermuda’s only land-based endemic vertebrate sits on the brink of extinction.

It’s hard to believe that a 10+ million-year-old lizard and Bermuda’s first settlers have much in common, but for both Bermuda provided an existential rescue that ensured survival at a pivotal juncture in their history.

Interestingly, they both seem to have thrived on these far-flung shores for very similar reasons; limited competition for resources and little in the way of natural predators. They also arrived from opposite directions, and, as you will read, the skink has subsequently completed an eastward journey to Britain.

According to a 2010 paper by Matthew C. Brandley and an international team of researchers, the Bermuda Skink (Plestiodon longirostrisis) is “the last representative of one of the earliest North American lineages of skink that diverged 16 million years ago.”

Mr Brandley et al. go on to describe how the species subsequently died off in North America and, through a process called “paleoendemism”, Bermuda provided a literal “life raft” that has preserved “millions of years of unique evolutionary history.”

This was only possible because the skink somehow migrated 1000km to Bermuda sometime in the last 400,000 to 2 million years. This almost assuredly happened as an ocean voyage because Bermuda has never been connected to North America via land.

Mr Brandley’s paper culminates with the “remarkable conclusion that a two million-year-old island contains the sole survivor of an ancient lineage that predates the existence of Bermuda by well over 10 million years.”

While from a planetary perspective Bermuda might be pretty young, by almost any other measure two million years is a really long time. So it is particularly poignant that the threat to the skink’s survival wrought by human habitation has occurred in just 400 years.

Prior to the arrival of humans skinks pretty much had the place to themselves, a sort of skink Eden, shared primarily an endemic tortoise, Hesperotestudo bermudae, and a native night heron, Nyctanassa carcinocatactes, (both now extinct) and a, still living, native terrapin (Malaclemys terrapin), which only arrived within the last 3000 years.

All that has now changed with Bermuda Skinks under increasing threat from habitat loss, vulnerability to discarded bottles and predation from introduced species like rats, cats, kiskadees, cane toads and others. The skink is listed as critically endangered by the IUCN Red List and protected under the Bermuda Protected Species Act 2003.

In 2010, the Bermuda Skink Recovery Plan, published by the Department of Conservation Services, reported only 2300-3500 Bermuda Skinks remaining on our islands, and therefore the planet. They exist in several “fragmented” populations, most of which are on outlying islands in the East End where they live along the rocky coastline.

One look at the Bermuda Skink should be enough to warrant protecting it. The creature is clearly ancient, appearing, and moving, more like a snake with legs than a lizard. The skink actually sports scales and has clawed toes. Those toes mean the skink cannot clamber up smooth vertical surfaces, like the more common anoles, and make it vulnerable to getting stuck inside discarded glass bottles, where they can quickly die of heat exhaustion.

Bermuda Skinks mature in two to fours years and can live up to 20 years. They inhabit a very small home range of about 10 square metres, which is one of the reasons they are so vulnerable to habitat loss.

Fortunately, local and international conservationists continue to study the skink with the aforementioned Recovery Plan identifying the some of the key areas for conservation – habitat identification, protection and management and possible breeding in captivity.

Most recently, PhD student Helena Turner, in collaboration with Chester Zoo, Bermuda’s Department of Environment and Natural Resources and the Manchester Metropolitan University, has been studying the conservation and population status of the Bermuda Skink and, in 2017, located two new populations on offshore islands. While this is a great find it does not alter the endangered status of the species.

To that end, in an almost a last gasp effort, the Chester Zoo embarked on a breeding programme for Bermuda Skinks in 2013. Four years later, and after 43 days of incubation, seven skinks were successfully hatched at the zoo. Previously there has been successful captive breeding in Bermuda but this the first time conservationists have bred Bermuda Skinks outside of Bermuda.

So, in the most improbable fashion and after as many as 2 million years, the Plestiodon longirostrisis has completed the reverse journey of those early English pioneers and arrived in Britain via Bermuda. Hopefully the hard work and perseverance of conservationists will ensure the survival of this ancient creature.

In Bermuda we wear our nicknames like badges of honour, “Evolutionary Life Raft” seems like one we would want to live up to.

You learn more about Helena Turner’s work and the conservation and breeding efforts at Chester Zoo.

Photo above by Jim Labisko