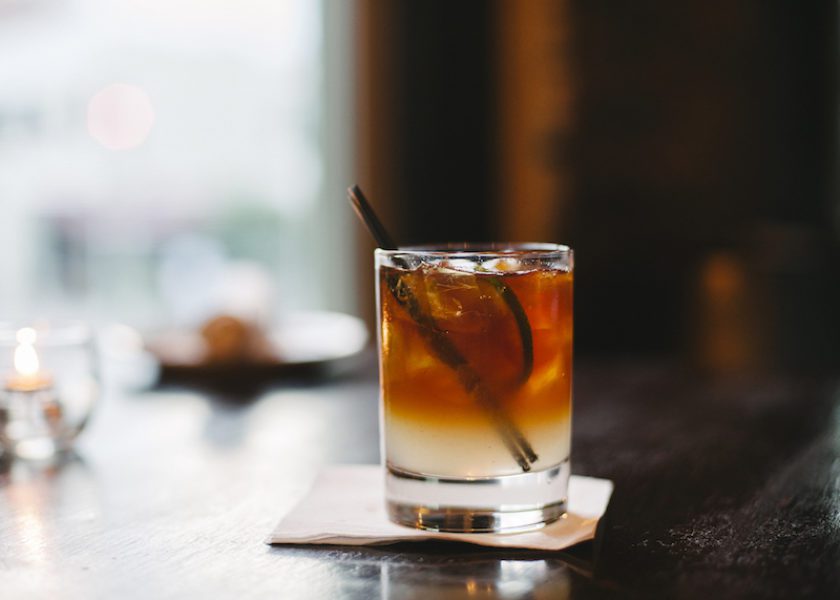 The History of the Dark ‘n Stormy

The Dark ’n Stormy is the inexorable concoction of Bermuda’s British history, a literal fusion of our merchant and naval traditions. That it is today one of only four internationally trademarked cocktails further reflects Bermudians’ entrepreneurial spirit and legacy of punching above our weight on the international stage.

Of course, before the Dark ’n Stormy became a libation worth protecting it had to be ‘invented’ and that story is what makes the drink uniquely Bermudian.

First the Dark.
In the early 1800s William Gosling was selling liquor in London , but the New World beckoned. So, in 1806, his son James, on a chartered a ship named the Mercury, set out for America with 10,000 pounds sterling worth of wines and spirits. To put this in context, the UK Office for National Statistics calculates that £10,000 in 1800 would be the equivalent of £786,000 in 2017, that’s a lot of booze.

The voyage of the Mercury, however, did not exactly go to plan and, to the lasting benefit of Bermuda’s imbibing public, the ship never arrived in America.

Instead, in an interesting contrast to the arrival of Bermuda’s first English settlers, the Mercury was becalmed in the Atlantic for so long (91 days) that the ship’s charter expired and the beleaguered crew put in to Bermuda.
Again for context, while the expected time for a voyage from England to America in the early 1800s varied hugely, Columbus took only five weeks to get across the Atlantic in 1492 and the Mayflower got to Plymouth Rock in just 66 days. By any measure the Mercury had spent a long time at sea and they were still 700 miles short of their destination.

Still, there is a wonderful irony to the descendants of the passengers of a becalmed ship one day producing a world famous drink called the Dark ’n Stormy.

When James eventually arrived in Bermuda he liked it so much he decided to stay and set up shop on King’s Parade in St. George’s. In 1824, the Goslings shop was relocated to Front Street in Hamilton (where they still have a store), and in 1860 the Goslings imported their first barrels filled with rum distillate.

Gradually they refined their blending process and ultimately produced one of the world’s best and most distinctive dark rums – Gosling’s Black Seal.
Up until 1914 consumers of Gosling’s rum would refill used bottles straight from the barrel. However, during the first World War the Goslings began distributing their rum in champagne bottles collected at the Royal Navy Officers Mess. These bottles were sealed with a particular black wax which would eventually give the rum its distinctive name.

Now the Stormy.
According to various sources this same group of naval officers, and their sailors, either produced homemade ginger beer or the Royal Naval Officers Club ran a ginger beer ‘factory’ in Dockyard.

Exactly how rum and ginger beer met in the glass is about as clear as the drink itself, but it seems ginger beer was popular with the navy, possibly because it was good at easing seasickness and rum was ubiquitous at the time.
Whether the combination was devised by a forerunning mixologist or a drunken sailor spilling his rum into his mate’s ginger beer, the navy had nevertheless conspired to produce one of the world’s great elixirs.
The discovery of a beverage that both lifted the spirits and soothed the stomach was surely cause for great celebration. Somewhere amongst these celebrations the drink earned its rather ominous moniker when a sailor, allegedly, quipped that his drink was “the colour of a cloud only a fool or a dead man would sail under.” And that is how legends are born.

Finally, the (patented) Dark ’n Stormy.
Between the end of WWI and 1991, Goslings and the Dark ’n Stormy became synonymous and inseparable, and not just in Bermuda. As the company slowly built its rum export business the cocktail went with it to the United States and beyond.

But with success comes imitation and other rums started to suggest mixing their rum with ginger beer to produce a drink of the same name.

So in 1991, Gosling Brothers Ltd. filed, and won, two trademarks on the recipe. Suffice to say this was no easy trademark to acquire, of the thousands of cocktail recipes on bar menus around the world only three others are similarly protected – the Hand Grenade, The Painkiller and Sazerac.
Since earning the trademark the company has defended it on several occasions, taking action against other rum makers and even a rum-blogger (yes, there is such a thing).

And what is this recipe that is so vigorously guarded?

Well, take a tall glass, fill it with ice, add 4 – 5 oz of ginger beer (no brand is specified) and top it with 1.5 oz of Gosling’s Black Seal Rum. You can also garnish with a lime wedge but that is optional.

That’s it. A simple recipe born from the mists of history to become a legendary tale that any sailor (or Bermudian) would be proud to tell.