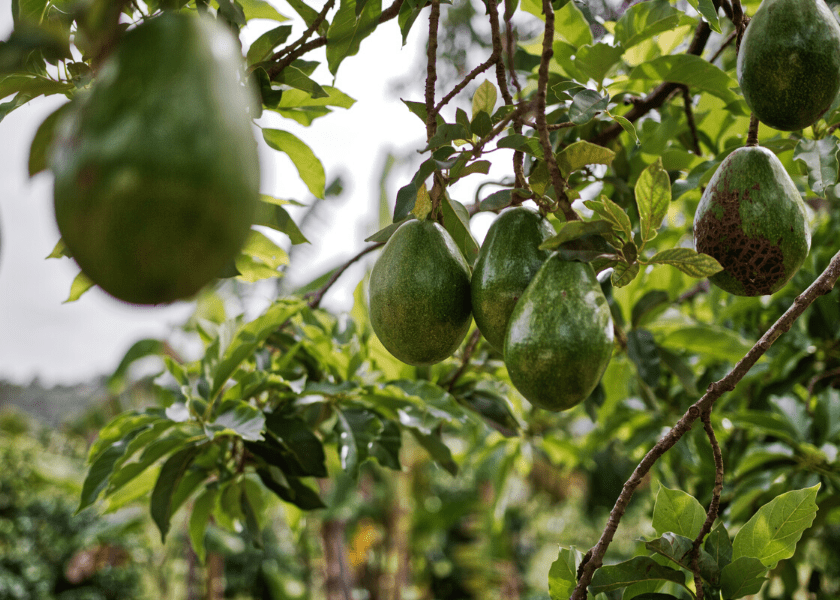 From luscious loquats and lemon grass, to rosemary and pawpaws, Bermuda’s homegrown wild treats – often found roadside –  are abundant. Here’s our top ten wild fruits and herbs, where they came from and how to eat them.

1. Avocado – Persea gratissima
Introduced to Bermuda in 1835, the avocado hails from the West Indies. Trees bear, with luck, after three to four years August through November. Because they are “self sterile,” the avocado is nearly impossible to pollinate without a nearby tree of the same variety. Ranging from fist-sized to simply gigantic, the alligator pear, as it is also known, often suffers from neglect. Use it in codfish breakfast plates, chop it into more salads, stuff it with crab ‘louis;’ make tangy guacamole, give it a squirt of lime juice and a sprinkle of Crazy Jane’s salt for a snack, even use it as a garnish.

2. Christophene – Sechium edule
This member of the pumpkin family is also known as a chayote, chocho, and in France, as the mirliton. The pear-shaped, pale green, smooth-skinned vegetable has a fine firm texture and is somewhere between a courgette and a cucumber in flavour. The vegetable grows on tendrily vines and is pretty easy to cultivate. Baked with a little butter and sprinkled with cheese, stuffed, sautéed, or in a soup, the very low-calorie christophene is quite versatile. Find it in local markets. Keeps well in the refrigerator for up to two weeks.

3. Fennel – Foeniculum vulgare
Governor Tucker’s instructions in 1616 included everything from service to God, to planting sugarcane, mulberry and sowing “Fennell, Bazil, Mariorum, and Onion seeds.” Today, wild, bulbless fennel is ubiquitous in many parishes. Hip-high forests cover areas of Southampton beaches and it shows up along lanes and unwanted in flower beds. Another native of the Mediterranean that loves to be near the sea, fennel is very adaptable. Fennel gave Greek athletes courage and strength; it was a symbol of flattery, and a protection against witchcraft and evil spirits. To the Anglosaxons, fennel was one of nine sacred herbs used in both kitchen and apothecary. In Italy, fennel shows up in everything from hors d’oeuvres to dessert. Its fresh, sweet taste is often associated with anise or licorice. Flavour a tomato soup or sauce with chopped fronds, season pork roasts, lamb or bean dishes with it, sprinkle some on a salad, or make a savoury butter with it. 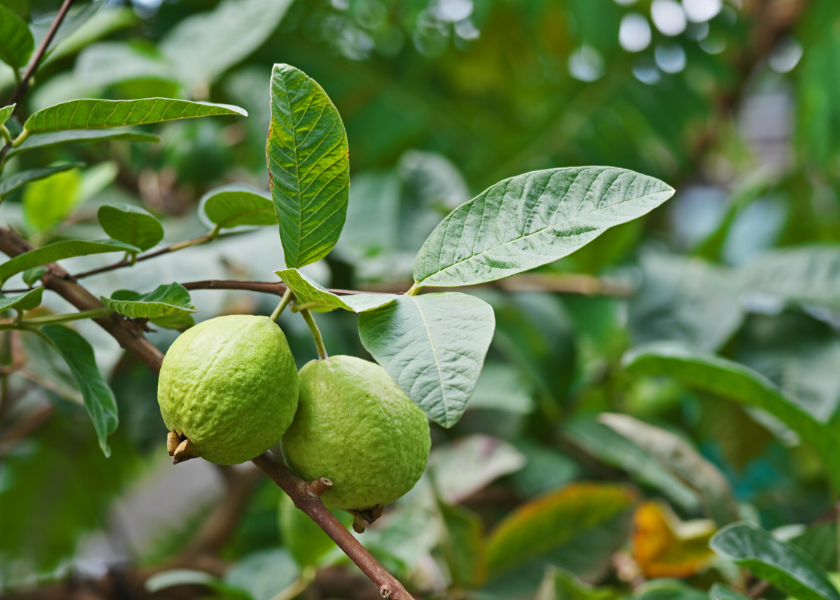 4. Guava – Psidium guayava
A South American native, guava was part of the earliest cultivated fruiting trees in Bermuda. Ovoid or rounded, anywhere between one and four inches in diameter, with a yellow-green to pale yellow skin, occasionally seedless but more often packed with annoying seeds. The fruit may taste like strawberries, banana, pineapple or some combination. Elsewhere, it is made into jelly (popular in hispanic cuisine). A great source of Vitamins A and C. Peeled, puréed and sieved guava makes a tasty ice cream topping, or an unusual, tasty and sweet “fool” or syllabub.

5. Lemon Grass – Cymbopogon citratus
Natural successor to the trendy flavours of ginger and cilantro. Grey-green stalks are stiff like beach grass and have a slightly tubular scallion-like base. The somewhat floral aroma combines lime, lemon peel and new-mown hay. Native to Malaysia, it is used extensively in Far Eastern and Pacific Rim cuisine, and as a treatment for malaria in Western Africa, where it is appropriately called “fever grass.” In Central America, it is made into a tisane taken with brandy. Freezes well if carefully wrapped in tin foil. Lemon grass is happy with seafood, fish, poultry and some meats. 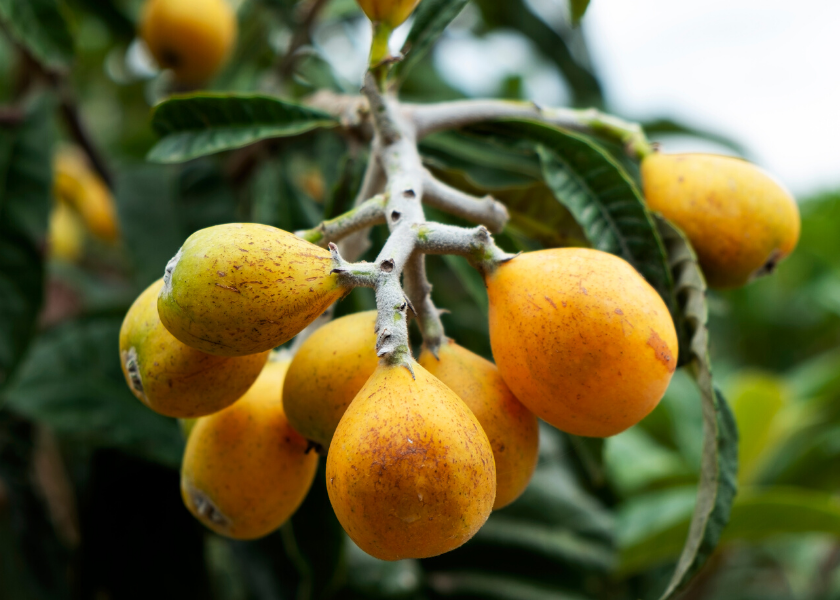 6. Loquats – Eriobotrya japonica
Along with the startlingly fragrant wild fresia, loquats are the most visible harbinger of spring. Also called the Japanese medlar and nispero, the fragile fruit is popular in China (where it originated), Japan, Central and South America, and throughout the Mediterranean, in Spain and the Middle East. Yellow to pale-orange to sunset-gold, round or tear-shaped, fuzzy and often freckled, the sweet and tart flesh tastes of plum, lychee, apricot, grape and has anywhere from one large to five small dark brown seeds. This delicacy we take for granted is highly prized in other parts of the world where it is not so easily accessed. Most delight in them right off the tree. They also make great jams, chutney, pies, cakes, liquor (such as Bermuda Gold liqueur) and salsa.

7. Natal Plum – Carissa macrocarpa
Ideal for protective thorny hedges, the natal plum fruits prolifically in the fall. You can see them almost anywhere in Bermuda, their stark white blossoms and garnet red fruit simultaneously set off by shiny deep green leaves. There is a marvellous stretch of them just past the parking area at Ferry Reach Park; patches of them punctuate Harbour Road, and a thick mass overlooks the farm at Astwood Park. Eat the juicy fruit fresh, add to a fruit salad, or make a brilliantly hued jam or jelly. 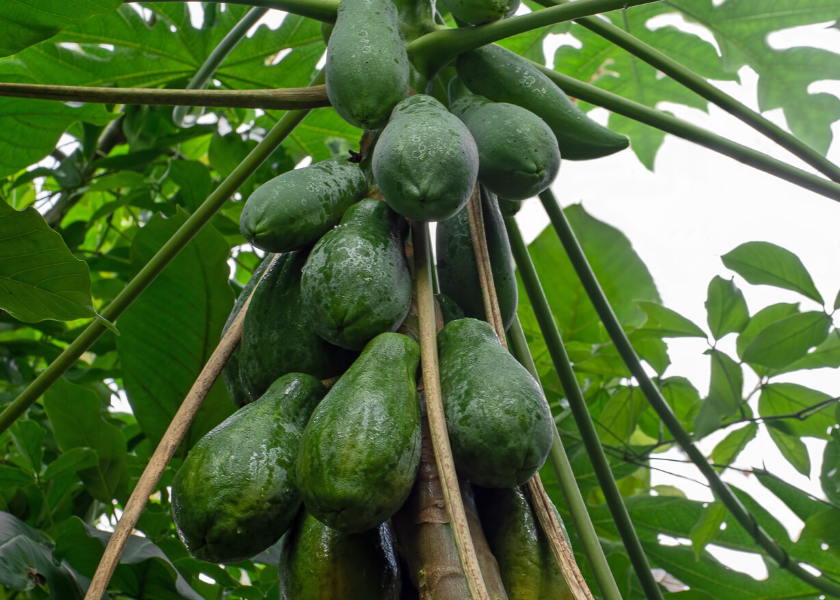 8. Pawpaw – Carica papaya
Vegetable, fruit, meat tenderiser — the pawpaw is all of these, and effortless to cultivate. In fact, pawpaw trees are so prolific, most people don’t bother planting them anymore — they just spring up in your yard. Mottled bright orange when ripe, they can be as small as a billiard ball or bigger than a grapefruit. The tree-ripe pawpaw is delicious as a breakfast treat with a sprinkling of lime juice. Just cut in half, remove the black grey seeds from the pale gold interior and enjoy. Use to make well-spiced pawpaw pie, very much like pumpkin pie; green as a vegetable, and in the ground meat and tomato casserole we call pawpaw montespan. Low in calories, rich in Vitamin C. 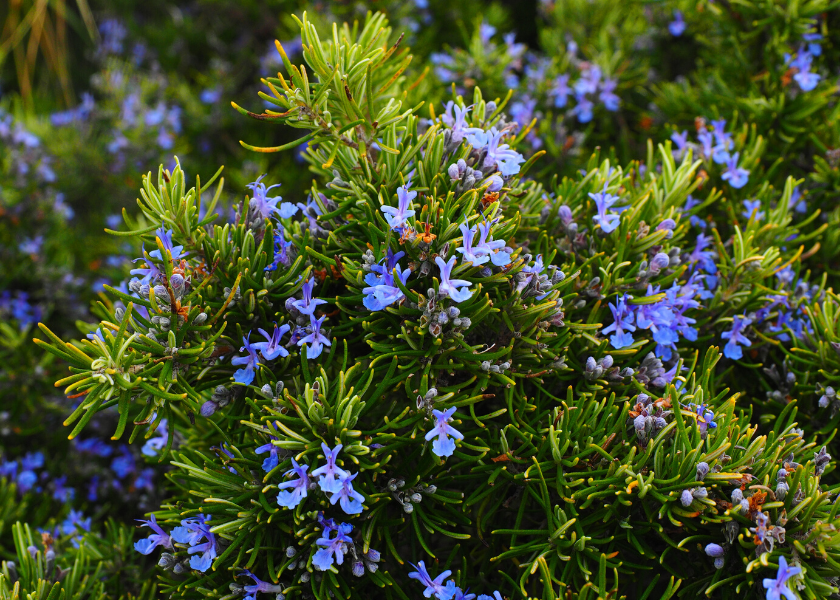 9. Rosemary – Rosmarinus officinalis
Cascades of rosemary are commonplace, but not many people explore the wonderful qualities of this herb. Rosemary was considered the herb of remembrance, prompting Greek scholars to wear wreaths of it on their heads. At weddings, it was carried as a symbol of fidelity. In Tudor times, it was grown in pots, as topiary and espaliered. Use leaves (as well as tender sky blue flowers) in everything from tisanes, to stews, sauces, with chicken, fish or pork, in herbal bouquets garni, and hung in closets, bound by a colorful ribband, to make a lovely natural moth repellent. Common in the Mediterranean, it loves the seaside but does just as well inland.

10. Surinam Cherry – Eugenia uniflora
The Surinam cherry is known as the petanga by the Portuguese, credited with spreading the cultivation of this Central American shrub throughout the world. Today, it is considered a garden hedge rather than a food source. The surinam cherry is a dense evergreen that gives grooved, dark crimson, spicy sweet berries that look like tiny lanterns. Delicate white blossoms appear in March and fruit in late spring (other times as well). Sour sweet berries may be eaten raw, as every kid knows, and make pretty and tasty jams and jellies.